It’s Floyd Mayweather’s ring, and they’re dying to fight in it 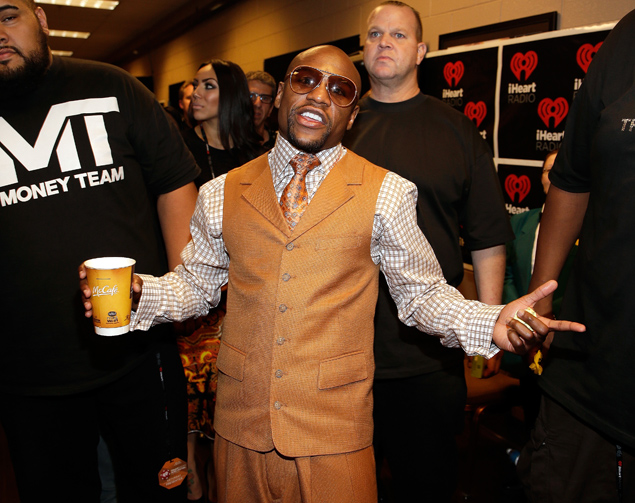 Ask that question to anyone at your local PAL boxing gym and the answers will vary. Some would point to his shoulder roll defense technique, which other boxers of varying notes have tried to imitate to limited success. Not a few would state his right hand leads, which, though powerful and quick, constitute just one component of Mayweather’s deep arsenal.

The asset that is most responsible for Mayweather’s incredible success in the ring is one that can’t be seen in highlight reels but still keeps potential opponents awake at night.

While the undisputed pound-for-pound best boxer on the planet has been responsible for numerous bonehead moves in his personal life that have led him to numerous arrests, it is the intelligence that he has exhibited while dealing with conflict and confrontation that have allowed him to succeed at a level greater than any of his contemporaries, seventeen years into his professional career.

At age 36, Mayweather, whose career record remains unblemished at 45-0 (26 knockouts), can no longer physically dominate and bully opponents the way he had several weight classes ago. But he doesn’t need to. More often than not, they’re already beaten by the time they reach the MGM Grand locker room to switch out sneakers for boxing shoes.

The five division world champion may never reach the status of being considered the greatest fighter to grace the ring, but it’s hard to argue that he isn’t already the greatest boxer outside of it.

Take for instance his 2011 opponent Victor Ortiz, who was 10 years Mayweather’s junior. At the kickoff press conference in New York, the aptly-monickered “Money” Mayweather treated Ortiz like an employee, stating that he himself would make great money while Ortiz would make “OK money.”

And indeed Ortiz was essentially an employee, minus the 1040 form. The event’s leading promoter was Mayweather Promotions and the boss was promised a reported $25 million guaranteed before pay-per-view and other incentives. Ortiz’s take was $2 million, a respectable career-high payday, but a paltry figure in comparison. Ortiz was making the most money he had to that date only because Mayweather was allowing him to.

There was almost no confidence present in Ortiz by the time he made it to the ring. And, after almost fouling himself out of the fight with an intentional headbutt in the fourth round, Mayweather punched him out for an easy fourth-round knockout.

Similarly, Mayweather showed his pull when Robert Guerrero tried to hold out for more money in their fight in May. Mayweather took to his Twitter account to inform the world that he would be facing then-welterweight titleholder Devon Alexander instead of Guerrero, stating that “The negotiations for my fight are almost done.” Guerrero signed shortly after for a reported $3 million, while Mayweather had a reported guarantee of $32 million.

Earlier this week, Mayweather was back to his mental warfare tactics, using his @FloydMayweather Twitter account to send out a comic meme to his 4,556,216 taunting Manny Pacquiao – the man considered his greatest rival – depicting the former eight-division world champion begging for a fight with Mayweather.

Then, in the wee hours of Christmas night, Mayweather released a painting of himself landing a jab on Pacquiao’s face with the accompanying message “Now you’re telling me I got to eat Juan Marquez’s leftovers? Let me talk to the IRS about this…”

Mayweather’s jabs at the Filipino congressman’s financial problems, which include a lien against his assets in America due to an $18 million debt, are ironic, considering that he himself had issues with the tax man that prompted his own ring return in 2009 from an almost two year absence.

Still, it makes Pacquiao look weak and desperate, at least that is what Mayweather is hoping. If and when a Pacquiao fight happens (and that remains a big if) it will likely be on Mayweather’s terms and no one else’s.

Gone are the days when Pacquiao had the leverage and means to hold out for parity; his back-to-back losses in 2012 to Timothy Bradley (by hotly disputed decision) and former Mayweather opponent Juan Manuel Marquez (by knockout) have hurt his marketability in a way that will be difficult to rehabilitate.

Pacquiao has since returned with an easy decision victory over former lightweight titleholder Brandon Rios in Macau, after which Pacquiao voiced interest in making the fight.

Talk of a Mayweather-Pacquiao fight is once again alive, and though it would still be the biggest fight that can be made today, it isn’t as big a fight as it could’ve been two years ago.

Mayweather’s offering to the British former junior welterweight champion showed Mayweather’s image fixed over Breidis Prescott’s from the scene of Khan’s first round knockout loss to him in 2008 with the message “Just imagine what Amir ‘Con Artist’ will get if his name gets picked in the Mayweather sweepstakes.”

Maidana, who finds himself in this position after upsetting Mayweather-clone Adrian Broner, was shown eating a right hand from Mayweather accompanied by the message “Can I please order a one-piece with a biscuit? No sides.”

Fights with Maidana and Khan, who are handled by Mayweather’s business partners Golden Boy Promotions, are decidedly much easier to make than a clash with Pacquiao, who is aligned with Mayweather’s former promoter Top Rank.

Ultimately the decision will come down to whomever is willing to acquiesce the most and play the role of mouse to the Pied Piper Mayweather. When Mayweather’s next opponent is announced, Floyd will begin his campaign of reminding them how he has stood across from a similarly-motivated and capable fighter 45 times, and 45 times had turned away their challenge.

And Mayweather will likely walk away from each pre-fight encounter smiling both inside and out about his antics, which have mentally crushed opponent after opponent before the final bell.

Ryan Songalia is a member of the Boxing Writers Association of America (BWAA) and is a contributor to The Ring magazine. He can be reached at [email protected]. An archive of his work can be found at www.ryansongalia.com. Follow him on Twitter: @RyanSongalia.