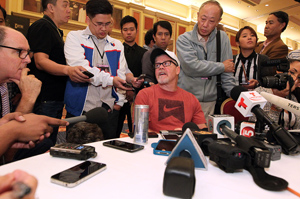 Trainer Freddie Roach offered a retort, of sorts, to an assault by RING No. 1-ranked pound-for-pound fighter Floyd Mayweather Jr., who has resorted to taunting his fighter, Manny Pacquiao, on the internet.

Mayweather's most recent taunt appeared on Christmas day on his Twitter account. In a photo, Mayweather is shown in a photo standing next to a man who appears to resemble both Pacquiao and the eight-division fighter'strainer, Freddie Roach. 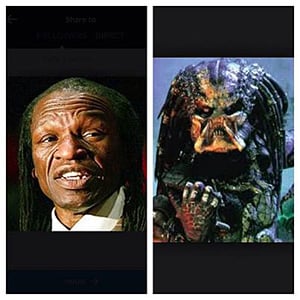 Roach responded with a volley of his own on his Twitter account, only Roach took a shot at Mayweather's father and trainer, Floyd Mayweather Sr.

Roach's account posts two photos — one of Mayweather Sr., and the other, of The Predator assassin from the movie by the same name.

Mayweatheris widely speculated to be on the verge of choosing England's Amir Khan for his May 3 return to the ring at either The MGM Grand in Las Vegas or The Barclays Center in Brooklyn, even as he has hinted that he could select Argentine Marcos "Chino" Maidana, who is coming off a unanimous decision that dethroned Adrien "The Problem"Broner as WBA 147-pound beltholder on Dec. 14.

Pacquiao was last in the ring for last month's welterweight unanimous decision over Brandon Rios that helped him to rebound from a sixth-round stoppage loss to Juan Manuel Marquez in December of last year.

Pacquiao has targeted a return of April 12 in The United States.