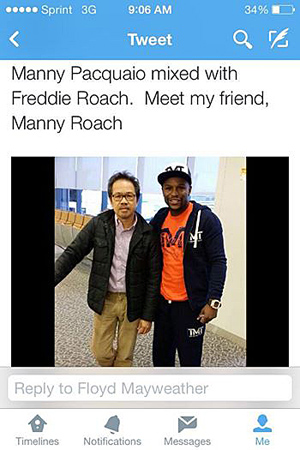 RING No. 1-ranked pound-for-pound fighter Floyd Mayweather Jr. continues to tease Manny Pacquiao on the internet, even as he is widely speculated to be on the verge of choosing England's Amir Khan for his May 3 return to the ring at either The MGM Grand in Las Vegas or The Barclays Center in Brooklyn,

Mayweather's most recent taunt appeared on Christmas day on his Twitter account. In a photo, Mayweather is shown in a photo standing next to a man who appears to resemble both Pacquiao and the eight-division fighter'strainer, Freddie Roach.

Pacquiao, who turned 35 on Dec. 17, was last in the ring for last month's welterweight unanimous decision over Brandon Rios that helped him to rebound from a sixth-round stoppage loss to Juan Manuel Marquez in December of last year.

In the wake of his loss to Rios, Pacquiao encountered some tax issues, which Mayweather lampoons in an artists' rendering which displays the Filipino star absorbing the full impact of a long, left hand from Mayweather.

"Now you're telling me I got to eat Juan Marquez's leftovers?" reads the caption beneath the drawing. "Let me talk to the IRS about this."

Mayweather also took shots at Khan and Argentine Marcos "Chino" Maidana, who is coming off a unanimous decision that dethroned Adrien "The Problem"Broner as WBA 147-pound beltholder on Dec. 14.

Although Khan has appeared to be the frontrunner to be named as Mayweather's next opponent, the fighter also indicated that he could select Maidana, each of whom is depicted being conquered by Mayweather.

"Just imagine what Amir 'Con Artist' will get," reads the caption for Khan', who is falling backward in a fight with Mayweather, "if his name gets picked in the Mayweather sweepstakes."

The face of Maidana, meanwhile, absorbs the impact of a Mayweather right hand.

"Can I please order a one-piece with a biscuit?" reads the Maidana caption. "No sides."

Mayweather's Christmas Card To The World on Monday began his attack on Pacquiao, comprised of a four-sequence rotation of photos.

In the montage, Mayweather refrences the offer he made to Pacquiao during a telephone conversation in January of 2012, mocks Pacquiao's loss to Marquez with a photo of the fighter lying face-down and unconcious, and depicts Pacquiao begging for Mayweather to fight him in May.

"This is my Christmas card to the world," reads the headline on the series. "Happy holidays. ZZZZZZZ."

The next photo shows the fallen Pacquiao lying face-down after the loss to Marquez.

Pacquiao has targeted a return of April 12 in The United States.