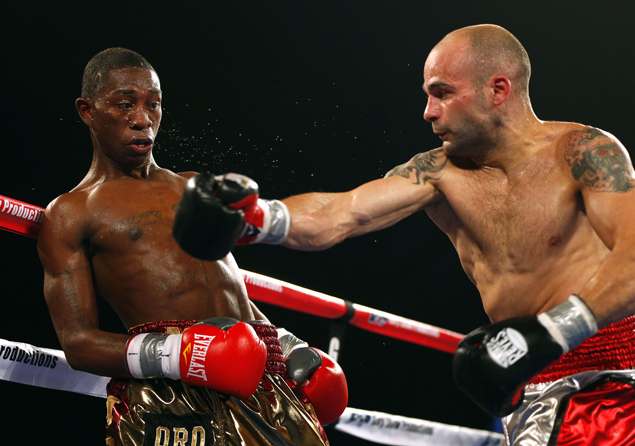 Kiko Martinez (right) presses Jhonathan Romero to the ropes in the second round of their IBF junior featherweight title bout on Aug. 17 in Atlantic City, New Jersey. Martinez stopped the defending beltholder in the sixth round.

Kiko Martinez will be in an unusual position on Saturday night. Typically, a significant fight means another stamp in the passport for the 27-year-old veteran from Alicante, Spain, who has fought in eight different countries during his nine year career.

But after winning the IBF junior featherweight title in August with a sixth-round knockout of previously unbeaten Jhonatan Romero, Martinez (29-4, 21 knockouts) finds himself in the driver’s seat with a major bargaining chip for big matchups.

First, Martinez must get by mandatory challenger Jeffrey Mathebula (27-4-2, 14 KOs) at Pabellon Esperanza Lag in Elche, Spain. Mathebula is a rugged South African who previously wore the belt that Martinez now carries.

Martinez, who is promoted by RING middleweight champion Sergio Martinez’s company MaravillaBox and advised by Sampson Lewkowicz of Sampson Boxing, spoke to RingTV.com about his fight. Martinez was translated by Fernando Gaztambide. 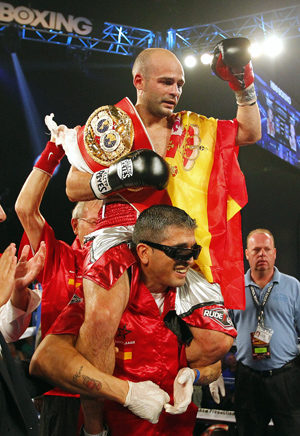 RingTV.com: You’ve been a champion now for four months. How has it felt to finally get a world title around your waist after so many highs and lows in your career?

Martinez: I’m very happy for that, but there is no luck involved. Everything was done by my good performance in the ring and my team’s hard work outside the ring.

RTV: Your opponent Mathebula is a tall, lanky fighter who most recently beat Takalani Ndlovu, a man whom you’ve fought before. What do you know about Mathebula, and what kind of challenge do you anticipate from him?

Martinez: Yes, I fought Takalani in South Africa in conditions that cannot be repeated. I’m not the same boxer as that I was a couple of months ago. This new team changed my mentality. Mathebula has no option, even when he is the mandatory challenger. Mathebula came to Spain to lose by way of knockout and that’s what I’m going to do.

RTV: The junior featherweight division has a lot of talent, including yourself, Guillermo Rigondeaux and Leo Santa Cruz. Where do you see yourself ranked in the division, and whom among that pool would you like to fight next?

Martinez: I only look at Mathebula. When he gets knocked out my team will say who I’m fighting next. That’s their choice. I own inside the ring and Sergio Martinez owns below the ring. I will fight whomever Sergio says, with no opinion on my part. My career is in good hands.

Martinez: It has been nine weeks. As always, I’m 100 percent ready with my trainer Pablo Sarmiento. It was a hard and professional training camp. Nothing can go wrong at this level.

RTV: You’ve traditionally had all of your biggest fights take place in your opponent’s home countries. How does it feel to finally be able to make a hometown defense?

Martinez: This is a great opportunity given by MaravillaBox and Sampson Boxing. It’s an award. It will be a great party for us that will end up with a victory. We will have a beautiful Christmas and I will talk to Sergio in January so he can tell me what’s next.