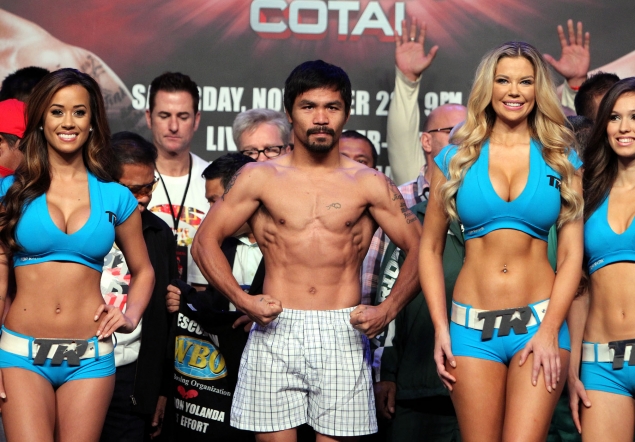 The the United States Court of Appeal for the Fifth Circuit in New Orleans on Wednesday dismissed a $1 million lawsuit against Manny Pacquiao, re-affirming a ruling in an earlier case in Texas in March that Pacquiao’s opponent in the lawsuit, Imperial ED Promotions, had committed “egregious litigation misconduct” and perpetrated a fraud by doctoring a document, according to a release obtained by RingTV.com.

“As Manny’s popularity increased, he has become a target,” said Pacquiao’s attorney, David Marroso, a partner at the Los Angeles law firm O’Melveny & Myers. “People file meritless lawsuits against Manny hoping cash in on his success.”

In March of this year, Pacquiao won a court case when a federal judge in Texas dismissed Imperial ED Promotions’ suit. In that instance, judge Ricardo Hinojosa, the Chief Judge of the federal court in Southern Texas, threw out the suit that was filed against Pacquiao in November of 2010 claiming that the fighter failed to appear at a September promotional event in McAllen, Texas.

Imperial ED charged that Pacquiao was to meet fans and sign autographs at an event two months prior to the Filipino star’s unanimous decision victory over Antonio Margarito at Cowboys Stadium in Arlington, Texas, on Nov. 13. Pacquiao’s advisor, Michael Koncz, said that Pacquiao was not paid the money he was owed.

Click here for the link to the court documents.

Marroso had questioned whether the right plaintiff had brought the case, contending that Pacquiao had signed a contract with a man named Edmundo Lozano, but that Imperial ED Promotions, which is managed by Lozano, had filed the lawsuit. In response to Pacquiao’s motion, Imperial Ed produced a document in July of last year which it claimed was a justification of its right to sue.

But Pacquiao’s attorneys questioned the validity of the document and requested an opportunity for an ink-dating expert to test the paper to determine whether it had been fabricated and backdated.

At the time, Pacquiao said he hoped the decision would discourage “unscrupulous plaintiffs” seeking to “cash in” on Pacquiao, according toi Marroso.

“This is the same case that was decided earlier in the year at a lower court. Imperial Ed, they appealed this case all the way up to the United States Court of Appeals. This hearing was in New Orleans, and the arguments were before a panel of three judges. They basically pleaded with these judges to reverse the lower court’s decision,” said Marroso.

“They swore up and down that the document was real. They swore up and down that they had it in their files. They said that Pacquiao was mistaken, and that the lower court was mistaken, and that it was unfair to deprive them of the opportunity to try this case. The panel of judges listened to them, looked at the evidence and said, ‘Absolutely not. The document’s a phony,’ and the judge did admirable work and affirmed the judgement, meaning that this case if over.”

Koncz said “Manny took a stand in this case and vowed to fight until his name was cleared,” of Pacquiao, who is coming off a victory over Brandon Rios on Nov. 23,

“This is just a case that we felt was frivolous from the get-go,” said Koncz. “We tried to have it resolved without going to court…They felt that they were going to take advantage of Manny’s starpower.”

In a separate issue, Pacquiao has denied owing $18.5 million, contending that the disclosure of his personal tax information was the work of “people out to destroy me.” The celebrity gossip website TMZ originally posted the numbers pertaining to Pacquiao, citing “official documents” that were never posted on its site pertaining to unpaid taxes from 2006 through 2010.

Pacquiao’s attorney in that case, Steven Toscher, who is working with Marroso, has said that Pacquiao’s “financial advisors are handling the situation,” while also claiming “serious errors” in the reports that the fighter owes the $18.5 million in unpaid taxes to the U.S. Internal Revenue Service.

Also, last month, it was reported that Pacquiao had to borrow money in order to keep his promise to support typhoon victims in the Philippines because his nation’s tax authorities had frozen his bank accounts.

In that situation, Pacquiao, coming off a victory over Brandon Rios on Nov. 23, is said to have not proven that he has paid taxes in 2008-2009, according to the Bureau of Internal Revenue. The bureau contended that the fighter owed $50 million in back taxes as of July, according to the Associated Press.

According to the Bureau of Internal Revenue, Pacquiao had not provided “certified” documents showing he had paid taxes in the U.S. for 2008-2009.

Pacquiao says he did pay U.S. taxes those years and that his promoter, Top Rank, submitted evidence of the amounts withheld from his purses and made payments directly to the U.S. taxing authorities.  Pacquiao said he has asked the IRS to provide the requested “certified” documents immediately.