WBC heavyweight champion Vitali Klitschko, a 42-year-old veteran who announced his presidential candidacy in Ukraine in October, has vacated his title and been named “Champion Emeritus” by the organization, which will soon determine the top two fighters to participate in an eliminator bout that will yield the successor to the belt that belonged to Klitschko.

“I want to thank the WBC and its president Don Jose Sulaiman for the support in our fight for democracy and freedom in the Ukraine. It was and is a great honor to hold the WBC title and I’ve always done it with pride,” said Klitschko, whose 37-year-old brother, Wladimir Klitschko, is THE RING, IBF, WBA and WBO champion.

“The offer of the WBC gives me the theoretical possibility to return to the boxing ring, which I cannot imagine at all to the current state. Right now, my full concentration is on politics in Ukraine, and I feel that the people need me there. My brother Wladimir will ensure more sporting success and I will — as always — support him as much as he currently supports me in my political fight.”

The WBC’s next highest-ranked heavyweights, are, in order, from 1-to-3, mandatory challenger Bermane Stiverne, Chris Arreola, and Deontay “The Bronze Bomber” Wilder, according to WBC Secretary General Mauricio Sulaiman. The next three are, in order, from 4-to-6, Bryant Jennings, Mike Perez and Dereck Chisora. 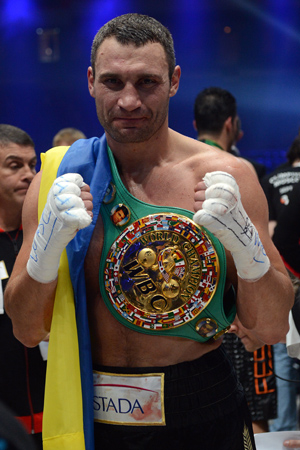 “The WBC is proud and honored to confirm the status of Vitali Klitschko as WBC Heavyweight World Champion Emeritus. Undoubtedly, Vitali has earned that distinction through his actions inside and outside the ring,” read a statement from Mauricio Sulaiman, in part.

“Vitali Klitschko is fighting the fight of his life; this time outside the ring. Vitali is showing to the world what is the true heart of a champion by leading his countrymen to battle in the streets in their search of human equality, rights and peace for the great country of the Ukraine.”

Klitschko (45-2, 41 knockouts) has not been in the ring since last September when he made the 10th defense of his belt with a fourth-round stoppage of previously unbeaten Manuel Charr.

Klitschko had asked for Nov. 30 to make his decision, but was given until Dec. 15 to announce it, according to Sulaiman, of a situation that was determined at the Nov. 3-through-9 WBC convention.

“Vitali Klitschko announced his candidacy for the Presidency of the Ukraine, which election will take place in 2015. Vitali believed he would be able to defend his WBC Heavyweight World Championship, and wanted to do so against the WBC mandatory contender Bermane Stiverne,” read the statement.

“Vitali attended the WBC 51st annual convention in Bangkok last November. At the convention, the representatives of the 165 countries affiliated to the WBC issued a special proclamation applauding and joining his efforts to represent boxing and the WBC in his candidacy for the presidency of the Ukraine.”

Earlier this month, Klitschko defused a potentially violent demonstration between anti-government protesters and police on Sunday in Kiev. A video on YouTube.com shows the 6-foot-7 Klitschko, who is an opposition leader, using a bullhorn to quiet outraged crowd members who are demanding the resignation of president Viktor Yanukovich.

“With the current extreme and delicate political situation in the Ukraine, Vitali has answered his country’s call to fight for human rights and equality. Accordingly, Vitali will not be able to provide the WBC with a predictable time-frame to return to the ring,” read the statement.

“In light of those considerations, the WBC Supreme Council and the WBC Board of Governors have voted unanimously to name Vitali Klitschko WBC Heavyweight Champion Emeritus. Very few great fighters have received such an honorable distinction, which will entitle Vitali to fight for the WBC Heavyweight World Championship when he is ready to return to the ring.”

In other words, under his new distinction, Klitschko will, in essence, retire with the option of being able to return to the ring at any time and be eligible to fight for the title against the reigning beltholder.

Klitschko held the “Champion Emeritus” status when he was out of the ring from 2005 to October of 2008, when ended his semi-retirement and challenged then-WBC titleholder Samuel Peter, who he stopped in eight rounds.

The top contenders for the vacated WBC belt have been busy during the 13 months that Klitschko has been inactive.

In his last fight in April, which was designated as a WBC elimination bout for the right to face Klitschko, Stiverne (21-1, 20 KOs) scored a third-round knockdown on the way to a unanimous decision over Arreola (35-3, 30 KOs), whom Klitschko stopped in September of 2009.

In his last fight in September, Arreola stopped Seth Mitchell in the first round.

The 6-foot-7 Wilder (30-0, 30 KOs) is coming off October’s fourth-round stoppage Nicolai Firtha, whom he dropped three times. Wilder is a 28-year-old 2008 Olympic bronze medalist from Tuscaloosa, Ala.

Jennings (17-0, 9 KOs) is coming off a sixth-round stoppage victory over Andrey Fedosov and is expected to return to the ring against Arthur Szpillka (16-0, 12 KOs) )on Jan. 25.

Perez (20-0, 12 KOs) is coming off a brutal 10-round unanimous decision victory on Nov. 2 that left Magomed “Mago” Abdusalamov in a medically induced coma until last week, and will return to the ring on Jan. 18 against Carlos Takam (28-1, 22 KOs) on the undercard of a main event featuring former IBF super middleweight titleholder Lucian Bute against light heavyweight ex-beltholder Jean Pascal at Bell Centre in Montreal.

Perez will be donating a portion of his purse to Abdusalamov’s family and will honor him in the ring by having “Mago’s” name stitched on his trunks. Fans can also make donations to Abdusalamov and his family through www.Ring10Ny.com.

Chisora (19-4, 13 KOs) is coming off last month’s third-round knockout of Ondrej Pala, representing his fourth consecutive stoppage win, since, himself, being knocked out by ex-beltholder David Haye in fifth round in July of 2012. Chisora is slated to be back in action on Feb. 15.