Adrien Broner still defiant in defeat: ‘I will be back’ 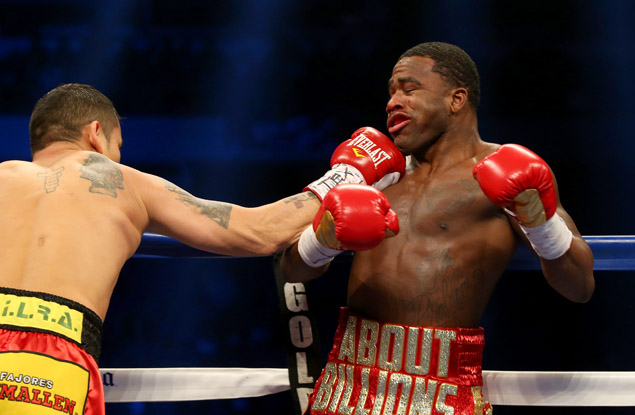 SAN ANTONIO — Having been floored twice, his nose bloodied and dethroned as WBA welterweight beltholder by Marcos Maidana following a unanimous decision at The Alamodome, a dejected Adrien “The Problem” Broner left the ring without being interviewed by Showtime.

Later, however, Broner (27-1, 22 knockouts) did sit down with Showtime’s Barry Tompkins in the locker room to address the loss to Maidana (35-3, 31 KOs), and below is what he said.

On how he the loss affected him:

“I will never put myself above nobody, but I’m still young, fly and flashy and I’m rich, and I’m still in the game of boxing, so what’s happening?”


On the eighth-round intentional head butt by Maidana, who was penalized:

On the mark of a champion being the ability to rebound from a loss:

“I’m not going to agree with that. You don’t have to lose nothing to find out how good you are. So, all I can do is go back to the drawing board, and do what I do best, and that’s to come back and train my ass off. I want to thank everybody who watched the fight or came to the fight, and I will be back.”

On the early affect of the second-round knockdown:

On his general accomplishments:

“I’m still a champion in three different weight classes. Tonight, Maidana was just the better man. But we fought a helluva fight, and I hope that the fans got what they deserved. We’re still going to live like we won the fight.”