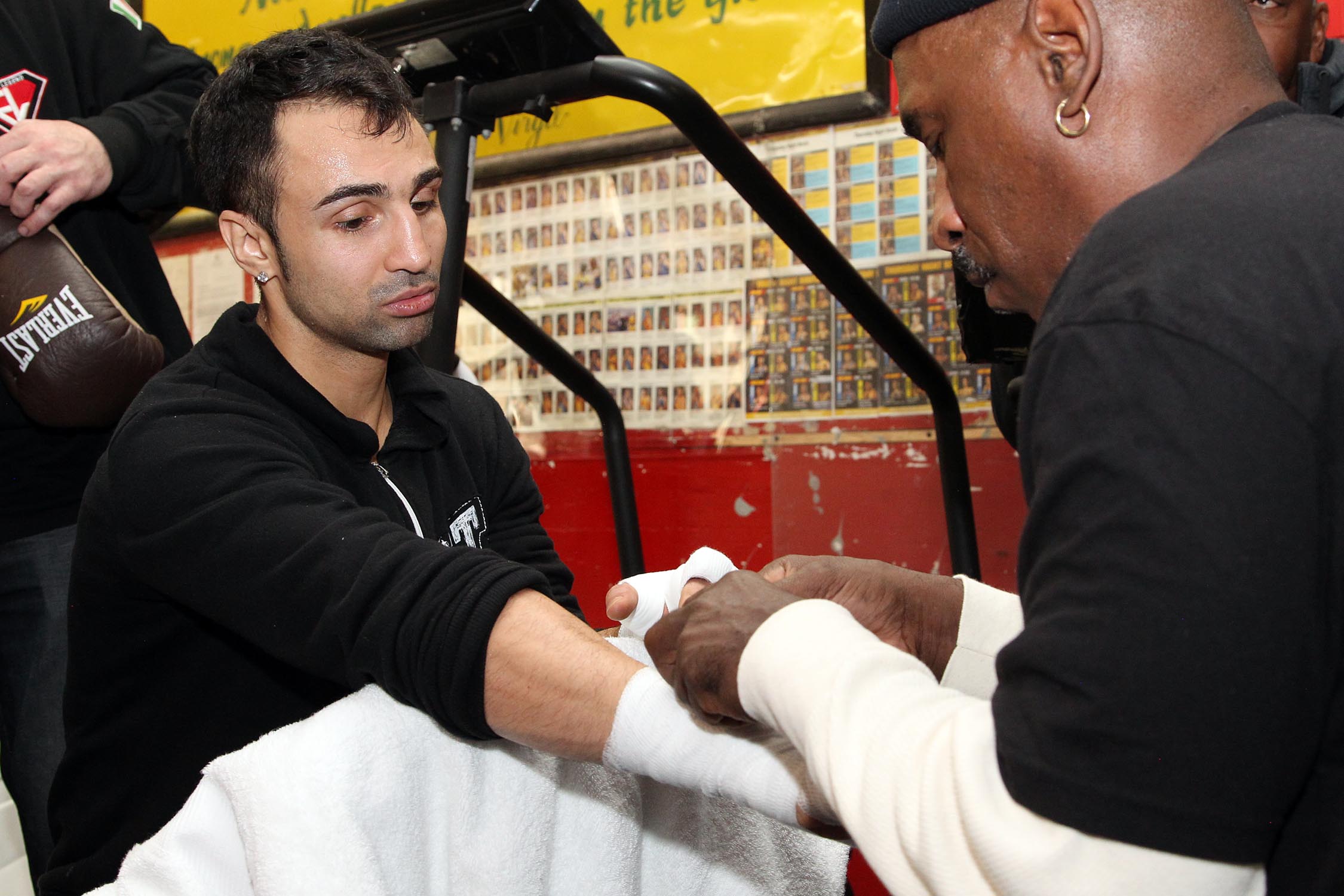 BROOKLYN, N.Y. — Tuesday was a busy day at Gleason’s Gym on Front Street, where several of the fighters who will be featured in Saturday’s Showtime-televised bouts at Barclays Center held open workouts.

Malignaggi is trying to rebound from June’s split-decision WBA welterweight title loss to Adrien Broner, while Judah, who turned 36 in October, rose from an eighth-round knockdown against Danny Garcia this past April prior to losing a close unanimous decision to RING, WBA and WBC 140-pound champion at Barclays Center.

Although there is unyielding respect between the two aging fighters, Malignaggi said that will end when the bell rings.

“I expect the best Zab Judah. I expect a Zab Judah who is going to be fighting for his boxing career. I feel the same way. If we saw each other in the gym, we would try to knock each other out. There’s no love taps. With this much on the line you can bet we’re both going to have it out on Saturday. You have to be stubborn to have longevity. One or two losses can quickly demote you to a second level fighter,” said Malignaggi.

“But you have to have the stubbornness to keep going. There’s a lot of emotion, but at the end of the day, we gotta do what we gotta do to win. We’re both motivated to win, but when you’re at this level anything can get you motivated for a fight like this. If you’re not motivated for this, you better check your pulse to make sure you’re alive.”

“I want that Broner verus Maidana winner, but first things first,” said Malignaggi. “I have to get through Saturday night. A win over Zab Judah is what I want for Christmas. That suffices.”

In his last fight in May, Alexander scored a seventh-round stoppage of Lee Purdy that represented his fourth straight victory since falling to current WBO 147-pound beltholder Tim Bradley by 10th-round technical decision in January of 2011.

That run has included a split decision over Lucas Matthysse, as well as a unanimous decision over Maidana in his welterweight debut.

In returning to Barclays, Alexander will be back at the site of his win over Bailey.

“I feel good fighting here in Brooklyn. It is my second time and it definitely feels like home. They’re definitely bringing boxing back to Brooklyn. I’ve been in camp all this time,” said Alexander.

“I’m back to normal and Saturday night you’ll see it. You can expect me to win and be explosive. I’m going to be smart and get the win. I know Shawn is hungry. I was in that position and now I’m in this position.”

Alexander and Porter met once before as amateurs, and the fact that Alexander soundly defeated Porter has become a source of ire and motivation for the challenger and his father and trainer, Kenny Porter.

“We worked extremely hard this camp working on the mental and physical aspects of this fight. We pushed hard to beat the champ. We worked my heart out. We did 18 rounds in the gym,” said Porter.

“We’re going to mix it up. I’ve seen a few of his fights. He’s going to scrap. He’s been booed but he won’t be booed on Saturday night. He’ll come ready.”

For their clash of southpaws, Trout and Lara have engaged in a bitter war of words.

“I feel like he lacks some heart and will, and I’m going to go in and expose that,” said Trout, during an earlier interview. “I am going to make [Lara] look like the amateur that he is. I want to get rid of this guy, and I feel like I’m the right guy to do it. Whether I like him or don’t like him, which I don’t, it doesn’t change the fact that I’m going to try to take his head off.”

At Gleason’s on Tuesday, Lara responded.

“Trout talks too much. He’s all talk and no show. I’m a solid fighter with skills and I’m at the top of my division,” said Lara. “On Saturday night it will be the better boxer, better puncher and more intelligent fighter. On Saturday night we are going to see who has the bigger heart and bigger balls.”

In his last fight in June at Barclays, Bika majority decisioned Mexico’s previously unbeaten Marco Antonio Periban for his current belt on the undercard of Broner-Malignaggi. Bika-Periban was for the WBC belt formerly held by RING and WBA champion Andre Ward.

Bika lost to Ward by decision in November of 2010, and also suffered earlier title-bout losses against Lucian Bute and Joe Calzaghe. The win over Periban represented Bika’s fourth straight win during a run that includes two knockouts.

“I’m looking to maintaining my record and win this fight. I feel good, and I want to show the people at Barclays Center that I am one of the best,” said Bika, 34, who worked with Alexander’s trainer, Kevin Cunningham in St. Louis, Mo. “I want Barclays Center to become my second home. I feel happy to be back in New York. It’s going to be a good night for St. Louis. Everything we did there was good.”

Dirrell, 29, is the younger brother of fellow super middleweight contender Andre Dirrell, and is coming off a third-round stoppage of Anthony Hanshaw in July.

In May of last year, Dirrell suffered a broken leg during a motorcycle accident, marking his second career setback. Dirrell was diagnosed with non-Hodgkin’s lymphoma shortly after he stopped James Hopkins in December 2006 and didn’t return to the ring until October 2008, when he decisioned Andy Mavros over four rounds.

“It feels great to fight at Barclays Center. It feels good to be on a big card. I’m experienced too,” said Dirrell, who is motivated to win a title after having survived cancer.

“I’ve been doing it 20 years. I just know I’m an athlete I can do it all. That’s my plan, do what I want to do. I’m going to go in and do what I need to do to win. This is one of the hardest training camps I’ve had and I’m ready.”

In his last fight in September at Barclays, Ali rose from a first-round knockdown and then floored rival Jay Krupp in both the third and final stanzas of an eight-round unanimous decision victory.

“My last fight was here and I want to keep boxing in Brooklyn alive,” said Ali. “I want to become a Barclays Center staple. It’s always exciting to fight there.”

Browne was also at Barclays on the Ali-Krupp card, going the distance for the first time in eight-round unanimous decision over Lamont Williams.

“I’m ready to show my growth from the last fight and put on a show. I like to have fun and make it look easy. I’m not trying to go eight rounds,” said Browne.

“I want to end my year on a good note and progress into 2014. My training was great. I was on weight a month and a half ago because I never got out of the gym.”