Lem’s latest: Maidana says Broner is not ‘a slick boxer’ 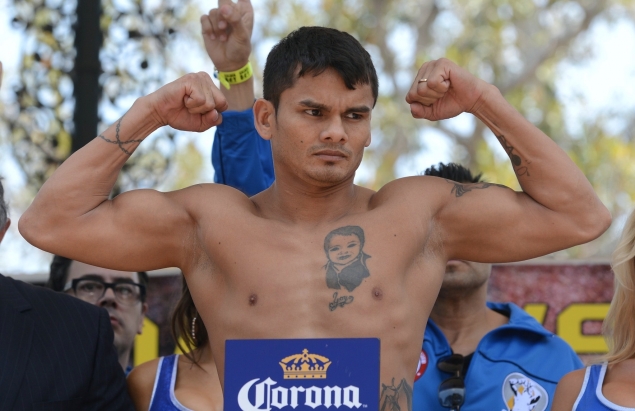 During a Tuesday conference call in advance of his Dec. 14 clash with WBA welterweight beltholder Adrien “The Problem” Broner, Marcos Maidana Maidana acknowledged his past problems with skillful boxer-punchers.

But Maidana (34-3, 31 knockouts) does not believe that Broner is the best fighter he has faced and he contends that he will represent Broner’s most difficult challenge to date.

“Maybe you’re right. I’ve had a few problems with boxers that are slick boxers,” said Maidana, a 30-year-old Argentine power-puncher who is in pursuit of his fourth straight stoppage victory against Broner (27-0, 22 KOs).

“But I don’t think that Broner is a slick boxer. He’s talented, but I am preparing well, and I’ve had great sparring partners this time. I’ve adjusted myself. I’m sure that Adrien will respect me in the ring. I will make sure that he respects me in the ring.”

Among those who have troubled Maidana are fast and mobile boxers IBF beltholder Devon Alexander and Amir Khan and technicians, such as Andriy Kotelnik, who have beaten him. Experienced ex-beltholders Erik Morales and DeMarcus Corley also hindered Maidana before losing decisions.

Maidana was dropped three times while scoring two knockdowns during a sixth-round knockout win over future 147-pound beltholder Victor Ortiz in June of 2009. Still, he contends that his past experiences in those fights will help him against Broner.

Maidana last suffered defeat in February of 2012 to Alexander, losing by unanimous decision in his 147-pound debut. Since then, however, Maidana has aligned with trainer Robert Garcia, under whom he has won three consecutive bouts by stoppage, including those over Jesus Soto Karass and Josesito Lopez.

A 24-year-old talent who is coming off a split-decision that dethroned Paulie Malignaggi in his 147-pound debut in June.

Maidana not only asserts that he will be the harder puncher but also the more stable of the two fighters given their relative experience at 147-pounds.

“I would say that he is now an established welteweight. Physically, he’s there now, no doubt about it,” said Maidana. “The only problem is that he has not been tested by a natural welterweight like me. That’s why this is the hardest fight of his life.”

ROY JONES JR. RETURNS TO THE RING ON DEC. 21

Square Ring Promotions and Hrunov Promotions announced on Tuesday that Roy Jones Jr. (56-9, 40 KOs) will return in the ring on Dec. 21 in Moscow, Russia in a 12 round cruiserweight fight against Frenchman Zine Eddine Benmakhlouf (17-3-1, 8 KOs).

Jones, who turns 45 in January, has won two straight being stopped in his third straight loss by Denis Lebedev in the 10th round in May of 2011.

Jones’ past two triumphs were by unanimous and split-decision over Max Alexander and Pawel Glazewski in December of 2011 and June of 2012, respectively.

Benmakhlouf, 36, has not fought since March of 2012, when he stopped Peter Hegyes in the fifth round.

RING heavyweight champion Wladimir Klitschko, holder of the IBF, WBA and WBO belts, will discover on Wednesday whether  Alex Leapai will be his WBO mandatory opponent, or if Leepai must first face Dereck Chisora for the right to meet Klitschko.

“Tomorrow we will announce the Wladimir Klitschko mandatory,” said WBO president Paco Valcarcel. “We’ll have a mandatory or an elimination bout.”

A winner by scores of 96-92 on the cards of Gerhard Sigl and Matteo Montella, and 98-92 on that of Zolton Enyedi, Leapai entered the bout having scored four straight knockout victories since being stopped in the ninth round by Kevin Johnson in April of 2012.

Chisora (19-4, 13 KOs) is coming off last month’s third-round knockout of Ondrej Pala, representing his fourth consecutive stoppage win, since, himself, being knocked out by ex-beltholder David Haye in fifth round in July of 2012.

Chisora’s loss to Haye was his third straight, following those by split-decision and unanimous decision to Robert Helenius and Vitali Klitschko in December of 2011 and February of 2012, respectively. Chisora’s other loss was by unanimous decison to Tyson Fury in July of 2011.

Klitschko (61-3, 51 KOs) was last in the ring for his 19th straight victory during a run that includes 13 knockouts, having unanimously decisioned previously unbeaten Alexander Povetkin in October.

“Leepai beat Boytsov, who was the No. 1 contender. Then, the ratings committee decided to classify him as No. 1 among the heavyweights. Today, the committee was voting on that request, and whether or not to make an elimination bout. If we make an elimination bout, it will be against Chisora. After Leepai, he’s the best, most qualified heavyweight. They voted today, and they will make their announcement of their decision tomorrow.”

In accordance with an earlier report by RingTV.com, Valcarcel has declared that the purse bids for the third bout between WBO super middleweight Robert Stieglitz (46-3, 26 KOs) and Arthur Abraham ((38-4, 28 KOs) and for a defense by British lightweight titleholder Ricky Burns (36-2-1, 11 KOs) and Terence Crawford (22-0, 16 KOs) will be held on Sunday in Budapest, Hungary, and, Monday, in San Juan, Puerto Rico, respectively.

Stieglitz and Abraham have split bouts.

Stieglitz was dethroned by Abraham following a unanimous decision in August of 2012 but gained he revenge following a fourth-round stoppage victory in March. Since falling to Stieglitz, Abraham has won two straight fights, as has Stieglitz since facing Abraham.

Burns has undergone surgery to repair the broken jaw he sustained during September’s controversial draw against Raymundo Beltran, who dropped Burns in the eighth round.

Burns is 21-0-1, with eight knockouts since falling by unanimous decison to Carl Johanneson in February of 2007.

In his last fight in June of 2011, Ouma was knocked out in the 10th round by Gennady Golovkin.