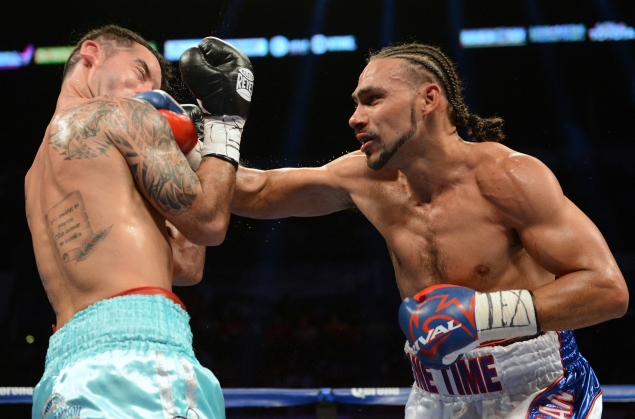 By the time Keith Thurman was born, the fighters whose skills and accomplishments he most aspires to were nearing the end of their careers.

“That’s what Keith Thurman’s about,” said Thurman during an earlier interview with RingTV.com. “Evander Holyfield and guys like that paved the way for me to do what I do.”

Thurman will be back in action against rugged Jesus Soto Karass (28-8-3, 18 KOs) on the Dec. 14 undercard of the Adrien Broner-Marcos Maidana WBA welterweight title bout at the Alamodome in San Antonio.

“Growing up in the world of boxing, surprisingly, I was not much of a boxing fan. It was only once I started to do my research and my history into the sport of boxing that I fell in love with all of the old school fighters. I mean, practically all of them,” said Thurman.

“It’s the way that they fought and it’s the way that they handled themselves, and the fact that they would mix it up with anybody. All that you had to do is to walk up to them on street and say, ‘Yo, I’m gonna knock you out’ and they’re saying ‘Where’s the contract? Let’s put one together right now.’ “

Thurman’s mentality, if not, his versatility has been on display over the course of his past three victories, stopping former titleholder Carlos Quintana in the fourth round in November of 2012, routing ex-beltholder Jan Zaveck over 12 rounds in March, and scoring a ninth-round TKO of previously unbeaten Diego Chaves in July to end the loser’s streak of five consecutive stoppage wins.

Thurman has, in the past, called out elite welterweights Floyd Mayweather Jr., Tim Bradley, and Devon Alexander.

“That’s sort of the mentality that had me calling out Floyd Mayweather in my first appearance on a big network. You know, here I am, and I’m the young dude coming up in the ring, and I’m letting the whole world know who my actual target is,” said Thurman of Clearwater, Fla., who failed to register his ninth-straight knockout victory against Zaveck, though he won by shutout scores of 120-108 on all three judges’ cards.

“You can doubt me as much as you want, but you are going to watch me throughout my career climb that ladder and reach the destination that I foresaw, and the one that I told you about, and that’s Floyd ‘Money’ Mayweather. Jesus Soto Karass is just one of those steppingstones that I have to get by if I want to make that dream come true.”

Thurman has made a believer out of Golden Boy CEO Richard Schaefer.

“I don’t blame him, he’s the kind of fighter who really means it,” said Schaefer of Thurman’s early soliciting of Mayweather. “He’s the sort of fighter who will fight anyone, anywhere at any time, and usually, when he hits someone, that’s why he’s named ‘One Time,’ because it’s the only time that he needs and he can knock them out. That’s how exciting this guy is. This is ‘Must See T.V.'”

So will Soto Karass, who rose from an 11th-round knockdown to drop and stop former two-time welterweight beltholder Andre Berto in the 12th round of the main event of the card that Thurman-Chavez was on.

The victory over Berto was the second straight for Soto Karass following an eighth-round stoppage loss to Maidana in September of 2012.

Prior to facing Berto, Soto Karass had earned a majority decision over Selcuk Aydin in January that helped him to rebound from an eighth-round stoppage loss to Maidana in September of 2012.

“I can go toe-to-toe, but lately, I’ve been boxing a little bit more. I’ve been a little smarter and a little more intelligent. I’ve been working on that in the ring. But as always, if it comes down to it, I have the balls to go toe-to-toe if I need to,” said Soto Karass.

“Then, obviously, it’s going to favor me, and I’m accustomed to that style. I’m going to do what it takes to win. But, you know, still, obviously, there’s a little bit of skill involved and a game plan to be smart, and that’s always going to be in the back of my mind.”

If a brawl materializes with Soto Karass, Thurman knows that sometimes comes with the territory.