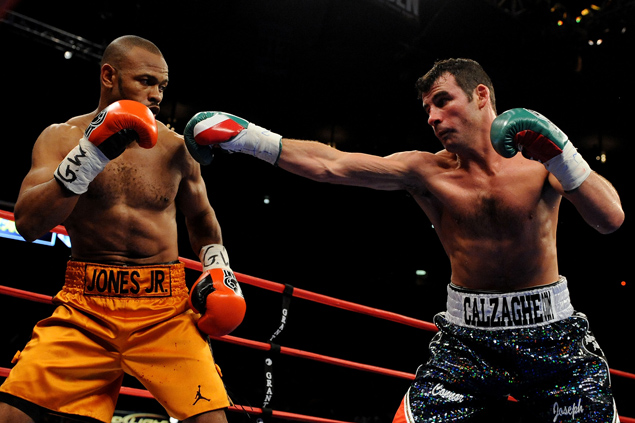 Joe Calzaghe (right) punches at Roy Jones Jr. (left) during their RING magazine light heavyweight championship bout at Madison Square Garden Nov. 8, 2008 in New York City. Calzaghe, who along with Jones is one of the two best super middleweights ever, gave his thoughts on Saturday’s 168-pound showdown between fellow Brits Carl Froch and George Groves.

As Carl Froch prepares to defend his IBF super middleweight title against George Groves on Saturday in Manchester, England, opinions are many and varied on the outcome, but one man who can offer a unique and authentic insight is history’s most successful 168 pounder, Joe Calzaghe.

The Welshman dominated an era of super middleweights, between 1997 and 2007, becoming the most decorated champion the division has ever produced. He annexed WBA, WBC, WBO, IBF and THE RING titles, before closing out with a pair of light heavyweight triumphs over American icons, Bernard Hopkins and Roy Jones Jr.

Calzaghe, like this weekend’s participants, is also British but that is not the only thing that he shares with champion and challenger. Six years ago the pound-for-pounder was putting the finishing touches on his illustrious career when a new force, unquestionably skilled but effectively untested, vowed to knock him off his perch – Nottingham’s Froch.

“Yeah, there was talk that I avoided Carl,” said Calzaghe. “The fight was offered to me around 2007, but the reason I wasn’t interested is because a Froch fight didn’t mean a thing back then. He was a contender at that time, but unproven on the world scene and I only wanted the best.

“After I beat Lacy, I wanted Kessler and then my goal was to go after Hopkins, who is still a world champion to this day. It makes me laugh a little because Froch is pissed that Groves has called him out, when he did exactly the same thing with me. 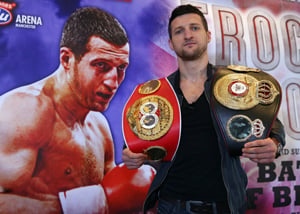 Despite the unsettled fistic rivalry and championship ego there is in fact real respect between Calzaghe and Froch and the former champion gave an appreciative, if noticeably measured, appraisal of the Nottingham man’s attributes.

“Carl Froch is a good champion,” said Calzaghe. “He punches hard, takes a great shot and with each fight he collects more and more experience. We can’t say he’s the best super middleweight in the world, because that title goes to Andre Ward, but there is still no doubting Carl’s credibility.

“We’ve seen him avenge defeat (to Mikkel Kessler) and come through some really hard fights to prove himself a true champion.”

The Welshman can also relate to the challenger. Calzaghe fought for his first world title at precisely the same age, 25 years old, and there are other eerily similar statistics, which might be eye opening for those who think the Froch fight has come too soon for Groves.

Calzaghe was a professional for four years, unbeaten in 22 fights and a former British champion, when he contested for the vacant WBO super middleweight title. Those numbers are very comparable with Groves, who is a former British and Commonwealth champion, a paid athlete for five years, and undefeated in 19 bouts.

“The Pride of Wales” also took on an established British legend in Chris Eubank, just as Groves faces off against Froch, whose prominence and star status has exploded the UK. 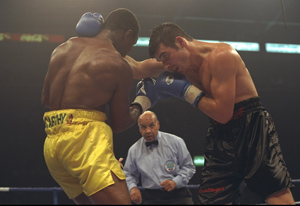 “I felt I was ready to win a world title 12 months before I achieved it,” said Calzaghe. “But look what I went on to achieve compared to most of them. Not being big headed but I was an unbeaten two-weight world champion, which happens once in a lifetime.

“When I fought Eubank he was considered a boxing legend over here and had made his name fighting Nigel Benn, Michael Watson and Steve Collins. It was surreal facing Chris, because I was a huge fan of his and he ended up giving me the hardest fight of my life.”

There is no denying that Calzaghe and Froch have been there and done in at super middleweight. Calzaghe crashed the pound for pound rankings after unifying against Jeff Lacy and Mikkel Kessler, whereas “The Cobra” has injected poison into every top level 168 pounder, with the exception of Andre Ward.

Still, the Groves bout represents the first time that Froch will defend a world title against a home fighter, on home soil, whereas Calzaghe retained his crown against British neighbors in Robin Reid, Richie Woodhall and David Starie.

“I frequently underperformed against home fighters,” said Calzaghe. “My defense against Starie was a stinking fight and it’s difficult to explain. No offence to the British guys, but my best opponents were mainly Americans: Charles Brewer, Byron Mitchell, Jeff Lacy, Bernard Hopkins and Roy Jones.

“I always raised my game against them, but it was different in a domestic fight. I was always in great shape physically, but maybe it’s a mental thing, where you feel more threatened by certain opponents and it brings out the best in you, like my fight with Mikkel Kessler.

“Froch has also been in massive fights against Kessler and Andre Ward, so can he really be 100 percent focused against an up and coming British fighter like Groves? It’s only human to underestimate a lower level of competition, when you’ve been at the top. 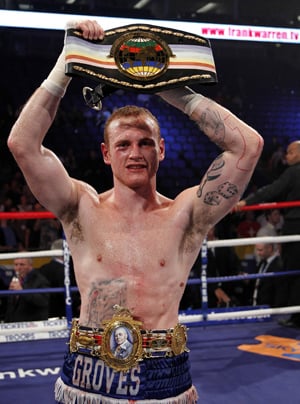 “On the other hand Groves will be so up for this fight. He’ll be in great shape because this is his opportunity to shine and that reminds me of my fight with Eubank. This is Groves’ first step towards setting himself up for life and he’ll be beyond hungry.”

So, despite being able to offer a fascinating insight and identify with champion and challenger, did Calzaghe go against the grain and pick George Groves to pull off the colossal upset?

“Groves is a nice boxer but he’ll have to stamp his authority in this fight,” said Calzaghe. “He can’t go in there and run away for 12 rounds, because that won’t work against Froch. He’ll have to impose himself and earn that respect.

“A lot of people are making a big deal out of Carl dropping him in sparring, but George has improved a lot and it’s whether he can raise his game again. From a technical standpoint he could outsmart Carl, but can he do it for 12 rounds?

“It’s one of those fights where Groves has a real chance, but the result depends on his ability to absorb damage. He’s up for the fight and he has the skills to compete, but Froch is the favourite for a reason and has a real advantage in experience.”

So in the end the great former champion leaned slightly towards a Froch victory.

Since Calzaghe’s retirement, five years ago, he has remained a tantalizing target for many reigning and former world titlists. Froch gave up on his quest but Andre Ward, Antonio Tarver and old foe Bernard Hopkins have all attempted to lure “Super Joe” back into the ring.

To this point their respective efforts have been met with apathy or tongue in cheek, depending on the mood.

“I met Bernard (Hopkins) in Las Vegas and said he wanted a rematch at the Millennium Stadium,” said Calzaghe. “I decided to play it up and told him it wouldn’t be a 50/50 purse split, so he asked what I had in mind. I said 60/40 to me and that shut him right up.

“He laughed and said we can negotiate, but it was great the way he said it. I have massive respect for Bernard Hopkins as a former opponent and for what he has gone on to achieve, since we faced each other.

“I find it respectful when fighters of that caliber call me out because it means that I’m still one of the biggest names in the game, despite the fact that I’m happily retired.” 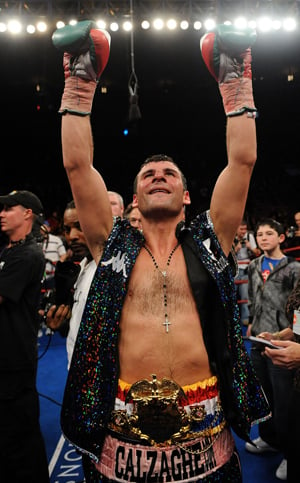 So what lies ahead for Calzaghe? Ballot papers were recently distributed to voters for next year’s Hall of Fame ceremony in Canastota and the Welshman, along with multi-weight titlists, Oscar De La Hoya and Felix Trinidad, are considered locks for the Class of 2014.

“I didn’t think about the Hall of Fame when I was fighting,” said Calzaghe. “I was always confident that I would become world champion, but I didn’t think I would reign for as long as I did, or take part in as many big fights.

“It’s an honor when people say I’m being considered for next year, and if I did get in then it would be a proud moment for me and my family. My Dad (Enzo Calzaghe) trained me for my entire career and I wouldn’t be where I am today without him.”

This reporter elected to play on Calzaghe’s modesty by suggesting that he knows full well that an induction is all but guaranteed, but the ex-champion was as evasive on the subject as he could be in the prize ring, and refused to bite.

“Come on man, do you know something I don’t?” laughed Calzaghe. “As I said, it would be an honor to be there alongside great fighters like Oscar De La Hoya and Felix Trinidad. It is something that I could look back on forever.”