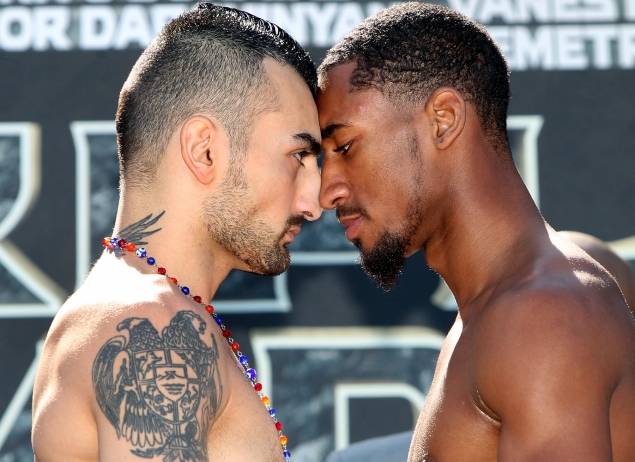 RingTV.com has a live, round-by-round update of tonight’s WBO junior middleweight title bout between unbeaten 2004 and 2008 Olympians Vanes Martirosyan and Demetrius Andrade, after which Andrade won by split-decision after rising from a first-round knockdown as part of an HBO tripleheader airing live from American Bank Center in Corpus Christi, Texas.

Martirosyan (33-1-1, 21 knockouts) was coming off a second-round knockout of Ryan Davis in June that followed a draw with left-hander Erislandy Lara in November of last year, and

Andrade (20-0, 13 KOs) was last in the ring for a unanimous decision over Freddy Hernandez in January, after a streak of four consecutive stoppage victories, and had expressed confidence for a resounding victory, and, in fact, of scoring the stoppage win against Martirosyan.

Click here for Who wins Martirosyan-Andrade? Ask the experts

Round 1: Fighters didn’t touch gloves before the fight. Southpaw Andrade pumping the jab. It’s short. Andrade’s lands a right out of a clinch. Still pumping the jab and some counter lefts. Solid jab by Andrade. Long, lengthy jab. Lead lefts by Andrade. ANDRADE’S DOWN FROM A COUNTER-LEFT. HE’S UP QUICKLY. FIRST TIME DOWN IN HIS CAREER!!!! He gets out of the round safely. Martirosyan, 10-8.

Round 5: Andrade out-landed Martirosyan, 23-11, in the fourth. More of the same in the fifth, although Martirosyan targets the body more. Good left cross by Andrade and another. Right hook by Andrade. Good side-to-side movement from Andrade, who lands a straight left. Martirosya’s right hand threads the defense of Andrade, who ends with a three-punch combination. Andrade, 10-9; Andrade, 48-46.

Round 7: Steve Weisfeld has it 58-56 for Andrade, who landed 40 power shots in the sixth. Andrade’s still pushing the pace behind his jab and movement, beating Martirosyan to the punch. Left uppercut by Andrade, who takes a long right. Martirosyan can’t seem to get off successive blows, even as hhe connects with two right hands late. Andrade’s activity still takes the round, even as Martirosyan lands a left uppercut prior to the bell. Andrade, 10-9; Andrade, 68-64.

Round 12: Andrade has landed 204-to-94 punches for Martirosyan, overall. Andrade’s father and trainer, Paul, told him to win the round. He’s doing it, pumping the jab aggressively. Counter-left and then a right by Andrade out of a crouch. Easy work. Hard to believe Andrade was ever down in the fight. Andrade’s still forcing the issue behind his jab at the bell, landing two lead lefts prior to the bell. Andrade, 10-9; Andrade, 116-111.