Best of Ward is yet to come, says trainer 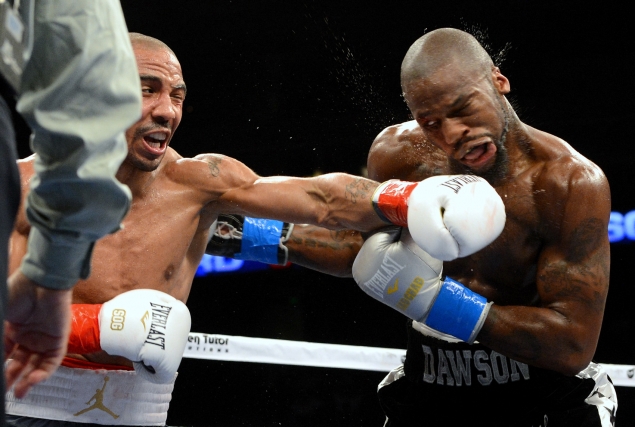 During one point in HBO’s 2 Days, which aired on Tuesday night, there was an interesting exchange between network commentator Jim Lampley, RING super middleweight champion Andre Ward and Ward’s trainer, Virgil Hunter, the day before Ward’s bout with Chad Dawson in September of 2012.

Asked to train Ward as a teenager by the fighter’s late father, Frank Ward, Hunter was responding to a question by Lampley concerning the desire of many fans and media members to see boxers in “a life-and-death fight.”

“I have a responsibility to young men in my care when they come into the art of boxing, and I pose the question all of the time to the media,” said Hunter.

“If you have a son, and you take him to a coach, and that coach tells you, ‘I can teach him how to give and take. If he gets his nose broke, he’s going to break the other guy’s nose.’ And then, you come to me, and I say, ‘Mr. Lampley, I can teach your son how to hit an opponent and not get hit back,’ now, who are you going to leave your son with?”

Hunter continued by saying “the boxing world hasn’t seen the best of Andre Ward … I would say, right now, he’s at 75 percent of what he can do.”

Ward went on to score knockdowns in the third, fourth and final rounds of a 10th-round stoppage of Dawson, who was knocked out for the first time in his career.

A 29-year-old Olympic gold medalist who rose to prominence by winning the Showtime Super Six tournament over current IBF counterpart Carl Froch in 2011, Ward (26-0, 14 knockouts) will return to action on Nov. 16 against Edwin Rodriguez (24-0, 16 KOs) at Citizens Bank Arena in Ontario, Calif.

In March, Rodriguez, 28, scored a unanimous decision over previously unbeaten Ezequiel Maderna. In July, Rodriguez smoked Denis Grachev at 2:50 of the first round. With the wins over Maderna and Grachev, Rodriguez emerged victorious from the four-man Monte Carlo Million Dollar Super Four tournament in Monaco.

“When I step into that arena, there’s something in me as an athlete that says, ‘it’s time to go.’ I definitely get into a deeper zone,” said Ward. “But it’s also a peaceful feeling, because I’m ready. I’m just ready to wrap up and to just get going, and time can’t move fast enough.”