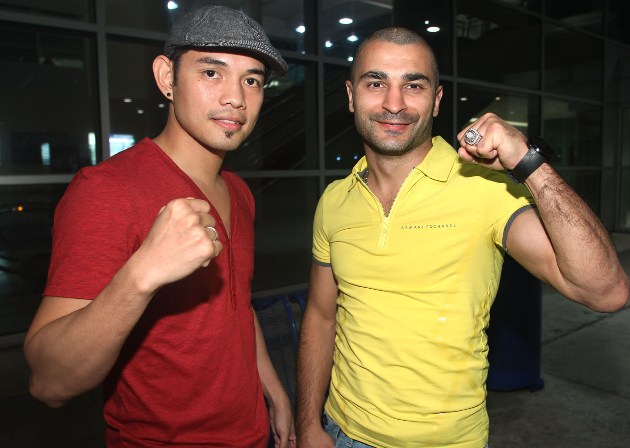 A similar suggestion was made to Vic Darchinyan during a Tuesday conference call four days ahead of his featherweight matchup with Nonito Donaire.

“I think so, yes. I think so. That’s why he chose me after his loss to Rigo,” said Darchinyan, referring to Donaire’s last fight, a unanimous-decision loss to Guillermo Rigondeaux.

“I think, also, that Nonito was exposed. Nonito, you know, he had a good name last year. He was The Fighter of The Year. But, really, in my mind, it’s because of me, I know. It’s about skills, it’s about power. I’m going to show what I’m all about since what happened, six years ago, when I lost to Nonito.”

“Six years ago” was when Darchinyan, then an unbeaten IBF flyweight titleholder, met Donaire’s counter left hook and was knocked out in the fifth round of what became The Filipino’s signature win.

Darchinyan, 37, has won two straight since losing consecutive unanimous decisions to Anselmo Moreno and Shinsuke Yamanaka, and is coming off a fourth-round stoppage win over Javier Gallo in May.

Meanwhile, Donaire, who turns 31 on Nov. 16, is very aware that he is in for a fight on Saturday.

On HBO Pay Per View, Bradley-Marquez sold 375,000 pay-per-view units, according to according to Yahoo!Sports and Top Rank President Todd duBoef. That number represented a profit considering the break-even point of 350,000 attributed to Top Rank CEO Bob Arum.

Arum said that a rematch between Julio Cesar Chavez Jr. and Bryan Vera, is now is being targeted for Feb. 8 likely in Vera’s home state of Texas. Chavez-Vera I began with controversy when Chavez’s failure to make weight led to a 173-pound catchweight that was negotiated by Arum and Vera’s promoter, Artie Pelullo, and ended with a controversial unanimous decision in favor of Chavez. The return bout would happen at the super middleweight limit of 168, according to Arum.

Arum and Pelullo will be in Corpus Christi starting on Wednesday for Saturday’s Donaire-Darchinyan fight, which is happening on a card that includes RING featherweight champion Mikey Garcia challenging WBO junior lightweight beltholder Roman “Rocky” Martinez, as well as a junior middleweight clash between Vanes Martirosyan and Demetrius Andrade for the WBO’s vacant belt.

Arum said that Pelullo, who promotes Andrade, will be in Corpus Christi and that HBO executive Peter Nelson will be on hand as well.

“We have to have a date from HBO, which, hopefully, with Peter down in Texas tomorrow and Artie being there, too, we can work it all out. We’re looking for a date in February,” said Arum, then referred to the Feb. 7-through-Feb. 23 Winter Olympics in Russia. “They’re reluctant to program against the Winter Olympics, so we have to figure that out. Feb. 8 is really before the competition starts, so that could be a possibility.”

“Moruti Mthalane’s mandatory must take place on or before January 29, 2014,” stated Peoples. “I don’t have the exact date for the fight yet.”