THE RING Magazine December issue: At a glance 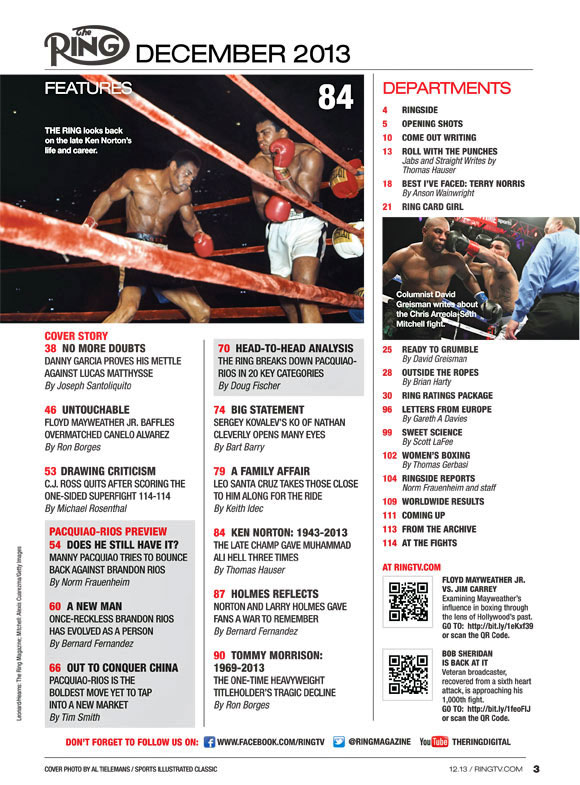 Danny Garcia has been battling both his opponents and skeptics for most of his career.

He has taken care of business between the ropes, compiling a record of 27-0 (with 16 knockouts) and winning THE RING and two sanctioning body junior welterweight titles. And he is winning over his doubters, particularly after his impressive victory over favored Lucas Matthysse on the Sept. 14 Floyd Mayweather Jr.-Canelo Alvarez card.

Garcia uses the skepticism as motivation but, he says, he doesn’t really care what people think.

“The only thing that matters,” he said, “is what I know I can do and what my team and father knows I can do.” 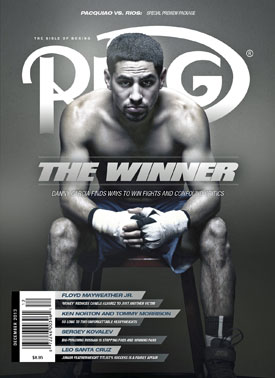 As part of our cover package, Bernard Hopkins weighs in on the accomplishments of his fellow Philadelphian. Plus, we list 10 of the best fighters from a city with a proud boxing tradition.

Also in the December issue, in No Contest, contributor Ron Borges looks back at the biggest fight in recent years -Mayweather vs. Alvarez.

“The One” generated the most money of any fight in history, which was no great surprise given the magnitude of the event and the cost of pay-per-view. The fight itself didn’t live up to the hype, though, as Mayweather dominated his bigger, stronger, but less-evolved opponent from beginning to end.

Mayweather told us beforehand: “This is not a fight. This is what we call an event!”

Along with Borges’ story, we lament in 114-114? judge C.J. Ross’ inexplicable scoring of Mayweather-Alvarez and evaluate the event in our Report Card.

In ‘I’m Not Finished,’ written by contributor Norm Frauenheim, Pacquiao insists that he has more fight left in him even though he is coming off a one-punch knockout loss against Juan Manuel Marquez. We’ll see. The only certain thing is that one of the sport’s biggest figures is at a crossroads.

Contributor Bernard Fernandez writes in No Looking Back that Rios acknowledges missteps in his past, including multiple brushes with the law, but says he has evolved into a good citizen who is focused on his young family and boxing career.

In Fanning Out, contributor Tim Smith explains that the decision to stage the Pacquiao-Rios fight in China is the biggest step yet to tap into a massive market that has not been exposed to the sport on a large scale.

And Doug Fischer, editor of RingTV.com, provides a head-to-head analysis of the fight. (Note: You can read Fischer’s analysis here.

Elsewhere in the issue, contributor Bart Barry writes in First Step to Greatness? that hard-punching light heavyweight Sergey Kovalev of Russia made believers of many fans by destroying Nathan Cleverly in August. ÔÇª

In Family Fueled, written by Keith Idec, unbeaten junior featherweight titleholder Leo Santa Cruz said that he wouldn’t be successful without those closest to him. ÔÇª

And THE RING looks back on the lives of two unforgettable heavyweights who passed away recently, Ken Norton and Tommy Morrison. In Ali’s Other Nemesis, Thomas Hauser writes that Norton will be remembered most for giving Muhammad Ali hell three times. And in Star Crossed, Borges describes the tragic decline of Morrison.