Lem’s latest: An old Pacquiao or the Pacquiao of old? 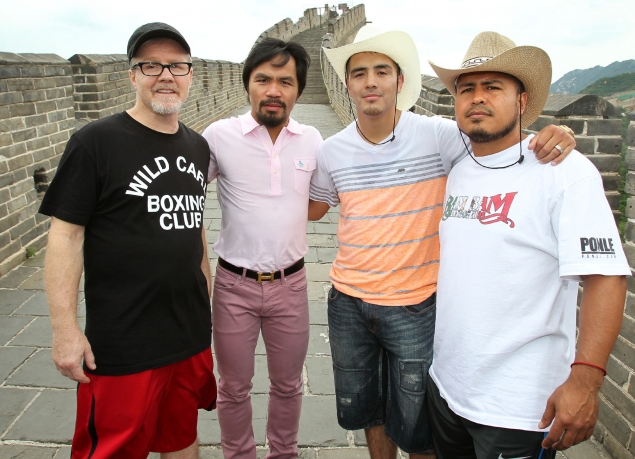 HBO has provided the second round of training blogs taken from interviews on Monday with eight-division titlewinner Manny Pacquiao and rising junior welterweight contender and former lightweight beltholder Brandon Rios in advance of their 147-pound HBO Pay Per View clash in Macau on Nov. 23.

Pacquiao has lost his past two fights: by disputed split-decision against Tim Bradley in June of 2012, and by sixth-round stoppage against four-division titlewinner Juan Manuel Marquez last December.

Rios was last in the ring as a 140-pounder in March, when Mike Alvarado won a unanimous decision to avenge a seventh-round stoppage loss from October of 2012.

In the blog, Pacquiao answers the question: How dangerous of an opponent is Rios in your eyes?

Pacquiao: “Brandon Rios is an extremely dangerous opponent. He is young, strong and has no quit in him. I raced him up the steps of the Great Wall. He’s a competitor.

“I have seen Rios fight, and I am confident that I will win the fight. One of my advantages is my experience against better opposition. A more diversified opposition. Rios is an aggressive fighter.

“The focus of this camp has been on speed and footwork, which have been my advantages in previous successful fights. I’ll be more careful to avoid the careless error I made against M├írquez.

Click here for a video of Pacquiao’s greatest hits

“I want to prove to everyone that I still can fight like the old Manny Pacquiao. I need to restore the public’s confidence in me and my abilities. It’s important that this be an impressive victory.

I have already begun to visualize my fight with Rios. My gameplan for Rios will be similar to the one I had for Ricky Hatton.

“That fight didn’t go long enough for me to unveil everything. Maybe this time, I’ll be able to show more of that plan. Maybe.” 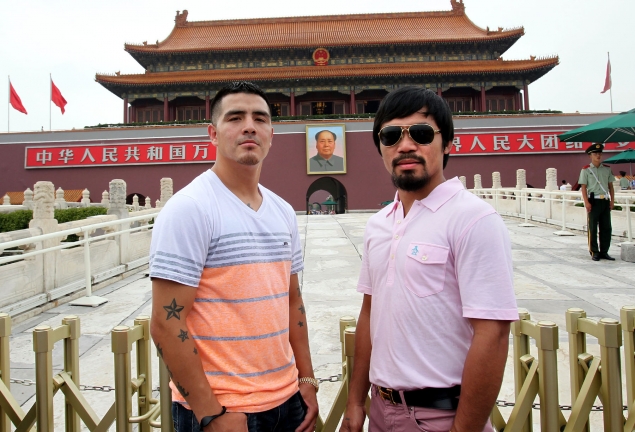 In the blog, Rios answers the questions: What makes Brandon Rios must-see TV?

Rios: “Well, everybody already knows how I fight. Everybody knows I come and fight with my heart and balls. I leave it all in the ring and there are no limits. People like that at the fights. The fans already know I will not give them a boring fight, because every single fight I have brought my exciting style of fighting to the ring.

“There have been fights where the opponent has not let me give the fight I like to give, but that doesn’t stop me from trying. For example, when I fought Anthony Peterson in 2010, I tried giving fans what they paid to go see, but he kept giving me low blows. Even with the low blows though, I still let it go and fought the way I fight.

Click here for a video of Rios’ greatest hits

“As a matter of fact, the low blows just got me angrier and I came back stronger, which I think he realized, because he would come back with another one. With Richar Abril, same thing. I trained for the fight hard, like I always do. Had no respect for him because of the fact he had disrespected me in Florida that same year.

“So that just made me train harder and prepare myself well for the fight. When I came in to the ring and we started fighting, I noticed he kept clenching and didn’t stop. I tried to change my game plan, but it seems like he wanted to slow dance the whole time. Of course I got frustrated because I am used to giving the fans a different kind of fight, not see a slow dance.

“I can only do so much though, because both opponents need to want to fight in order to give the fans the fight they want to see. He wasn’t willing to engage. I now train in a way to fight different fighters, not just brawl, because at the end of the day, I don’t know how my opponents train to fight me.

“Come Nov. 23, I can guarantee Manny Pacquiao and myself will give the fans the fight of the year. Why? Because Pacquaio has established that he is an elite fighter. I think I have proven throughout my professional career, and especially the last two fights against Mike Alvarado, that I am an exciting fighter –a fighter the fans want to see live.

“The first fight against Mike Alvarado, I remember Hall of Famer Michael Buffer said it loud and clear, ‘Ladies and Gentlemen, after six and a half rounds and perhaps the greatest fighting you will ever see has finally come to an end.’ That was two warriors going at it. Mike and I gave the fans a great fight.

“That’s how I like to fight, that is my style of fighting. Same thing with Rios vs. Alvarado II. People usually don’t like sequels, but even if I lost to the cards that night, both Mike and myself did not let the fans down. We both fought our hearts out and left it all in the ring. That’s how it should always be. Fight your way to the top.

“Fight for your fans, because at the end of the day, the fans, whether they love or hate us, they’re the ones who pay for our sport. Us, the fighters, we have to keep boxing alive by fighting the way the greatest fighters have always fought. Leaving it all in the ring, taking the fights the fans want us to fight. Entertain them and make every fight must-see TV, that’s what I do for my fans and my haters.”

Bradley’s split-decision victory over Marquez on HBO Pay Per View last month sold 375,000 pay per view units, according to Top Rank President Todd duBoef. According to Yahoo!Sports, that the number represented a profit considering the break-even point of 350,000 attributed to Top Rank CEO Bob Arum.

On Nov. 15, The Las Vegas-based Cleveland Clinic Lou Ruvo Center for Brain Health will host a fighter health event from 5:45 to 8:45 p.m.

Sponsored by Cleveland Clinic and Voluntary Anti-Doping Association, this free, educational health event is designed for professional and amateur boxers and MMA fighters, trainers and managers.

Program topics include recognizing signs of concussion and the effects of repetitive head trauma, maintaining optimal nutrition amidst the challenges of rapid weight loss and understanding performance-enhancing drugs and the latest trends.

Bradley became an advocate for safety in boxing following his victory in March over Ruslan Provodnikov, who floored him in the 12th round. Bradley said that he suffered from headaches and slurred speech for weeks afterward the win over Provodnikov and required medical examinations from neurologists.

“The point is that a lot of fighters probably go through what I went through after certain fights. I’m here to tell them that, basically, there’s help out there. You can get help,” said Bradley, prior to facing Marquez, about his recovery process, owing to his desire to shed light on the dangers of being a professional boxer.

“I got the help out there, and I’m basically here to just speak out. A lot of people feel that I shouldn’t speak out about it. That I should keep it a secret. But for some reason, I want to talk about it, you know. Because I went through it. I want to share it with the world to let them know that it is true about boxing. It is a dangerous sport. When you come into a fight, you might not leave the same way.”

Bradley said that his future plans included participating in procedures conducted by the Lou Ruvo Center, which has engaged in comprehensive brain imaging of professional boxers.

“I want to help these fighters and just let them know that there is help out there, and that I received help,” said Bradley. “I’m 100 percent better than in the Ruslan fight, mentally. My mental clarity is there. I’m very focused, very determined.”

Filipino featherweight Ana Julaton (13-4-1, 2 KOs), who has been featured by RingTV.com’s Mark Ortega, overcame a cut over her right eye to earn Saturday’s majority decision over Mexican Perla Hernandez (10-7-3, 2 KOs) in Mexico and bounced back from a unanimous decision loss to Mexico’s Celina Salazar in August.

“This is the kind of fight I have always wanted,” said Hernandez-Harrison, who won by scores of 98-92, 98-92 and 100-90. “He came to fight as did I, and I am glad we were able to put on a great show at Madison Square Garden. It is truly an honor to win my first world title in the building that so many great champions have fought in.”

Click here for a video of Hernandez-Harrison versus Torres