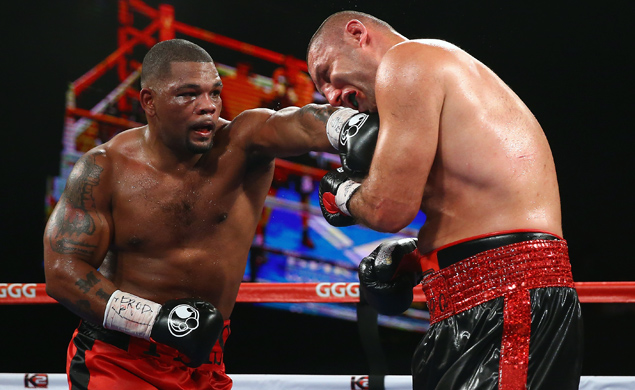 Mike Perez outboxed and outworked Magomed Abdusalamov over 10 action-packed rounds on Saturday in New York City. The Cuban amateur standout also fought the Russian KO artist on even terms en route to a unanimous decision by scores of 97-92 (twice) and 95-94.

The fight, which was the co-featured bout to the Gennady Golovkin-Curtis Stevens middleweight title bout, was one of the better heavyweight scraps that fans have witnessed in quite some time.

Perez (20-0, 12 knockouts), the better boxer, surprised fans and Abdusalamov by starting fast and aggressive. The Ireland-based boxer backed up his fellow southpaw, who had won 18 straight bouts by KO coming into the HBO-televised fight. Perez, who kept his busy pace up through 10 rounds, hurt Abdusalamov’s nose in the opening round and heaped more punishment on the Russian’s face as the fight waged on.

Abdusalamov suffered a busted nose, a swollen left cheek, a bad cut over his left eye and a mouse under his right eye. But he never gave up and did his share of damage during the back-and-forth battle, even bloodying the Cuban’s mouth and giving him a cut under his right eye.

“This was the toughest guy I faced,” Perez admitted after the fight. “He hurt me a number of times, but I was able to keep on going. The difference was my conditioning. My first time training with Abel (Sanchez) in Big Bear (Calif.) made all the difference in the world.”

With the victory, Perez becomes a much-needed player in the heavyweight division, which hasn’t hosted many entertaining fights in recent years.

“I’m willing to fight anyone in the heavyweight division anytime,” Perez said.

If he continues to fight as hard as he did on Saturday, fans will tune in. The same can be said of Abdusalamov.