Mike Perez: from Cuba to Ireland to NYC for HBO debut 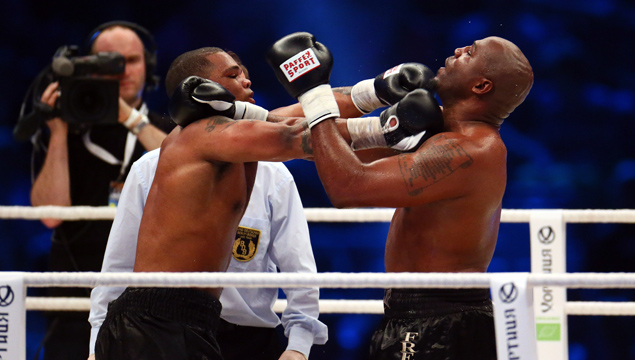 Mike Perez (left) snaps the head of Travis Walker during their heavyweight bout at SAP Arena on May 4 in Mannheim, Germany.

Mike Perez fled Cuba in Dec. 2007 with his sights on a better life.

Unlike the majority of top amateur boxers who defect from the communist country, however, the then 22-year-old Perez didn’t settle in Miami afterward. Since Jan. 2008, Perez has called Cork, Ireland home.

At the beginning, it was a lonely existence for Perez in Ireland. He didn’t know anyone, and he didn’t speak any English. And it was frigid, the kind of bitter cold Perez had never experienced in his tropical homeland.

For 10 cold, hard months, Perez kept to himself and trained at the boxing gym. He walked everywhere because he had no car, but the experience got him to where he is today: In New York with a fight tonight on HBO’s World Championship Boxing at the Theater at Madison Square Garden. He fights Magomed Abdusalamov with a shot to announce a new player in the barren heavyweight landscape.

“This is not only my dream, it is dream of every fighter,” Perez told RingTV.com in a phone interview Thursday, his Irish twang punctuating every word. “This is the biggest of them, Madison Square Garden. Every fighter dreams to fight at MSG. Not only me — every fighter; every pro.”

Perez (19-0, 12 knockouts) competed in several major amateur tournaments and traveled a lot, good preparation for the pressure of the big stage. He won a gold medal at the 2004 World Junior Championships in South Korea, fighting as a light heavyweight. Perez then competed on the Cuban team that earned a silver medal at the 2005 World Cup in Moscow, Russia. In 2007, Perez won a silver medal as a heavyweight at the Cuban National Championships, besting current top heavyweight prospect Luis Ortiz along the way.

At just 6-foot, Perez is small for a heavyweight, especially by today’s standards. But he’s a southpaw, and has a compact build (he weighed 235 at Friday’s weigh-in.) He’s faced the garden variety of heavyweight journeyman in his last three fights: wins over Zach Page, Friday Ahunanya and Travis Walker. And before that, Perez, 28, won the international Prizefighter tourney in the UK, scoring a first-round stoppage of Tye Fields in the finals.

But in Abdusalamov, Perez is facing the toughest test of his career. Though Abdusalamov is raw, he has displayed crushing power and an affinity for brawling.

“I have all my confidence that I can win the fight no matter what,” Perez said. “I just can’t wait for the night. I’ll be ready to fight everything. Not every fighter gets an opportunity like this.”

And if Perez can win Saturday and in exciting fashion in a division desperately in need of a good TV bout, well, perhaps Perez can establish a following in New York, the biggest hotbed of Irish imports in the U.S.