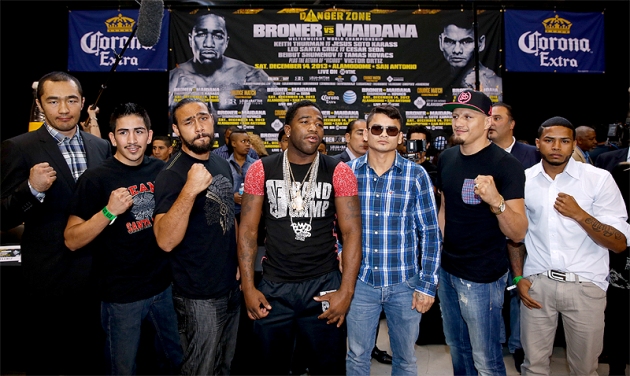 For unbeaten 24-year-old welterweights Adrien Broner and Keith Thurman, the theme of the day was will.

Broner claimed he has so much will that “my last name could be Smith,” while Thurman said that once his will emerges in his next fight, “it’s over for” his opponent.

“I am going for the knockout. Strap up…You can train different. You can lift weights with your teeth. You can push cars for two months straight. That doesn’t matter. I got the skills to pay the bills, and I got enough will, my last name could be Smith.”

“That’s right. San Antonio is now one of the top four premiere destinations for boxing in the United States. And our company, in partnership with local promoters Jesse James Leija and Mike Battah, are committed to bringing big-time boxing to this market on a regular basis. Showtime is going to continue the tradition of the best fighting the best, and Saturday, Dec. 14, Santa Claus is coming to town.”

In San Antonio, Thurman and Soto Karass return to the site of their last fights in July. Thurman scored a 10th-round knockout of Argentina’s hammer-fisted Diego Chaves. On the same card, Soto Karass rose from an 11th-round knockdown to drop and stop former two-time welterweight beltholder Andre Berto in the 12th.

“I come to bring the hurt,” said Thurman. “Fighters think they know what they’re getting into when they step into the ring. But no one can prepare for this. I am a beast. Dec. 14 is what I live for. That action. Getting hit, taking hits, giving hits. Seeing if they can take my hits, which they can’t do for long… I come with a passion, drive, desire and will. Not just ordinary will, but the will to be champion.

“You’ve seen that will in my last fight, and Soto Karass is the type of fighter that can bring that out in me again. Once that comes out, it’s over for him … Other than [Floyd] Mayweather, you are looking at the best welterweights in the world [on this card.] Adrien Broner is the world champ. I am interim champ. Marcos Maidana is ranked No. 1 by the WBA. This division is packed. I just happen to be one of the most talented.”

As for Broner, Maidana offered a simple retort.

“The key is to throw a lot of punches,” said Maidana. “Pressure him. Kick his ass, and that’s what I am going to do.”

Meanwhile, Ortiz (29-4, 22 KOs) will end an 18-month ring absence, having been cast for a role in the third installment of Sylvester Stallone’s The Expendables and participated in Dancing With The Stars.