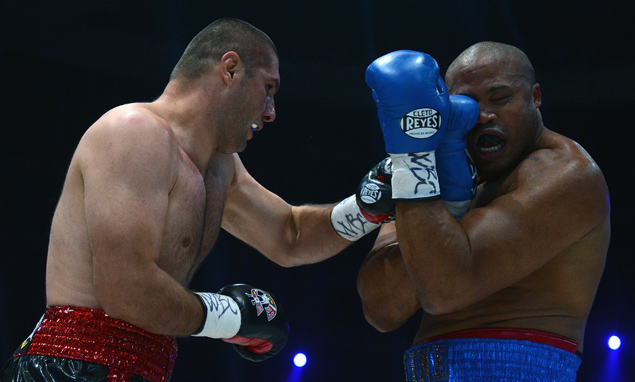 Russian prospect Magomed Abdusalamov got up from a first-round knockdown to stop American veteran Jameel McCline in the second round of their fight at Olimpiyskiy Arena on Sept. 8, 2012 in Moscow, Russia.

The heavyweight landscape has changed dramatically over the past 20 years. In decades past, the majority of the top heavyweights were from America and of African descent. Today, nearly all the top fighters are from Europe, most of them from the various countries that used to make up the former Soviet Union.

The Ukrainian Klitschko brothers, heavyweight champs Wladimir and Vitali, are at the top of the division, and have been for years.

However, looking to continue the “Soviet invasion” but supplant the Klitschkos is Russian Magomed Abdusalamov, who says he’ll bring the kind of excitement to the division that the brothers seldom bring any more. The 32-year-old southpaw currently holds an impressive record of 18-0, all by knockout with none of his fights having gone past five rounds.

While most fans are focused on Saturday’s middleweight shootout between WBA titleholder Gennady Golovkin and Curtis Stevens, the chief supporting bout to the HBO Championship Boxing main event is Abdusalamov versus fellow unbeaten prospect Mike Perez (19-0, 12 knockouts) in what also has the potential to be highly interesting.

“(Perez) has a very good style, a nice (boxing) style but I have a better style. I put pressure on him and we’ll see what happens,” Abdusalamov, who spoke with RingTV.com upon his arrival to New York City, where the HBO-televised card takes place, of Perez through his manager Boris Grinberg. 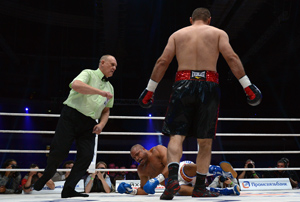 Abdusalamov’s promoter Sampson Lewkowicz, who also looks after the careers of Sergio Martinez and Chris John among many others, is a firm believer in his fighter.

“He was recommended to me by (former WBO heavyweight titleholder) Sultan Ibragimov,” Lewkowicz said. “I happened to remember ‘Mago’ as I was present at his pro debut in Moscow and I have all of the confidence to state that there is no doubt in my mind that Magomed ‘Mago’ Abdusalamov is a future heavyweight champion of the world.”

The action takes place from the Theater at Madison Square Garden live on HBO at 10:00 p.m. ET/PT.

Anson Wainwright: What are your thoughts on this fight?

AW: He’s known as a stylist. You’re a come forward and aggressive type. It looks an interesting style match up? What do you think of him as a fighter?

MA: He has a very good style, a nice style but I have a better style. I’ll put pressure on him and we’ll see what happens.

AW: It takes place at the Theater in Madison Square Garden live on HBO. Your thoughts on this platform?

MA: It is actually my second fight at Madison Square Garden Theatre. Jason Pettaway was my opponent the first time. (He was) also an unbeaten heavyweight and we beat him. But New York is always an amazing place to fight, especially Madison Square Garden, “the Mecca” of boxing. I want to thank HBO for this opportunity to fight with such a good boxer.

AW: You train in Oxnard, Calif., at Sergio Martinez’s gym. What can you tell us about your relationship with “Maravilla”?

MA: Sergio is a very close friend of mine. I’ve had a great training camp there. I respect the trainers very much. Although I haven’t seen him (Sergio Martinez) in awhile we do keep in contact. I’m sure he’s training as hard as ever.

AW: If we go back, you were a good amateur you won national titles. Can you tell us about what titles/tournaments you won? What was your final record in the amateurs?

MA: I was an amateur fighter, two-time Russian champion. I had a very nice career. I knocked a lot of people out with the big gloves, with the small gloves. I’m even more dangerous (now).

We had about 60 fights with about two or three loses, including to David Price where I feel I was cheated out of the win. That loss prevented me from fighting at the Olympics. I always wanted revenge on Price. I felt like every point they were giving him he was only hitting me on the arms. I still remember this and still want revenge to this day.

AW: How did you first become interested and take up boxing?

MA: I was in Muay Thai and kickboxing. I had injuries to my leg and I went to boxing when I was 23.

AW: You’re from Makhachkala in Russia. Can you tell us about what it was like for you when you lived there?

MA: Yes, it’s not easy. Dagestan is the most dangerous country in Russia, lots of criminals. It was very tough.

For example, HBO asked for photos, even as a teenager, and I don’t have any photos when I was younger. Here everyone takes photos all the time. There it’s pretty rare.

AW: You’re record is 18-0 with 18 stoppages. That’s highly impressive. Tell us a little about your power?

AW: What are your thoughts on the heavyweight division?

MA: It’s lacking excitement. We want to wake up this division and put it to where it was before on the top of boxing. The Klitschkos are very good but they never fight. (Wladimir) is the most boring fighter there is.

AW: Recently in your homeland Wladimir Klitschko fought Alexander Povetkin. Did you see that fight?

MA: It was the worst fight it could have been. It was a terrible fight.

AW: How far do you feel you are from fighting for a world title?

MA: It depends on the politics of the WBC. With two or three fights we’re ready.

AW: Away from boxing tell us about yourself. What do you enjoy doing?

MA: I’m a big family man. I have an amazing wife and three amazing girls. My third daughter was born on the first of January. I’m very family orientated. I have many friends and family back at home that I stay in contact with so I’m always on Skype. I live, breath and eat boxing.

AW: Lastly, do you have anything you’d like to say to the heavyweight division?

MA: The message is Mago is coming.

Photos / Lars Baron-Bongarts
Questions and/or comments can be sent to Anson at [email protected]and you can follow him at www.twitter.com/AnsonWainwright