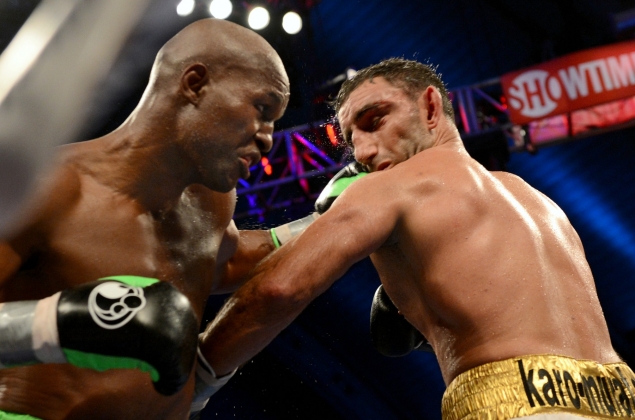 Bernard Hopkins brawled his way to a virtual rout of Karo Murat in defense of the IBF light heavyweight belt on Saturday in Atlantic City to extend his own record as the oldest man to win a significant crown.

In doing so, Hopkins headlined a tripleheader that drew the second largest average audience for a live Showtime boxing event this year, one that ranks as the third-highest average on record for the network since 2004 when Nielsen began tracking pay television networks’ individual channels.

On the undercard, heavyweight knockout artist Deontay “The Bronze Bomber” Wilder’s (30-0, 30 KOs) scored three knockdowns during a fourth-round stoppage of Nicolai Firtha, and WBO middleweight titleholder Peter “Kid Chocolate” Quillin dropped his man in the second round of a 10th-round technical knockout victory over Gabriel Rosado.

Hopkins-Murat attracted a peak audience of one million viewers, ranking third for the year behind June’s split-decision by Adrien “The Problem” Broner (at 1.3 million) that dethroned Paulie Malignaggi as WBA welterweight titleholder, and April’s unanimous decision by Canelo Alvarez over 154-pound rival Austin Trout (at 1.1 million).

“Showtime has quickly emerged as the premiere destination for big-time boxing,” said Stephen Espinoza, executive vice president and general manager of Showtime Sports, whose network has seen its top-five largest boxing audiences in the last 13 months with the Hopkins-Murat, the fifth-highest on record for Showtime.

“We have the biggest stars in the sport fighting their most challenging, and often career-defining fights. It’s no surprise that our subscribers have responded. We are thrilled with the gains we have achieved thus far, but we are not finished yet. It all starts with the commitment from the fighters–and their promoters–to challenge themselves against top contenders.  As such, the drama has never been greater, the stakes never higher.”

On Dec. 14 on Showtime, Broner will defend against Marcos Maidana from The Alamodome as the main event to a card that also features WBC junior featherweight beltholder Leo Santa Cruz in a defense of his belt against Cesar Ceda, hard-hitting welterweight standouts Keith Thurman and Jesus Soto-Karass, WBA light heavyweight beltholder Beibut Shumenov against unbeaten Tamas Kovacs, and former welterweight titleholder Victor Ortiz in a matchup with rugged Alfonzo Gomez.

Also on the card is a match featuring hard-hitting heavyweights Magomed Abdusalamov and Mike Perez, whose referee will be referee will be Benjy Esteves, with judges Julie Lederman, John Stewart and Don Trella.

Cruiserweight Ola Afolabi will make his a return against Lukasz Janik on the card as well, being refereed by Earl Brown, and judged by Waleska Roldan, Jerry Roth and Joseph Pasquale.

Also on the card, former WBO junior middleweight beltholder Zaurbek Baysangurov will end what will be a 13-month ring absence when he meets journeyman Freddy Hernandez, as well as battle of welterweights between Dusty Hernandez-Harrison and Josh “Pitbull” Torres.

“At the moment I don’t think about the fact that a win over Leapai will lead to a world title shot,” said Boytsov, who is 27 while Leapai is 34. “It is all about my next fight. I need to be victorious in Bamberg. Afterwards, I can take it from there.”

Leapai has scored four straight knockout victories since, himself, being stopped in the ninth round by Kevin Johnson in April of 2012.

“I’m looking forward to working with Joe Hand. I’ve known Joe since 1997 when I turned pro and first trained at his gym. I would never train anywhere else. A lot of good fighters train there,” said Mansour.

“Whenever Joe comes into the gym, he always says hello and he’s very respectful. The main thing is that I trust him, and there are not a lot of people in boxing you can trust. He has explained the ins and outs of boxing to me, telling me things that most promoters and managers would never tell me.”

Mansour will work with promoter Russell Peltz, according to Hand.

“Amir and I became friendly through my gym. He reminds me of the punching power I saw in just two other fighters, George Foreman and Joe Frazier. He can punch with the best heavyweights around and he makes for good fights,” said Hand. “We will be working with Russell Peltz so far as promoting and making Amir’s fights. I’ve known Russell since 1969, and I know he can help us get Amir to the heavyweight championship.”

Lem Satterfield can be reached at [email protected].com