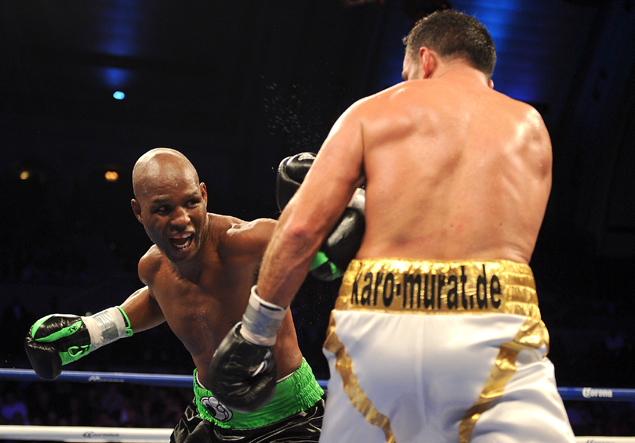 ATLANTIC CITY, N.J. – Bernard Hopkins tried to send a current of fear through Karo Murat by donning a fluorescent green alien head for his ring entrance.

But it looks as if Hopkins opted for the wrong motif. He should have worn a wrestling singlet. Hopkins was thrown, pushed, shoved, though hardly punched, and when he was hit, sometimes those punches came late. Yes, even Hopkins, known at times for dubious tactics, was undone.

That’s how ugly it got at times on Saturday night before 6,324 at Boardwalk Hall.

It would take Hopkins to depths he hasn’t been to in years (he planted a kiss on the back of the head of his German foe in the fifth round) en route to easily defending the IBF light heavyweight title for the first time.

It was the most energetic and exciting Hopkins (54-6-2, 32 knockouts) has looked in some time. He won a unanimous decision by scores of 119-108 on judges Julie Lederman and Joseph Pasquale’s scorecards and a 117-110 tally by judge Benoit Roussel. 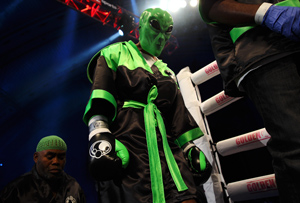 “I was going for the knockout, but he was really tough,” Hopkins said. “Showtime has the best light heavyweight in the world. I threw more punches. I wanted to be a crowd-pleaser. When you go for a knockout, you have to take some risks. I know I have a little bit of blood on me. But this is what they want to see.

“Never take your mandatory lightly. That guy would give anybody in the light heavyweight division problems. I know I had control of the fight. The plan was to let the dog follow the bone into the dark alley. He doesn’t know what he’s about to get into, but he’s waiting for him in the corner of the alley. He wouldn’t back down. I am a freak, an alien. I’m going to see the doctor about it on Monday.”

The opening round served as a prelude to what was coming. It involved more wrestling than punching, though “B-Hop” did get some choice shots in. During the early portion of the second, Murat (25-2-1, 15 knockouts) tried bum rushing Hopkins to no avail, not able to land anything substantial.

It was Hopkins that nailed Murat with a right to the kidneys in the closing seconds of the second round that had Murat wincing, holding his right side in pain. It was reminiscent of the punch Hopkins knocked out Oscar De La Hoya with.

In fact, the last time Hopkins stopped an opponent was over nine years ago, Sept. 18, 2004, when he left De La Hoya writhing in pain, crumpled against the ropes. 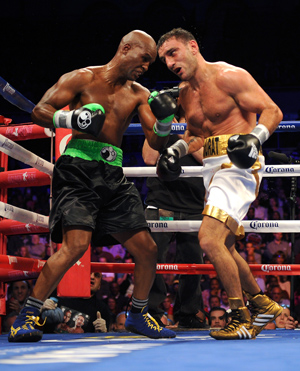 You could tell Hopkins wanted to desperately stop the annoying Murat, who survived the second and concluded the third by gripping Hopkins in a firm headlock. The move proved to be typical of the German fighter.

Murat went back to pushing, shoving and grappling in the sixth, which featured tossing Hopkins to the canvas, then hitting him while he was down. That was enough to cause referee Steve Smoger to issue his first warning to Murat about the roughhousing. In the seventh, Smoger took a point away from Murat for hitting on the break.

The added shot seemed to awaken some basement fire that had been working itself to the surface in Hopkins. He threw a ferocious combination at Murat that him retreating and in trouble.

At the end of the seventh, Smoger was so disgusted with Murat that he shoved him to his corner at the bell. The eighth marked another ferocious exchange that steamed Hopkins up so much that his trainer Naazim Richardson had a firm grip on his trunks, preventing Hopkins from going after Murat between the eighth and ninth rounds.

In the ninth, Murat did land a few shots, but Hopkins, in one of his most action fights in years, countered and answered back.

Each time Murat came with something, Hopkins came back with something harder. The times Murat thought he had Hopkins trapped against the ropes was when B-Hop was at his most dangerous.

In the last round, Hopkins broke out again with a torrent of shots.

But it was Smoger, ironically, that got possibly the best shot on Murat, slapping him as the final bell ended the fight.