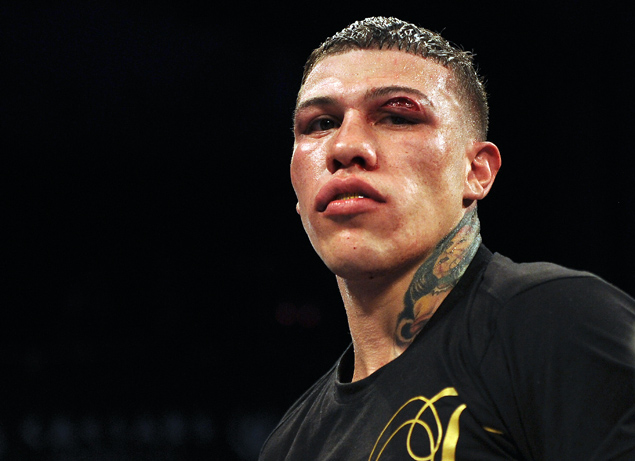 ATLANTIC CITY, N.J. – Peter Quillin remembers the streets. “Kid Chocolate” remembers well the times he would ride the trains throughout Brooklyn, N.Y., all night along.

“The streets” are where rugged Philadelphian Gabriel Rosado tried dragging Quillin in the WBO beltholder’s second title defense Saturday night at Boardwalk Hall. But the tactical Quillin, using distance, poise and clever ring generalship refused to go, resulting in a controversial 10th-round stoppage due to a bad cut that Rosado suffered over his left eye.

Quillin (30-0, 24 knockouts) remained undefeated by stopping the game Rosado but the announced result was greeted by a chorus of boos.

The judges saw a different fight than those at ringside. All three judges had Quillin ahead by varying scores, with judge Kason Cheeks having it 90-80, Ron McNair tallying 87-83 and Waleska Roldan scored it 89-81.

“I feel good, I feel like any fighter would defending their belt,” Quillin said. “It wasn’t easy, but I earned every bit of it. I’m not a judge. I’m not an elected official. I’m a fighter. I let the doctors do what they have to do to protect the fighter. I’m ready to fight anyone they put in front of me. I’ll defend the title against anyone, even my own mother.”

When he left the ring, it was Rosado who needed the sun glasses to protect his bruised and swollen left eye. But he also left to cheers. 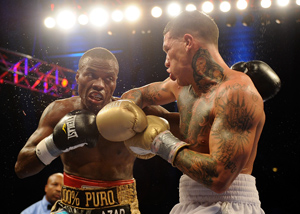 “I was walking him down and backing him up,” Rosado said. “They knew he was getting hurt and they stopped it. I knew the key was to get him up against the ropes. This is the story of my life. I’m the real-life Rocky Balboa.”

Quillin received a good spattering of boos from the partisan Philadelphia crowd that made the trek down to Atlantic City to see Rosado fight.

In the first round, Rosado seemed to be the one attacking. Quillin, ever focused on Rosado’s face, waited patiently to find an opening. “Kid Chocolate” finally connected with a right-left combination that gave him the round.

In the second, Quillin began opening up a little more, and felled Rosado with a left hook that caught him on the right ear.

By the fourth, it looked like Quillin would open up target practice. Each time he closed within striking range, his punches landed with thudding accuracy. Rosado didn’t seem to have any answers, as his left eye began to swell.

But in the last 30 seconds of the fourth, Rosado got back into the fight with one punch. He connected with an overhand right that caught Quillin flush on the jaw and stunned him. Rosado jumped on the retreating Quillin, still trying to collect him.

Feeling confident and robust, Rosado began toying with Quillin in the fifth. He held his left hand behind his back, taunting the Brooklynite. He stuck his chin out for Quillin to hit him, twirling his right hand. Quillin, meanwhile, still seemed rocked by the right from the previous round.

In the sixth, Quillin appeared to right himself. He plowed a right through Rosado’s twin-glove pillar defense that connected square on his face. He tapped Rosado with a left.

When Rosado tried crowding Quillin in the seventh, he responded with a right to the jaw and a left to the head. Rosado came charging back in the eighth, pressing forward and landing chopping blows inside.

After eight, some ringside observers had Rosado ahead, while others thought Quillin held a slight edge entering the championship rounds.

In the ninth, Rosado thought he hurt Quillin with a right to the temple. Again, Quillin fended off the burrowing Rosado by landing a stiff jab that opened a cut on Rosado’s left eyelid, which began leaking blood, but Rosado didn’t seem to be impaired by the cut.

Forty seconds into the 10th, referee Allen Huggins sent Rosado to his corner to have the ringside doctors look at his left eye. The doctors concluded Rosado could not go on, forcing Huggins to wave it over.

“This was a competitive fight, I said I was going to go through hell to win this fight,” Rosado said.