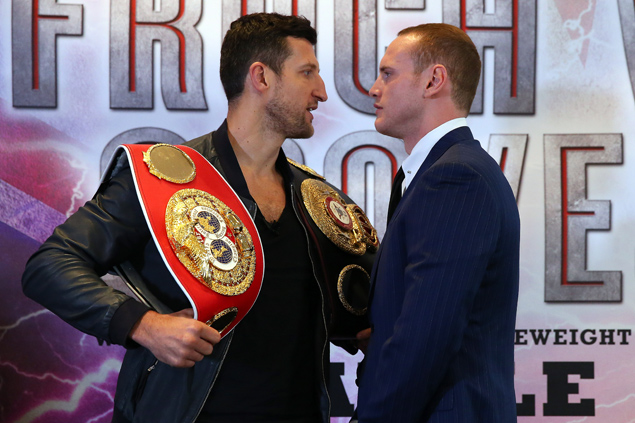 Carl Froch and George Groves go head to head to promote their upcoming fight during a press conference at the Radisson Blu Edwardian Hotel on Sept. 17 in Manchester, England.

British superstar Carl Froch has won and defended world titles at home and abroad since December 2008. At 36, the reigning IBF super middleweight titleholder and THE RING’s No. 1 168 pounder (behind champion Andre Ward) maintains the same meticulous training regime and on Nov. 23 will prove that all enemies remain on his radar, foreign and domestic, when he meets countryman George Groves.

Last time out Froch brushed up on some Danish by avenging his 2010 loss to Mikkel Kessler in a superb 12 rounder, which resurrected the pay per view platform for Sky Sports in the UK, and further established the Nottingham man’s credentials as one of the most successful British fighters in history. 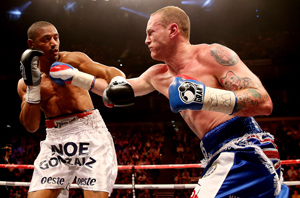 Earlier in the evening Groves, THE RING’s No. 5-rated super middleweight, had impressively blasted out Noe Gonzalez Alcoba and claimed to be ready for any 168-pound fighter on the planet. A pay-per-view bout with “The Cobra” seemed like a natural but when Groves was installed as mandatory challenger by the IBF it was all but rubber stamped.

Now “The Saint” will get the chance to prove his worth against a battle hardened warrior who has bested every prominent super middleweight, not named Andre Ward. If Groves is to prevail at the Phones 4 U Arena in Manchester there will be no doubting his worth, but the champion is determined to test his bitter rival to the limit.

RingTV.com spoke to Carl Froch about the bad blood showdown with Groves and no punches were pulled during the conversation, which is a follow up to a previously-run interview with the challenger.

RingTV.com: You’ve been involved in huge fights against the best opponents in your division but many critics, including yourself, feel Groves lacks the necessary experience. What are you using for motivation if that’s the case?

Carl Froch: My motivation is to win this fight and defend my titles in style. That is the only motivation I need.

RTV: I asked Groves to address the fact that many insiders feel this fight has come too soon for him. He referred to his fight with James DeGale because it was pay per view, all British, personal and high stakes. What is your reaction to that comparison?

RTV: George was tight lipped on who he was sparring with in preparation for the fight. Can you disclose who you’ve been working with and how is training going to this point?

CF: Training is going brilliantly but I prepare in a similar fashion for all my fights. I’m well-schooled on what I need to do in training and what I need to achieve in terms of numbers. My running and my sparring is smack on schedule. There are four weeks of hard training left and one week of tapering, so things couldn’t be better. In terms of sparring I’ll be working with Tony Bellew, Darren Barker and Callum Smith so that is competitive – very competitive – sparring.

RTV: When Groves went to Denmark to spar with Mikkel Kessler that is when a rivalry began to simmer between you both. How were relations between you prior to that?

CF: Non-existent. I haven’t really seen him in three years, which was around the time we sparred for the first Kessler fight (April 2010). Since then I haven’t taken anything to do with him, so there’s no relationship to speak of. There’s nothing good or bad I can say in answering your question. I don’t know the kid. 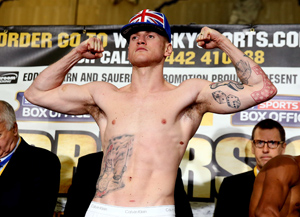 RTV: I asked Groves if there was anything that he admired about you and he said your ability to go to the well and your tenacity. Is there anything you admire about your challenger on Nov. 23?

CF: What do I admire? There’s nothing that jumps out at me, when it comes to George Groves. Recently he’s been very arrogant, so that’s the only word I associate with him – arrogance. He has very little respect but that’s not a problem because I’ve encountered that before against domestic fighters, when I was British champion. He’ll come to the ring with a game plan and his own ideas and fighters are frequently confident. Either he believes in himself or he doesn’t, but he’s talking like he does. I just know when I turn up that 99 percent of the time I get the job done. The only fighter, on my record, that I haven’t beaten is Andre Ward and he’s a great fighter. The Kessler score has now been settled and I’m very confident coming into this fight, due to the success I’ve had at the top level.

RTV: I notice when we speak that Andre Ward’s name always comes up. Is that rematch still in your mind? Will it ever happen?

CF: I don’t think it will because Ward doesn’t want the fight. He won’t come to England and I think it’s only fair that he does because the first fight was in the States. I’m not that interested now and television doesn’t seem to be either, but then I again I didn’t think the Groves fight would be made and here we are. Groves is British, with an unbeaten record, and it turned out that this is a huge fight over here, which sold out in a matter of minutes. I’m very happy to be defending my title against another British fighter in a big pay per view event.

RTV: Groves has switched trainers from Adam Booth to Paddy Fitzpatrick. In what ways could the trainer switch come back to haunt him, going into such a huge fight? 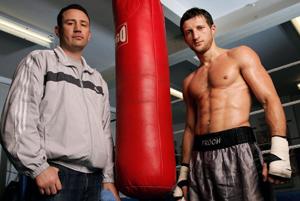 CF: I’m not sure and it would depend on the individual. I’ve never split from my trainer (Robert McCracken MBE) so I don’t have any experience on the subject. With Groves, it’s difficult for me to say whether it’s a positive or a negative because I don’t know what his relationship with Adam Booth was like prior to the split. I haven’t given it a lot of thought but I still wouldn’t be surprised if Booth turns up in his corner on the night. I don’t know anything about Paddy Fitzpatrick, although I must say, I don’t move in boxing circles outside of when I’m fighting. I’m just glad it’s not me because I have a very strong relationship with my trainer and I have so much respect for him. To this day I always try and impress Rob in the gym and I always give it 100 percent.

RTV: Groves admitted to me that you dropped him with a right hand in sparring but claims that he “beat you up” in Nottingham two days later. Do you recall that?

CF: (Laughs and sounds genuinely lost for words for several seconds) I don’t know if this is wind up or what? I decked Groves in sparring with a shot that I pulled and nothing about the rest of those sessions was memorable. When I sparred with Groves I could take my time with him. There are certain fighters where you have to be on your A-Game in sparring and be mentally switched on. There are also times where you have to throw lots of hard punches but with Groves I barely came out of second gear. I’m not just saying this but with certain sparring partners, who are in the amateurs, I would just move around and throw the odd jab and Robert (McCracken) would pull on the reigns, telling me to hold back. That was what the sparring was like with Groves. I don’t get beaten up in sparring and I never have been beaten up. Even when I was younger and I sparred with Howard Eastman, prior to his fight with Bernard Hopkins (in 2005), I didn’t get beaten up. That is just a ridiculous comment from George but maybe he needs to tell himself that. He’s in for a shock come fight night.

RTV: You have never been stopped and you’ve only been down once (against Jermain Taylor in April 2009) but Groves has said that you won’t hear the final bell. He also pointed out that he believes you are in decline as a fighter. What do you say to that?

CF: I think Groves is dead right. I won’t hear the final bell because the fight won’t go the distance and he’ll be knocked out. That’s all there is to it – simple!

RTV: You’ve achieved so much and will go down as one of the very best fighters Britain has ever produced. What else lies ahead in terms of your career?

CF: There are a couple of big fights which have been mentioned. At middleweight there’s Gennady Golovkin, who looks really powerful and he’s a very capable operator. That would have to be at super middleweight or he could meet me at a catch weight because it would be impossible for me to come down to 160 pounds. There’s also been talk of Julio Cesar Chavez Jr. and that’s another big fight in the States and over here in the UK.

RTV: How do you beat George Groves and what is your prediction for Nov. 23?

CF: It’s the old clich├® that styles make fights and it depends on what he brings. For me it’s just a matter of time before I catch him and knock him out. Any fighter I’m in there with gets caught flush, with the exception of Ward, who was so good at getting out of the way that I couldn’t connect with many big shots. The difference is that Ward is a great fighter, brilliantly schooled and very effective. Against Groves, between one and 12, I will connect on him because that is what I do. I land cleanly with those little 10-ounce gloves and as soon as that starts to happen there’s nothing he can do about it. He can’t take a punch and simply doesn’t have enough resistance. I won’t predict a round but I just hope he doesn’t stink the place out, by running like he did against James DeGale. After this fight I will still be champion.