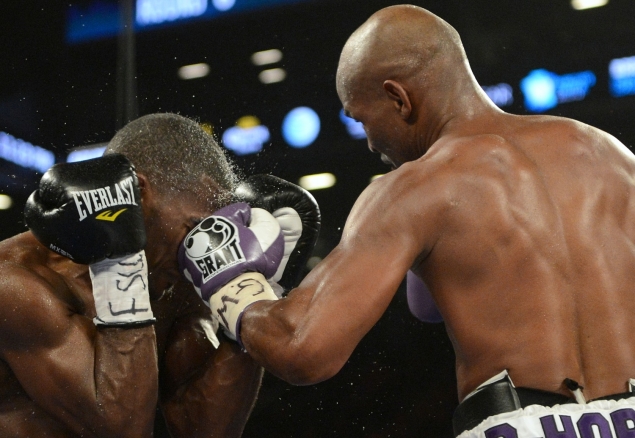 Bernard Hopkins W 12 Karo Murat: Karo Murat is the type of fighter with an excellent work-rate who out-hustles foes. But Bernard Hopkins has prolonged his career by neutralizing guys’ strengths.

In this case, that’s limiting Murat’s punch output.I think Hopkins fights in spurts and when he’s not doing that, outboxes Murat for a competitive but clear decision win.

Bernard Hopkins KO 7 Karo Murat: I’m through picking against Bernard Hopkins. The man is a modern miracle of medical science. It still would take someone “special” to defeat Bernard and I don’t see Karo Murat in that category.

He’s not busy enough and he stands up too straight. His arms-upright defensive posture will protect him only until Bernard figures it and him out. Although Hopkins doesn’t knock many people out, he’ll just be too good and finish off Murat somewhere midway through the fight.

Bernard Hopkins UD 12 Karo Murat: Two words: Too smart. Too experienced. Too talented. Too slick. Too much. But not too old — yet. Get the picture? Bernard Hopkins by unanimous decision over Karo Murat.

Bernard Hopkins UD 12 Karo Murat: Karo Murat isn’t getting enough credit for being a solid 175-pound contender. Still, Bernard Hopkins is a level above, and Murat will have a hard time dealing with his veteran bag of tricks all night.

I expect Hopkins to control the pace and limit Murat’s output on his way to a clear but tough unanimous decision somewhere in the 116-112 range.

Bernard Hopkins TKO 11 Karo Murat: The old man will add another win to the record books, but it won’t be pretty or even close.

Karo Murat is not good enough to take down the veteran, who will no doubt bemuse and confuse his opponent before forcing a late stoppage.

I think Hopkins will confuse Murat with his boxing ability and defensive prowess. He’ll control the action and win the fight by unanimous decision.

Bernard Hopkins W 12 Karo Murat: How can you not pick Bernard Hopkins in this fight? Granted, picking a man of his age in any boxing match is almost a fools errand, and I’ve certainly had my share of embarrassing nights picking the other guy.

But even if Karo Murat may have some physical advantages — emphasis on may — he doesn’t have a quarter of the boxing brain Hopkins does, and that’s what’s important in a fight like this. Hopkins should win a comfortable decision in a dull and sometimes dirty 12-rounder.

Bernard Hopkins W 12 Karo Murat: Karo Murat is an interesting challenge. He fights with energy, mixes it up to the head and body, and doesn’t just fight in one direction. He might be a sort of trap fight for the older Bernard Hopkins, able to steal rounds with work-rate. Will Hopkins let him work though?

The crafty veteran knows more about boxing than most of his youthful current contemporaries will ever learn, and already knew it 15 years ago. Murat has been stopped before, but that was against a Nathan Cleverly, who set a different pace than Hopkins will.

Everyone gets old eventually, and Hopkins losing at any point as he nears 50 is no shock. But Murat doesn’t seem the right man for the job. The old legend is likely to pick up another duke.

I don’t think Karo Murat fits that mold, although he’s a solid, experienced fighter. I think Hopkins will win a competitive but clear unanimous decision. 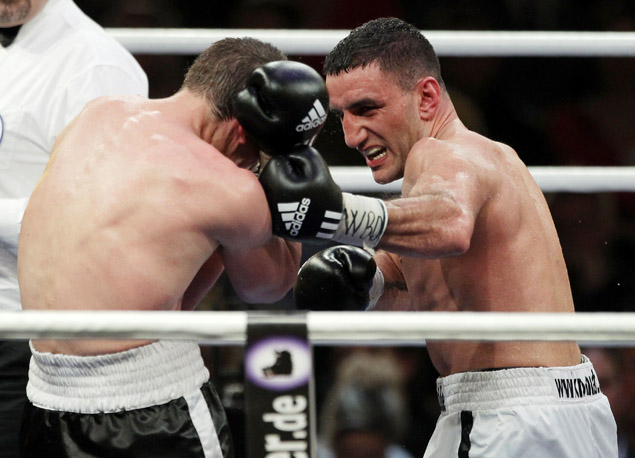 Bernard Hopkins UD12 Karo Murat: Karo Murat is fighting in the United States for the first time and will likely be going back home with his second defeat. He has been in with a few decent fighters but lost to the best fighter he has faced, Nathan Cleverly.

Bernard Hopkins will be looking to defend his 175-pound title again only a year and a half from age 50. I can’t see a scenario where the hand-picked Murat can get out of Brooklyn with a win.

However, he is a decent fighter with some pop so Hopkins have better taken him seriously through training camp. As long as Hopkins’ 48-year-old legs are in shape to go 12 rounds, he should be able to make the far less experienced Murat fight at his pace and win rather easily.

Bernard Hopkins TKO 9 Karo Murat: I expect Bernard Hopkins to be his usual self, even at the age of nearly 49, which is simply the wiliest, smartest, most frustrating, hardest-to-get-at fighter this side of Floyd Mayweather Jr.

Hopkins is a boxing magician who knows every trick in the book, clean and, well, not-so-clean, and will use as much of it as necessary. Hopkins has far more skills in the ring than Murat, who, at 30, is young enough to be B-Hop’s son. If Murat tries to fight him, it might be over sooner.

Bernard Hopkins W 12 Karo Murat: Karo Murat has been the IBF mandatory for 18 months, and had to wait for his chance. Murat is aggressive, and may have a few moments.

But they’ll be few and far between. Murat’s come forward style is made for Bernard Hopkins. I think B-Hop will pick Murat off and old man his way to a wide decision.

Chess match or fireworks? The insiders pick on Alvarado-Provodnikov