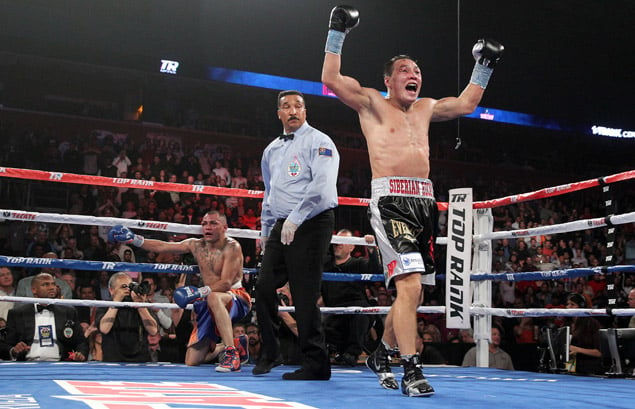 Ruslan Provodnikov made a large jump forward in THE RING’s junior welterweight rankings after his impressive 10th-round stoppage of highly rated Mike Alvarado on Saturday.

There was movement in other divisional rankings due to other significant bouts, fighter inactivity and drug testing policies.

At heavyweight, the once-beaten but unrated Manuel Charr stopped Denis Bahktov in six rounds. Charr has stayed busy since losing to Vitali Klitschko last year but hasn’t done enough to merit a rankings. No changes in the rankings.

At light heavyweight, Erik Skoglund had a solid points win over Lolenga Mock. No change.

At cruiserweight: Guillermo Jones was stripped of his WBA title for taking diuretics prior to his victory over Denis Lebedev, who has been reinstated as WBA beltholder. Jones will be dropped from the ratings, per RING policy, while Lebedev will be moved up to the No. 3 spot, with everyone moving up one spot. Mateusz Masternak moves from No. 10 to No. 9, making room for Thabisco Mchuhu will enter the rankings again at No. 10.

At middleweight, Hassan N’Dam N’Jikam has been inactive since losing to Peter Quillin last October. According to our rules, N’Dam N’Jikam will drop out of our top 10 ratings. Everyone else will move up one spot and Max Burtsak will enter at No.10.

At junior welterweight, Provodnikov stopped Alvarado to win the WBO 140-pound title. Provodnikov will move up to No. 2; dropping Amir Khan to No. 3 and moving Alvarado down to No. 4.

At junior featherweight, Carl Frampton retained his European title with a sixth-round stoppage over Jeremy Parodi. Frampton will move up from No.  3 to No. 2 while former beltholder Jeffrey Mathebula drops to No. 3.

At junior bantamweight, unbeaten prospect Ivan Morales won a 10-round decision over Cesar Javier Gandara. Morales looked good but no ranking yet for him.

At flyweight, Luis Concepcion showed he’s still a threat by stopping Carlos Ruiz in the 10th. No change.

Chuck Giampa is the Chairman THE RING Ratings Committee, He can be emailed at [email protected]