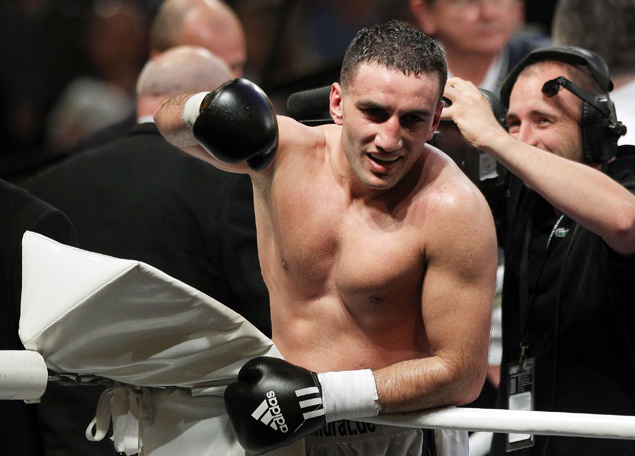 Karo Murat celebrates after winning a minor intercontinental title by outpointing Tommy Karpency over 12 rounds at the Weser-Ems-Halle on May 1, 2010, in Oldenburg, Germany. Murat has gone 3-1-1 since, losing to Nathan Cleverly and fighting Gabriel Campillo to a draw.

The past year and a half have been frustrating for light heavyweight contender Karo Murat. He was installed as the IBF’s No. 1 contender to then-beltholder Tavoris Cloud but kept on the sidelines, unable to fight because his mandatory status would have been revoked.

“I should have fought a lot earlier when Tavoris Cloud was still the IBF champion but he and his handlers did not want to fight me and cashed their way out with a fight against (Bernard) Hopkins,” Murat, a Germany-based Iraqi who recently turned 30, told RingTV.com through Thomas Schlabe of Sauerland Event.

After the will-he-won’t-he saga over the summer when Murat (25-1-1, 15 knockouts) was initially refused a visa, which cancelled his July 13 bout with Hopkins, he now finally has his world title opportunity. He ends his 17-month hiatus when as mandatory challenger he meets the 48-year-old living legend.

“You cannot be that successful at that kind of age he is without the wisdom he possesses,” Murat respectfully said of the challenge in front of him. “However, all good things come to an end, which he will have to realize after Oct. 26.”

Anson Wainwright: This Saturday, you face Bernard Hopkins at Boardwalk Hall in Atlantic City, NJ. What are your thoughts on the fight?

Karo Murat: This is going to be a fight everyone will talk about afterwards. It will be a performance to remember and the people will not talk about Bernard Hopkins’ opponent but about Karo Murat.

AW: Of course, Hopkins is a huge name in boxing. What do you think of him as a boxer?

KM: He has so much experience on his side. You cannot be that successful at that kind of age he is without the wisdom he possesses. However, all good things come to an end, which he will have to realize after Oct. 26.

AW: Originally, you were due to face him in July only for the fight to fall out due to a visa issue. Can you tell us what happened and from your point of view how frustrating that was and if you wondered if you may lose the opportunity to fight Hopkins altogether? 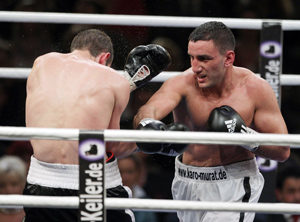 KM: Simply, because the visa wasn’t granted immediately. They asked for a document to be translated into English. The final okay came from the embassy about three days later. In that time Golden Boy had called first date off. I was a bit disappointed but still had faith that everything will be worked out in time. I never felt that I would lose that opportunity because my team as well as Hopkins side worked very professionally to make it happen on a later date and that is what happened.

AW: By fight night it’ll be close to 17 months since your last fight. Why haven’t we seen you in action for so long? What have you done in that time?

KM: Under IBF rules, if I had fought, my mandatory status would have been revoked. I should have fought a lot earlier when Tavoris Cloud was still the IBF champion but he and his handlers did not want to fight me and cashed their way out with a fight against Hopkins. But no matter what, he still lost as he stepped up in competition. In the meantime, I was sparring and sparring a lot. I believe that I am still in my groove and there will not be any ring rust when I fight Hopkins.

AW: So you don’t believe your inactivity will be a problem?

KM: No, as I already told you before. Everyone has a rhythm for what he does in life. The same counts for me as a boxer. I do not need many fights to stay in shape. I am just a gym rat who competes day in and day out. I hustle for a living.

AW: Tell us about your training? What is a typical day? Have you done anything different to prepare for this fight?

KM: I did nothing specifically different in preparation for this fight but finally the words of my coach are getting through. I know now what I have to do to be successful. You will see it in my very next fight that I can pull through my game plan. A normal day in my training regime sees me waking up and playing with my two kids before leaving for the gym. There I have an individual workout in the morning and in the afternoon. Afterwards I enjoy the rest of the day with my family.

AW: You were born in Iraq but now live in Germany. Can you tell us a little of your back story, growing up?

KM: Our family originally has Armenian roots. And to be honest I do not remember too much about that time because I was too young. I kept asking my father about it but he does not like to speak about it too much. I came to Germany when I was 10 years old and at first I did not understand much but I learned the language and quickly found friends. I grew up in Germany so I cannot tell you a lot about (life in Iraq). I started boxing when I was 13. 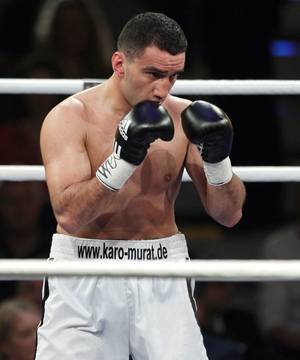 AW: If we can look at THE RING magazine ratings of the top light heavyweights could you share your thoughts on each fighter:

C – Adonis Stevenson – A hard puncher, I got to know him when he sparred Arthur Abraham years ago in Berlin; a fine and respectful person.
1. Bernard Hopkins – My next opponent and a stepping-stone to greatness.
2. Sergey Kovalev – A boxer-puncher; finally gets the respect he deserves. I knew that he would beat Cleverly.
3 – Nathan Cleverly – Got what he deserves.
4 – Chad Dawson – Should retire.
5 – Tavoris Cloud – Cannot compete with the best.
6 – Karo Murat – Soon to be world champion.
7 – Tony Bellew – Will get beat in his next fight.
8 – Isaac Chilemba – Lost to Bellew.
9 – Juergen Braehmer – Showed in 2013 that he still has it; should be world champion in a short time.
10 – Jean Pascal – Very experienced and explosive fighter, injury-bidden but could make again a splash at 175.

AW: The lone loss on your record was when you fought Nathan Cleverly in September 2010. Looking back what would you say of that fight? Was it a surprise for you to see how Cleverly was beaten recently by Sergey Kovalev?

KM: I never was in that fight against Cleverly. I had a blackout (off night) to say the least. Regarding his loss to Kovalev, it did not surprise me at all.

AW: Over the next few months it looks like Adonis Stevenson will fight Tony Bellew and Jean Pascal will meet Lucian Bute. How do you see those two fights going?

KM: I see Stevenson dominating and knocking out Bellew. Pascal as well, as Bute is a good boxer but Pascal is also a fighter and that will be his key to victory against Bute.

AW: What is your life like away from boxing? What are your hobbies and interests?

KM: I enjoy life; travel the world, playing with my kids. I also like gourmet food and I like to test exotic food.

AW: In closing do you have a message for Hopkins and the boxing world in general?

KM: It is going to be hard; it is going to be tough on Oct. 26. He should already make plans away from boxing as I will hurt him and give him his most difficult fight in years. My time has come, his time is over!

Photos / Boris Streubel-Getty Images
Questions and/or comments can be sent to Anson at [email protected]and you can follow him at www.twitter.com/AnsonWainwright