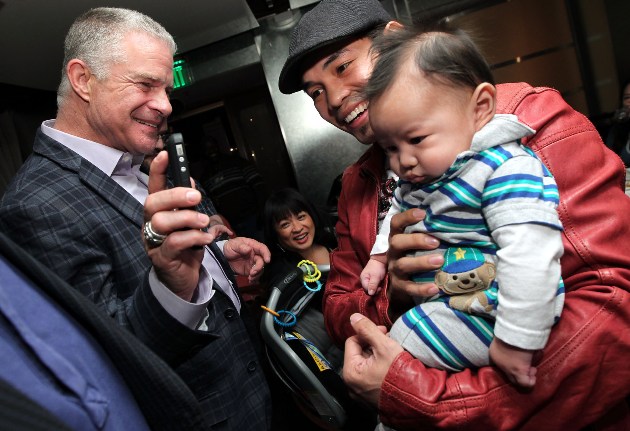 LAS VEGAS — Former RING junior featherweight champion Nonito Donaire spoke to RingTV.com about being a dad as well as having reconciled with his own father, Nonito Donaire Sr., in advance of his Nov. 9 rematch with Vic Darchinyan that will represent Donaire’s featherweight debut.

Donaire (31-2, 20 knockouts) shared his thoughts the day before WBO welterweight beltholder Tim Bradley’s split-decision over Juan Manuel Marquez, on Oct. 12, and the morning after having attended a media dinner hosted by Top Rank CEO Bob Arum along with his wife Rachel Donaire and their nearly three-month old son, Jarel Michael.

In his last fight in April, Donaire, 30, was dethroned as RING 122-pound champion and WBO beltholder by Guillermo Rigondeaux, who also holds the WBA title.

In Darchinyan (39-5-1, 28 KOs), Donaire faces a 37-year-old southpaw who is coming off a fourth-round stoppage win over Javier Gallo in May and who has won two straight since falling in consecutive unanimous decision losses to Anselmo Moreno and Shinsuke Yamanaka.

Darchynian was the unbeaten IBF flyweight titleholder in July of 2007 when Donaire — with Donaire Sr. in his corner at the time — knocked him out in the fifth round.

After losing to Rigondeaux, Donaire had arthroscopic surgery performed on his right shoulder by Dr. Shabi Kahn on April 19, at Seton Medical Center in Daly City, Calif., to repair two tears. Donaire said he planned to resume training with Robert Garcia, in Oxnard, Calif., although he had been working with his father out of a Las Vegas-based venue.

RingTV.com: How was your son’s first public appearance at a boxing event?

Nonito Donaire: Well, we’re proud parents. Everyone was giving compliments to my kid. It felt good that everybody thought he was cute. I was going bring him because I just didn’t want to be away from him.

It was incredible that they were giving him a lot of attention. I barely held him the whole night. It was like this person took him, and then another person took him.

Everybody wanted to carry him. We were really proud parents last night, and everyone was great. We were happy with the way that everything went.

RTV: Were you at all surprised at your son’s even-tempered demeanor?

ND: That’s definitely something that I see in him. He’s very composed, and, like I’ve said, he only cries when he’s hungry or when he needs something, like, getting his diaper changed.

But mainly when he’s hungry or when he’s really, really tired. Even with everybody taking pictures, and taking him here and there, he just stared at everybody and sort of looked at them and tried to learn from them and analyzed them.

Like I said, he’s very composed. Not that he’s going to be a boxer or anything, but let’s see what he does. He focuses really well, so, at this age, he already has that focus and that mental calmness.

It’s the same way when he’s been around my training. He’s just really quiet. It’s like he’s very tuned in and that he understands and he can feel my heart and my soul, giving everything that I’ve got.

It’s like he can feel that, and he just quiets down and just stares at me when I train. I would rather he not be a boxer, but if he does, then I will be a helluva trainer, that’s for sure.

RTV: Can you discuss your reunion with your father in September?

ND: Rachel sort of took it upon herself to contact my dad, like, ‘Hey, we want to talk to you about flying out,’ but she didn’t tell me about it until either the day of or the day before. So, she had already bought the tickets and was like, ‘Your dad is coming tomorrow,’ and stuff like that.

So I was like, ‘Really? Okay.’ I talked to him then, and he saw the baby, and I’ve been telling everybody just how powerful the baby is, because all of the pride from his grandfather, and from me, his father, we just kind of… The weirdest thing about it is that it wasn’t weird that me and my dad could just get along like that.

That was the weirdest thing is that it wasn’t weird. I hadn’t talked to him in so many years, and I thought that it was going to be weird that I just found out the day before, and when he flew in, we picked him up, we had breakfast or lunch.

RTV: When will you be training and where?

ND: Well, we’ve been training in Las Vegas, and we’ve gone back and forth to Oxnard to get in some sparring and work with Robert. But, for now, we’ve been in Las Vegas and pretty much focusing on the fight. We definitely, especially with my dad around, we’ve organized the way that I’ve been fighting.

We’ve been doing things, mentally, in the ring where I’m going back to the basics in boxing. So far, Las Vegas has been the home for my training, but we’ve been going back and forth to Oxnard.

RTV: What role has your father had in your recent training?

ND: Well, for now, he’s my mitts guy. He’s a pad guy. We’ve worked on the pad and on defense and just using distance, just trying to re-memorize some of the muscles that I’ve forgotten to use with my speed.

Because I have just pretty much used power with the last few fights and the last few years, and my distance has been so close. Overall, though, it has been just great to have him around.