Lem’s latest: Rios to be ‘fast, strong’ for ‘scary’ Pacquiao 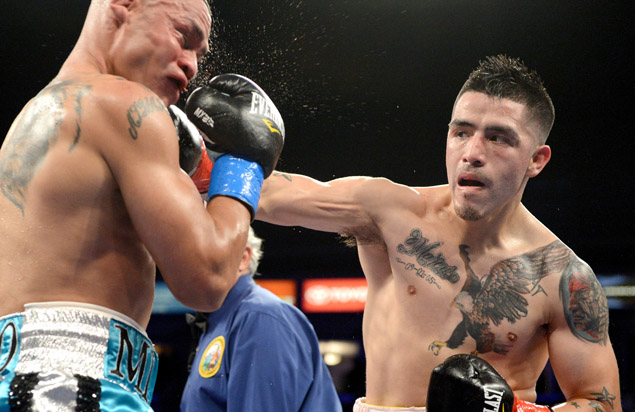 LAS VEGAS — Trainer Robert Garcia said that first-time welterweight Brandon Rios is preparing for the “scary” Manny Pacquiao who won eight titles over as many divisions to show up when the two clash on Nov. 23 in Macau.

Garcia was last in the corner opposite Pacquiao in 2010, when the Filipino superstar earned the WBC’s junior middleweight belt with a bloody and dominant unanimous decision over Antonio Margarito.

Since then, however, Pacquiao has gone 2-2, having lost by split decision to current WBO beltholder Tim Bradley in June 2012, and by sixth-round stoppage to Juan Manuel Marquez last December.

“There’s a lot of things that we’ve seen in Pacquiao’s past three or four fights,” said Garcia, speaking to RingTV.com in Las Vegas, where he watched last Saturday’s split-decision by Bradley over Marquez. “I don’t see the same Pacquiao of five years ago. I know that a lot of people will agree with me, but we still need to prepare for that scary Pacquiao.

“Margarito had to come down in weight, which really, really hurt him, to get to that catchweight. He had gotten destroyed in his previous fight against Shane Mosley. That was a big issue. The age. Brandon’s younger than Margarito, which was three years ago. Since then, Pacquiao has lost to Bradley and gotten knocked out by Marquez. So, those are things that we’ve got to take advantage of.”

Rios, meanwhile was last in the ring as a 140-pounder in March, when Mike Alvarado won a unanimous decision to avenge a seventh-round stoppage loss from last year.

“We don’t like to publicize what’s going on in training, but I’m so impressed,” said Garcia. “Brandon’s been knocking our sparring partners out. He’s doing a good job, looking so strong and so fast, and we’ve still got six weeks before the fight. Brandon’s going to fight at welterweight, so he doesn’t have to kill himself to make weight. He’s strong and he’s walking around 10, 12 pounds over the weight.

The World Cup is an elimination-style tournament across four weight divisions, with 24 fight nights to be broadcast on Fox Sports from venues in the U.S. and Mexico, as well as other international locations.

In other bouts on the Nov. 15 card, featherweights Claudio Marrero and Romulo Koasicha will meet, as will junior featherweight Alexei Collado against an opponent to be determined.

Another featherweight, Albert Bell, will be on the card, and newly-signed welterweight Erickson Lubin, 18, and featherweight Dennis Galarza, 20, will make their pro debuts.

Nigerian slugger Lateef Kayode, who was last in the ring for a cruserweight draw-turned-no-contest against Antonio Tarver in June 2012, has signed with Greg Cohen Promotions and will next fight as a heavyweight, Cohen announced on Tuesday.

A 30-year-old with a mark of 18-0 that includes 14 knockouts, Kayode’s bout with Tarver was negated after his rival tested positive for the banned anabolic steroid drostanolone. Kayode is trained by Freddie Roach.

“Now he no longer has to struggle to make weight and will be coming in as a heavyweight at full power,” said Cohen. “We’re looking forward to putting him into the important fights that will quickly establish him as one of the world’s best big men.”

Meanwhile, Tarver (29-6, 20 KOs) will return from a year-long suspension against West Virginia’s Mike Sheppard on Nov. 26 — five days after Tarver’s 45th birthday. The fight will be shown as part of Golden Boy Live on FOX Sports 1 and FOX Deportes from the BB&T Center in Sunrise, Fla.