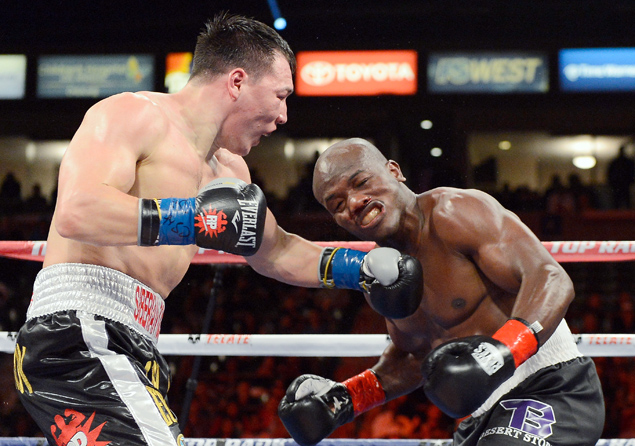 Timothy Bradley (right) takes a hard shot from Ruslan Provodnikov during the fifth round of their brutal welterweight title match on March 16 in Carson, Calif. Bradley retained his WBO belt with a narrow unanimous decision.

The last time we saw Ruslan Provodnikov he looked like he’d been hit by a Mack Truck. His face was heavily marked up, having just given reigning WBO welterweight titleholder Tim Bradley all he could handle for 12 hard rounds.

In the opening two rounds Provodnikov landed several huge shots that had Bradley on the brink of being knocked out. To the American’s credit, he managed to somehow stay on his feet and see his way through the vicious onslaught.

Bradley managed to get his feet under him and boxed on the back foot, picking Provodnikov apart at times, but the Russian was only ever one big punch or two away from turning the action in his favor. Something he did in the sixth round and again in the final stanza when he forced the weary champion to take a knee with the claxon going in the background to signal the final few seconds of the contest.

Despite his steely determination, Provodnikov was to lose a razor-thin unanimous decision by scores of 115-112 and 114-113 (twice). If ever there was a case of the loser enhancing his reputation this was it.

After a few months off, the hard charging Russian, who’s record currently stands at 22-2 with 15 stoppages, was offered a second world title opportunity – this time against WBO 140-pound beltholder Mike Alvarado. “The Siberian Rocky” has fought most of his career at junior welterweight, where he’s won a cache of fringe titles.

The 29 year old will travel into his opponents back yard when he meets Alvarado in a suburb of Denver, Colorado, in what has appears on paper as a can’t-miss all-action war of attrition.

Provodnikov agrees, saying through his manager Vadim Kornilov: “He will fight until the end and so will I and I think this fact makes this a very fan friendly fight.”

Anson Wainwright: What are your thoughts on Alvarado as a fighter? How do you see this fight?

Ruslan Provodnikov: Mike Alvarado is a great fighter and a great warrior. He will fight until the end and so will I and I think this fact makes this a very fan friendly fight.

AW: It takes place (near) his hometown in Denver. Is that a concern?

RP: It doesn’t bother me. I always fought in other fighter’s backyards, and I’m not worried about it.

AW: This fight looks to have the makings of a “fight of the year.” Neither of you are ever in a bad fight?

RP: I think it will be another candidate for fight of the year. I think nobody should miss this one. I’m very excited about this fight.

AW: You fight Alvarado at 140 pounds, but you looked very impressive at 147 against Bradley. What do you feel about having to get back down to 140?

RP: I have no problem with it at all. I looked impressive because I had the best trainers in Freddie Roach and Gavin Macmillan and the best team. I feel great at both 140 and 147.

AW: The last time we saw you, you were involved in one of – if not the – fight of the year with Timothy Bradley back in March. Can you talk us through that fight?

RP: It was a great fight and I think it’s an unfinished one. I hope we can still meet with Tim Bradley for a rematch and finish this fight once and for all. I think that the second one will be even more exciting than the first one. I caught him many times in the first fight, and he showed the heart of a champion and survived through the entire fight. 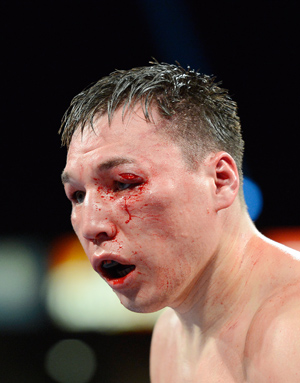 AW: I remember seeing you later back at the hotel after the fight. You’re face was really heavily marked up. Can you tell us about the damage you sustained and how long it took for the swelling and cuts to go?

RP: My face usually gets very puffy and cut up. My skin is very soft, but I felt great after the fight and didn’t feel like I was hurt anywhere in the fight. I heal very quickly, and after about a week most of the damage on my face cleared up.

AW: It was suggested Freddie Roach thought about stopping the fight due to the facial damage you sustained. Could you tell us about the conversation you would have had in your corner as the fight went along and how you convinced your team to let you continue?

RP: Freddie told me he was worried about me and he wanted me to show that I can finish the fight, so I did. I put Bradley down in the 12th…

AW: You are from Beryozovo. It’s a small town in Russia. Could you tell us about your youth growing up there?

RP: The cold weather is not so bad, I actually like the climate in my hometown very much, it’s very clean and there is a lot of nature. I like the peaceful atmosphere in my hometown and I care and want to be there for my people. I have to admit I had a tough childhood and it was tough for me sometimes when I was a kid. I used to fight a lot and get in trouble. Later I realized I could do what I loved to do which is fighting and get rewarded for it instead of being punished for itÔÇª That’s how I took up boxing, and here I am, still fighting since I was a kid.

AW: What do you think of the junior welterweight division?

RP: I think it’s a great division to be in and I’m very lucky to be in this division right now. All the most exciting fighters are in this division and as I always say I will fight the best, and will always satisfy the fans by giving everything I got in every fight.

RP: I enjoy spending time in my hometown with my son and my wife. I enjoy helping my national people in growth and development of sport. I do a lot of campaigning and support for the local sports schools and athletic programs. I want to give back as much to my people as I can. It is very important for me.

AW: Lastly, do you have a message for Alvarado ahead of your fight with him?

RP: Yes, I have a lot of respect for Mike, and I think we kind of became friendly which makes me happy. I just wish him to stay healthy and well and I think we will put up a great show on Oct. 19 and make all our fans very satisfied.