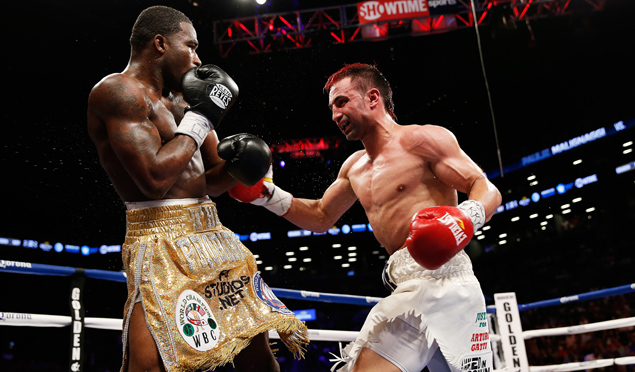 Paulie Malignaggi (right) pursues Adrien Broner during their welterweight title bout at Barclays Center on June 22 in Brooklyn. Malignaggi lost the WBA belt via split decision. He wasn’t happy with members of the media who thought Broner dominated the fight.

Paulie Malignaggi was 45 minutes late for the press conference on Tuesday afternoon to announce his welterweight match against Zab Judah at the Barclays Center in Brooklyn on Dec. 7.

Apparently the large soapbox that Malignaggi was lugging around slowed him down and made him late. Once he was introduced, Malignaggi unloaded on the assembled media, giving them a tongue lashing for everything from improperly scoring his match against Adrien Broner to failing to do enough to clean up the sport.

“I was a little irritated with the media putting the decision in the context of some of those other ridiculous decisions. There isn’t anywhere that I go in this country or anywhere else where someone doesn’t come up to me and say, ‘Paulie you got screwed in that decision.’ I don’t say everybody has to agree, but it’s the kind of fight that could have gone either way.”

Malignaggi lost a split decision to Broner at the Barclays Center on June 22. Many of the ringside reporters had him losing a unanimous decision by a wide margin.

“I’ve had reporters put it in the context of the ridiculous majority decision in Floyd Mayweather and Canelo Alvarez,” Malignaggi said. “I don’t know about you, but I don’t think one person is going up to Canelo Alvarez telling him that he won that fight. I don’t know what kind of bifocals you guys had on when you were watching my fight, but get some bigger ones if you’re going to do this job. If you’re going to do this job at least do it right.”

Malignaggi had the media on the ropes and he wasn’t about to let up. He said five years ago when he complained about performance enhancing drugs in boxing, he felt like he was ridiculed for bringing up a problem.

As a commentator for Showtime Championship Boxing, as well Golden Boy Promotions’ Fox Sports telecasts, Malignaggi is now more a member of the media than he knows. Like the media members he was chiding, Malignaggi has a platform to address the ills of boxing.

“I think he’s a better commentator than a boxer,” Judah said. “He’s a great commentator. But come Dec. 7, I’m the king of this ring.”

It is an intriguing match between two Brooklyn boxers who were outstanding New York City amateurs and as pros won world titles at 140 and 147 pounds. Judah was a three-time New York Golden Gloves winner and finished his amateur career with a record of 110-5. Malignaggi, three years younger than Judah, won the New York Golden Gloves twice.

Malignaggi recalled that Judah worked his corner during the Empire State Games, a New York State amateur boxing tournament, in 1999. He didn’t win the fight, though the NYC team was voted the best in the tournaent. Malignaggi said he was 125 pounds at the time and never thought he’d be facing Judah in the ring as a pro.

“But things happen. It’s been a long road. It’s had ups and downs,” Malignaggi said.

Both men lost their last fights at the Barclays Center, though it appears from Malignaggi’s rant at the press conference that his loss stings more. He said he was contemplating retiring after the Broner loss, but had a change of heart after boxing czar Al Haymon laid out a blueprint for his future in the sport.

Judah, 35, chalks up his loss to Danny Garcia to a slow start. Judah did appear to wake up after getting dropped in the eighth round. He finished strong by winning the last three rounds, but it was too late to make up the deficit from the early rounds.

“We had a fast game plan, but Danny came out a little bit different than I expected,” Judah said. “In Danny’s past fights he’s been known as a slow starter. He came right out the gate and I was like, ‘Whoa.'”

As Malignaggi was climbing down from his soap box at the dais on Tuesday afternoon, he added something that everyone could agree with.

“The Barclays Center was built for fights like this one,” Malignaggi said.