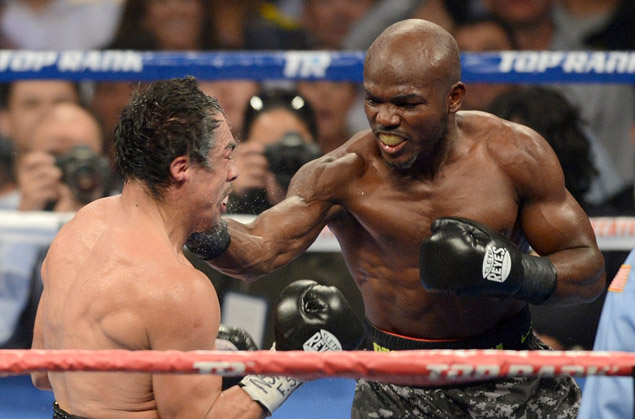 Undefeated two-division titleholder Tim Bradley made a huge jump forward in THE RING’s pound-for-pound rankings with his impressive split-decision victory over future hall of famer Juan Manuel Marquez on Saturday.

Bradley (31-0, 12 knockouts), who won by scores of 116-112, 115-113, 113-115, deserves to advance from his No. 8 spot to No. 3. The 30-year-old Palm Springs, Calif., native is a three-time junior welterweight titleholder who currently holds the WBO welterweight belt. He has defeated nine former or current major titleholders, including Marquez, Manny Pacquiao, Devon Alexander, Lamont Peterson, Kendall Holt and Miguel Vazquez.

The new RING magazine pound-for-pound top 10 is as follows:

At welterweight, Bradley retained his WBO title outpointing Marquez, causing the following changes in the ratings: No 1. Bradley; No. 2. Marquez; No. 3 Pacquiao; No. 4 Kell Brook; No. 5 Alexander; No. 6 Robert Guerrero; No. 7 Adrien Broner; No. 8 Keith Thurman; No. 9 Paul Malignaggi; No. 10 Marcos Maidana.

Jesse Vargas won a hard-fought decision over Ray Narh, who suffered a knockdown in the 10th and final round. No ranking for either.

At bantamweight, No. 8-rated Julio Ceja stopped Juan Jose Montes in three, bouncing back from his career first loss to Jamie McDonnell. No change.

At flyweight, Juan Carlos Reveco won a technical decision over Ricardo Nunez to retain his WBA “regular” title. [Editor’s note: THE RING recognizes WBA/WBO flyweight beltholder Juan Estrada as the WBA’s 112-pound titleholder, not Reveco.]  Reveco will change places in the ratings with Milan Melindo, moving Reveco moving to No. 7 and Melindo dropping to No. 8.

Chuck Giampa, the Chairman of THE RING Ratings Committee, can be emailed at
[email protected]