Malignaggi goes from student to rival for Judah 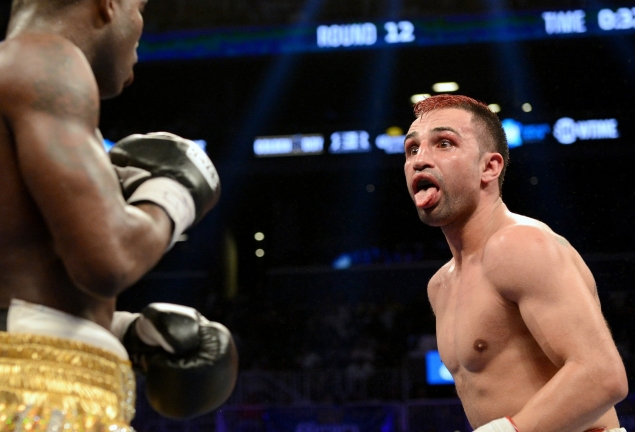 LAS VEGAS — Not only was Zab Judah someone who fellow Brooklyn native Paulie Malignaggi looked up to as an amateur boxer, but the 18-0 pro even worked the corner for a teenaged Malignaggi in 1999.

“I still have all of my amateur fights on VHS, and I haven’t converted them to DVDs. So somewhere in my archives is an old VHS tape that is a video of a fight where Zab worked my corner at the old Empire State Games. I was 18, and it was the summer of 1999. Zab was a former New York amateur product who had just won a title, and we were doing the Empire State Games, which is the Olympics of New York,” said Malignaggi.

“Zab came on as sort of an honorary team coach. I remember Zab working my corner, and that just goes to show you the level of respect that I had for him. Zab was only a few years older because he was a young champion, but there was this guy who was on the national stage taking some time out of his life to kind of work the corner of the younger fighters. All of us kids looked up to him.”

But soon Malignaggi will be looking across at Judah as an opponent when the two former titleholders meet at Barclays Center in Brooklyn on Dec. 7.

The pair will attend a Tuesday press conference at Barclays Center to officially announce the event.

While employed as a commentator for England’s Sky Sports, Malignaggi spoke to RingTV.com at ringside before Saturday night’s split-decision victory by Tim Bradley over Juan Manuel Marquez in Las Vegas.

“It just goes to show you how far back my respect goes with Zab, and now it comes full circle to where he is and has been, and where I am and have been. I just think that it’s going to be an old school, Brooklyn turf war where guys used to come up in their neighborhood, and you’ll see who the ruler is,” said Malignaggi.

“Me and Zab both being from Brooklyn, people have been kind of saying that we should fight. Maybe it’s not on the way up, but we’ve both achieved plenty of notoriety to make this fight a very big fight. Probably the biggest fight between any New York fighters that could have been made in the past decade.”

Judah (42-8, 29 knockouts), who turns 36 on Oct. 27, was last in the ring for a spirited unanimous decision loss to RING junior welterweight champion Danny Garcia.

Malignaggi (32-5, 7 KOs), 32, is coming off June’s split-decision loss to Adrien Broner, who dethroned him as WBA 147-pound titleholder.

“I’m probably never going to be able to find that video,” said Malignaggi. “It’s funny, though, because I lost that fight.”