Bradley outpoints Marquez by split – but not controversial – decision 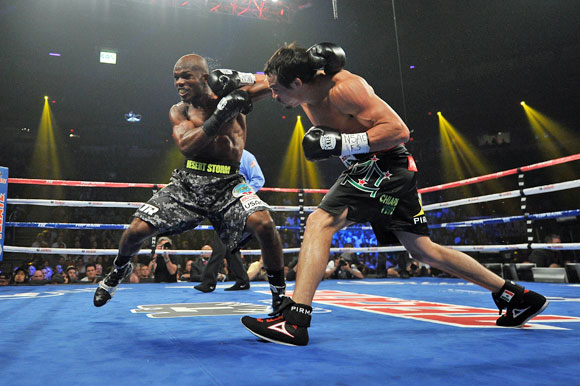 The undefeated two-division titleholder added another boxing legend to his resume with his points victory over Juan Manuel Marquez on Saturday, but he once again had to sweat out a split decision that wasn’t well received by the 13,111 fans who witnessed it at Thomas & Mack Center.

However, those who booed the decision were mostly Marquez fans. Unlike his split nod over Manny Pacquiao last June, most of the boxing public agreed with the official verdict.

The defending WBO welterweight titleholder was the busier fighter – especially with his jab – and he landed accurate power shots while neutralizing many of Marquez’s hard counter punches with lateral movement. Bradley didn’t play it safe, however. He followed up whenever he stunned Marquez, but controlled his aggression for most of the brisk 12-round bout.

“That win was my ticket to the Boxing Hall of Fame,” Bradley said. “I beat a great champion. Everything worked. My jab (landed) over and over. He couldn’t touch me. There were a lot of missed punches on both sides. They may not appreciate it, but I fight for the fans.” 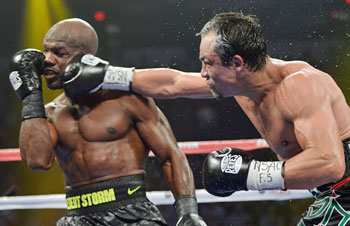 The fans appreciated Bradley (31-0, 12 knockouts); they just had more appreciation for Marquez. And why not? The 40-year-old veteran fought with the fire of a hungry young up-and-comer, stalking his stick-and-moving opponent for much of the bout.

The crowd roared its appreciation whenever the Mexican hero got Bradley on the ropes and let his hands go – even when those shots missed or were blocked – which might explain Glenn Feldman’s 115-113 card for Marquez.

Marquez (55-7-1, 40 knockouts) — who stood his ground in the early rounds, forced most of the crowd-pleasing exchanges and was on the hunt down the stretch of the bout — thought he did enough to become the first Mexican fighter to win major titles in five weight classes.

“I came to win and I felt that I did win,” Marquez said. “The judges took it away from me. You don’t have to knock the other guy out to win a fight. I did my job and I won. I don’t know what’s next. I’ve been robbed six times in my career.”

Marquez has been on the wrong side of a few controversial decisions, but this fight wasn’t one of them.

It was a competitive fight, but Bradley was in clear control of the majority of rounds. The younger man was just a bit quicker, a little more nimble and busier in two out of three punch categories, according to CompuBox. Bradley landed 168 punches to Marquez’s 153. And his jab was a dominant punch, as he landed 82 to Marquez’s 38. However, Marquez landed 115 power punches to Bradley’s 86.

Bradley’s trainer Joel Diaz was pleased with his fighter, who went life and death against Ruslan Provodnikov in their brutal fight-of-the-year candidate in March. Bradley came out guns blazing against the Russian puncher and was almost whacked out in the early rounds because of it. He didn’t start listening to Diaz until the middle rounds, when his boxing allowed him to assume control of the fight. Still, Bradley was dropped in the 12th round and had to sweat out a close unanimous decision.

Diaz was confident going into the Marquez fight but he was concerned about what would happen if Bradley let his machismo get the better of him against the celebrated counter puncher, who was coming off an all-time great highlight reel KO of Pacquiao.

Most fans and members of the media who picked Marquez to beat Bradley did so thinking the American was either damaged goods after the Provodnikov fight or would forget his game plan the moment he was hit with a good punch.

Both were likely scenarios, but Bradley proved that he still has a lot of fight left and that he can stick with a smart strategy against a future hall of famer.

“The game plan was not to be reckless,” Diaz said. “Twice during the fight in the corner I told Tim to knock it off and not get into too many exchanges.”

Bradley listened but still took enough risks to make the fight interesting. He loaded up and swung wild with some of his power shots, most of which missed the mark. He mugged after making Marquez miss at the end of the fifth round. He tried to jump on Marquez after stunning him midway through the 10th, and he exchanged hard shots in the final seconds of the last round, which resulted in the proud old warrior being rocked back on his heels.

It was good boxing and good action in spots. It wasn’t enough to win over the pro-Marquez crowd on fight night, but it was probably enough to make most fight fans finally move on from Bradley’s controversial decision over Pacquiao.

And it was a step in the right direction for Bradley, who will be an interested observer of the Pacquiao-Brandon Rios fight next month. If Pacquiao beats Rios, a rematch with Bradley is very possible.

If Rios springs the upset, a Bradley-Rios showdown would be well received by most of the boxing public.

And if a Rios fight is made, who knows? Maybe the blood thirsty ghouls will get lucky and Bradley will forget to listen to Diaz again.