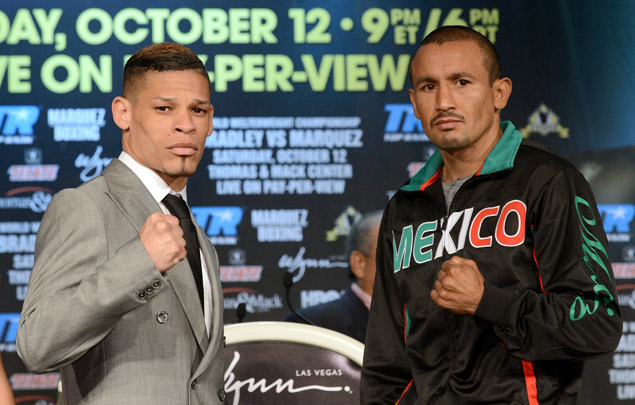 RingTV.com has live, round-by-round updates on this page for tonight’s featherweight title bout during which een Puerto Rican contender Orlando Cruz, who was attempting to become the first openly gay boxer to win a major belt, was knocked out in the seventh round by former two-time titleholder Orlando Salido at Thomas & Mack Center.

Orlando Cruz is in the ring. He was roundly booed both during entry and introductions. Orlando Salido’s in, and he’s loudly supported as the more favored of the two.

Round 1: Cruz iis wearing rainbow colored trunks. Jab and hook by Cruz early, out of his southpaw stance. Right to the body from Salido, who is not rushing in. Jab and shuffle by Cruz. Cruz appears to be the more active of the two, landing a left, right and a left uppercut with movement. Salido drives three blows to the body and is warned for straying low by referee Kenny Bayless. Cruz, 10-9.

Round 2: Cruz continues to move and deliver from a distance, decent jab and right hand by Cruz. Salido is warned, yet again, for straying low, yet lands two more times the same way. A right and a left by Salido cause Cruz to clinch. Salido pounds three times to the body, and has the crowd chanting his name. Nice left by Cruz, who takes a right and a left. Salido closes the distance and lands once to the head and body prior to the bell. Salido, 10-9; Even, 19-19.

Round 3: Can Cruz keep Salido off of him? That seems to be the question. Cruz feels a hard right by Hard right by Salido, who has begun to press. Another good right by Salido. Cruz’s punches seem to have little effect. Salido drives hard to the body and nails Cruz with a hard right, followed by another. Lead right and left to the body by Salido. Salido’s body work appears to open up Cruz’s head. Salido wins the exchange prior to the bell, concentrating on the body. Salido, 10-9; Salido, 29-28.

Round 4: Salido’s fires about eight shots with both hands, nailing Cruz at least twice to the head. Salido pours it on along the ropes, and Cruz tries to hole him off in vain. Right to the body and two more to the head amid at least four shots all land for Salido. Two more hard right hands to the head for Salido, who batters Cruz backward. Crowd chants, “Mexico,” for Salido, who absorbs a left and a right prior to the bell from Cruz. Salido, 10-9; Salid, 39-37.

Round 5:
Round 5: Salido’s face is displaying some damage, as is Cruz, who has taken the most. They trade lefts, but Salido lands two more rights. Cruz appears to have gained a second wind. Cruz trades inside with Salido, then moves away after a hard shot to the body by Salido. Triple-jab and a right hook back up Salido, and Cruz controls the remainder behind his jab, all the while, standing his ground. Cruz, 10-9; Salido, 48-47.

Round 6: :.Cruz gets off early behind his jab and a mixture of shots to the body. Hard right by Salido, but Cruz goes back to boxing and escapes harm. Salido gets Cruz on the ropes three separate times and blast away at the body. Right, left, right by Salido, then another head-swiveling right all land on Cruz. Decent left by Cruz, but Salido closes strong to the body to win the round, solidly. Salido, 10-9; Salido, 58-56.

Round 7: Cruz enjoys an early lead behind his jab in the round before Salido pounds to the body and then STOPS CRUZ WITH A RIGHT TO HEAD THAT STARTS CRUZ’S DESCENT, AND A LEFT UPPERCUT TO HEAD ALSO. CRUZ IS DOWN, CRUMPLED, AND NOT GETTTING UP!!! SALIDO RUNS AROUND THE RING IN CELEBRATION. FIGHT’S OVER AT 1:05 OF THE SEVENTH.