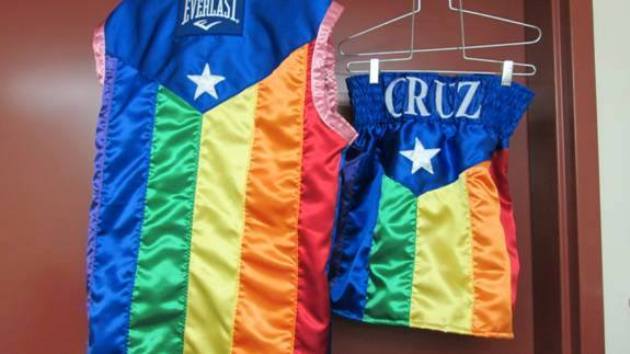 Puerto Rican featherweight contender Orlando Cruz, who declared himself “a proud gay man” last October, has apparently angered some of his countryman with the the wardrobe he intends to wear into the ring for Saturday night’s bout with veteran Orlando Salido for the WBO’s vacant belt at Thomas & Mack Center.

Comprised of a sleeveless shirt and matching trunks, the outfit is modeled after the Puerto Rican flag’s red, white and blue stripes, but with the rainbow addition of separating green, yellow and orange patterns on the back meant to represent Cruz’s support of the lesbian, gay, bisexual and transgender (LBGT) social movement community.

A photo of uniform, supplied by Everlast, was posted on the Spanish Face Book website of Top Rank, where it was the recpient of some disparaging comments from fans who believe that Cruz defaced the Puerto Rican flag.

Cruz still plans to wear the uniform in part to honor of the late Emile Griffith, a former welterweight and middleweight champion whose own sexuality had come to represent a major part of his legacy.

HBO boxing commentator Jim Lampley called Cruz “a hero of mine” during an interview with RingTV.com while speaking about Griffiith, who died in July.

Lampley revealed that his older half-brother, Fred Trickey, “came out of the closet at the age of 14 in 1959.” Trickey, whom Lampley called “one of the bravest people I’ve ever met” died four years ago from an HIV-related illness at age 65.

Lampley’s support for Cruz surfaced in the wake of the boxer’s having announced his engagement to his partner, Jose Manuel.

Having last been in the ring for a sixth-round stoppage of Aalan Martinez in March, Cruz (20-2-1, 10 knockouts) declared his sexual orientation prior to his unanimous decision over Jorge Pazos last October. It was his third consecutive victory since being stopped in consecutive losses to Cornelius Lock and Daniel Ponce de Leon.

Football’s Robbie Rogers and basketball’s Jason Collins have also admitted they are gay.

A 32-year-old who represented his country in the 2000 Olympics, Cruz will face Salido (39-12-2, 27 KOs) in a bout that will happen as part of the Tim Bradley–Juan Manuel Marquez card on HBO Pay Per View.