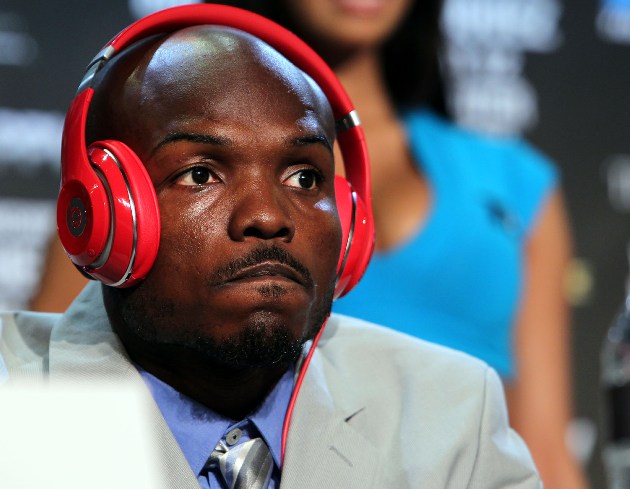 LAS VEGAS — While wearing large, red head phones during most of Wednesday’s final press conference at The Wynn Hotel’s Encore Theater for his WBO welterweight title defense against Juan Manuel Marquez at The Thomas & Mack Center on Saturday, Tim Bradley mostly bobbed his head and tuned out to the speakers, including Top Rank CEO, Bob Arum.

That is, until Marquez stepped up to the podium. At that point, the four-division titlewinner had Bradley’s complete focus.

“I was listening to Sirius FM because I wanted to listen to my music. I didn’t want to get distracted,” said Bradley, a 30-year-old with a mark of 30-0 that includes 12 knockouts. “But when I saw Marquez get up to speak, I took the head phones off to listen to Marquez, because I respect him. I definitely wanted to show him his respect.”

Bradley will be paying similar attention to Marquez in regard to the punching power of the Mexican star, who was last in the ring for December’s sixth-round knockout of Manny Pacquiao, whom Bradley dethroned as titleholder by disputed split-decision in June.

When Marquez did speak, he gave Bradley something to think about should he consider the aging master past his prime.

“Everybody knows me. I don’t like talking outside of the ring. I will talk with my fists in the ring on Saturday, and I feel that I’m ready,” said Marquez, who turned 40 in August. “Everybody tells me, ‘How do you feel? And you’re 40 years old.’ I feel very happy. I feel great, like a young fighter with a warrior’s heart.” 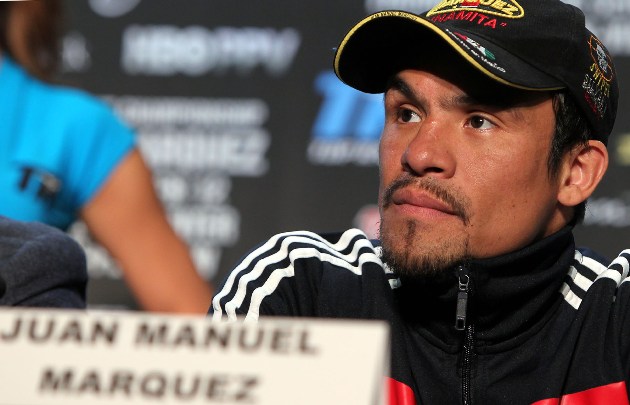 Still smarting from the criticism he took for the way he fought Pacquiao, Bradley waged a toe-to-toe war of a attrition with Ruslan Provodnikov, against whom he had to rise from a 12th-round knockdown to escape with a unanimous decision in March.

“After the Pacquiao fight, nobody gave me respect… I had to earn their respect. The fans are the ones who pay the bills, man. So I definitely had to earn their respect. I think that’s the reason that I went out there and I fought the way that I fought. I stood there. Ruslan Provodnikov is a big puncher, man, but I wanted to take him out. I wanted to make a statement across the world,” said Bradley.

“I felt that I did that in that fight because of the type of punishment that I took in that fight. Boxing fans are looking for entertainment. They really don’t know about your personal life. It’s more about entertainment with them. They want to see a good fight. I gave them a good fight in the last fight. So they expect me to put on a good show for this fight as well.”

Bradley promised manger, Cameron Dunkin, however, that he would return to the use of his varied boxing skills against the counter-punching Marquez (55-6-1, 40 KOs).

There were little signs of animosity between the two fighters either as they posed, side-by-side, for photos or  during the post-conference staredown, which lasted scarcely 30 seconds. 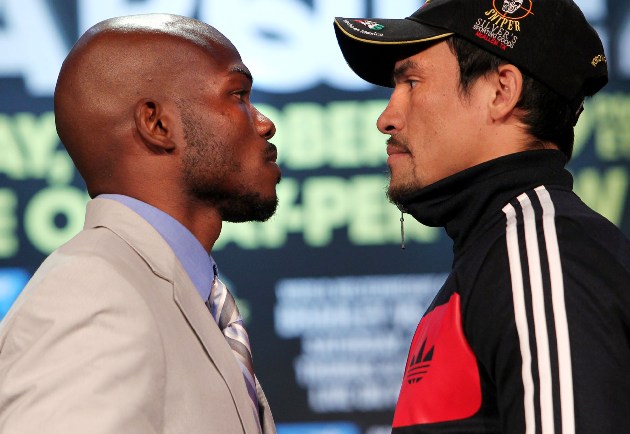 Marquez will pocket a guaranteed $6 million compared to $4.1 million for Bradley for their HBO Pay Per View bout, according to figures provided by Keith Kizer, executive director of the Nevada State Atletic Commission.

Marquez represents a shot at yet another future Hall of Famer, Bradley. Meanwhile, Bradley, and his title belt, could make Marquez the first Mexican fighter to win five belts over as many divisions.

“Julio is the greatest fighter in Mexican history. He’s my idol. He’s everyone’s idol. We want history. His story is done, and now, I’m finishing my story,” said Marquez.

“Just thinking about what he was able to do to everyone, I don’t think I would want to fight him. He was very strong, with a lot of combinations. There was something very special about him that you don’t see in the ring every day.”

Marquez admitted nearly considering retirement after vanquishing Pacquiao, against whom he is 1-2-1.

“After that fight [with Pacquiao,] you know, my family thought I was done. It was over. But in my mind, I wasn’t done yet. But they were. They thought it was over,” said Marquez, who is married with children. “But I talked it over with them. I wanted one more, and I feel great. I’ve trained well. I love this. I’ll keep working hard. I know that there are like four more fights.”

Marquez said that none of those fights is going to be against Pacquiao.