Martinez gains an audience with the Pope 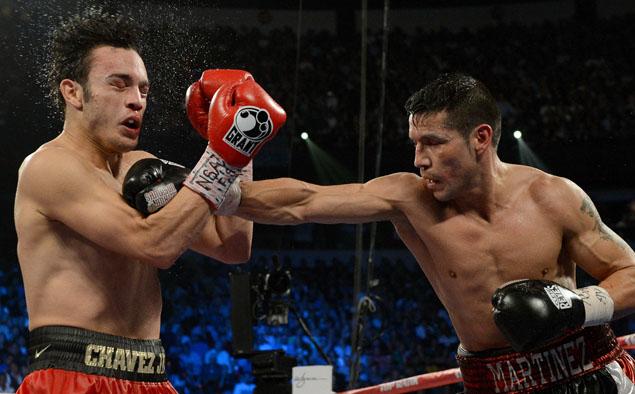 RING and WBC middleweight champion Sergio Martinez will meet fellow Argentine Pope Francis at the Vatican next Wednesday, marking the first time since Muhammad Ali that a boxer has met The Pope, according to a press release from Martinez’s promoter Lou DiBella.

“In the past couple of months, I will have had two of my dreams as a Catholic come true, to visit the Basilica of our Lady Guadalupe in Mexico and to be received by the Pope,” said Martinez, who intends to speak about his anti-bullying and domestic violence against women campaigns. “I will be asking the Pope for blessings and spiritual protection to all of those who enter the ring.”

Martinez will be presenting the Pope with a special edition WBC green belt, with a picture of Pope Francis as well as the flag of the Vatican.

“Sergio Martinez continues to make history in our sport by having this historic meeting with Pope Francis,” said Martinez’s advisor, Sampson Lewkowicz. “I’m very happy for Sergio, because as the great champion and great person that he is, he has earned this tremendous opportunity and honor of having this meeting.”

A 38-year-old southpaw, Martinez (51-2-2, 28 knockouts) had to rise from the canvas during each of his past two unanimous decision victories over Julio Cesar Chavez Jr. and Martin Murray in September and April, respectively, while also having suffered injuries as a result of those bouts.

Martinez will be accompanied to the meeting by longtime business manager Miguel De Pablos and Victor Gonzales, who was instrumental in the organization and staging of Martinez’s last middleweight title defense against Murray in front of 50,000 Argentines.

“In his short time as leader of the Catholic Church, this gentle Pope from Argentina has already changed the dialogue of his people,” said DiBella. “I am thrilled that Sergio will have a private audience with Pope Francis and that he will be able to discuss his campaigns against bullying and domestic violence.”

After the Chavez fight, during which he won the WBC’s belt, Martinez received eight stitches to repair a cut over his left eye, two staples in his head, and suffered from both a broken left hand and torn ligaments in his right knee, the latter of which required surgery to repair.

Martinez required a second surgery after having damaged the knee injury, later determined to be a torn right meniscus, during his triumph over Murray.