Will Bradley choose fight or flight against Marquez? 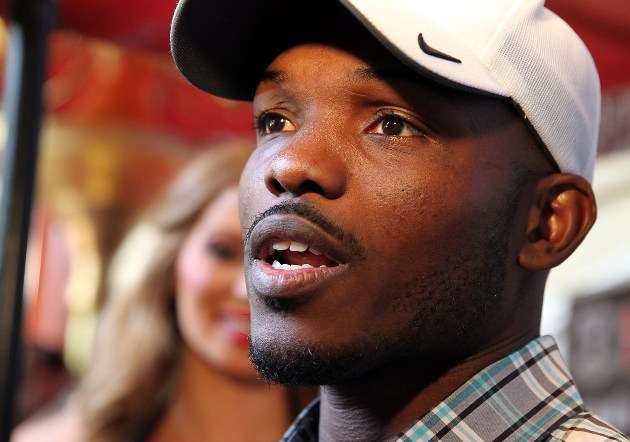 LAS VEGAS — At times on Tuesday, WBO welterweight beltholder Tim Bradley vowed that he would “stay smart” during Saturday’s title defense against Juan Manuel Marquez at Thomas & Mack Center on HBO Pay Per View. Then, there were other times when the unbeaten 30-year-old veteran smiled that Chesire Cat grin and simply said, “I don’t know.”

Bradley (30-0, 12 knockouts) fought somewhat recklessly in March, when he had to rise from a 12th-round knockdown to secure a unanimous decision over Ruslan Provodnikov in defense of the belt he won by disputed split-decision over Manny Pacquiao in June.

“I can’t go in there and get gungho and go out there on my own and think that this guy is nothing,” said Bradley. “Because this guy can freakin’ fight, man. This guy is the best opponent that I’ve ever faced in my whole career.”

Bradley could do well to emulate past skill-based fighters who have beaten Marquez, such as Freddie Norwood, Chris John and Floyd Mayweather Jr., winners by unanimous decision over the Mexican superstar.

But if the crowd boos Bradley’s strategy, what then?

MARQUEZ IS ‘BETTER’ THAN PACQUIAO

Bradley defended his stance that Marquez will be the best opponent he will have ever faced, owing to his stoppage of Pacquiao.

“The fact that he knocked out Pacquiao and the fact that he had three other controversial fights with Pacquiao makes him better. That right there alone tells you how smart this guy is. He’s very intelligent, man. He knows every aspect of the ring. So I can’t go in there and promise you the world that it’s going to be a barn burner or that it’s going to be like the Ruslan fight,” said Bradley.

Reminded of the fact that Mayweather dominated Marquez, Bradley amended his words.

“Well, he’s not the wizard. Floyd is the wizard,” said Bradley. “But what’s below the wizard? Apprentice.”

Bradley also dethroned Kendall Holt by unanimous decision for the WBO’s 140-pound belt in April of 2009, rising from two knockdowns to do so, and owns a unanimous decision in July of 2007 over current IBF lightweight titleholder Miguel Vazquez, whose other losses were by split- and unanimous decision to former RING junior middleweight champion Canelo Alvarez.

Concerning Marquez’s age, Bradley referenced IBF light heavweight titleholder Bernard Hopkins, who, at 48, scored a unanimous decision over Tavoris Cloud in March, extending his own record as the oldest man to win a significant crown. Hopkins first set the record at the age of 46 in May of last year by outpointing Jean Pascal for the WBC’s 175-pound belt.

“Bernard Hopkins freakin’ beat the crap out of a kid the other night or a couple of months back. Bernard Hopkins is 49 years old and almost 50. I am younger,” said Bradley. “There’s no damn way that he should be able to hang with me, man. Especially not in the conditioning department. I’m 30. I’m 10 years younger.” 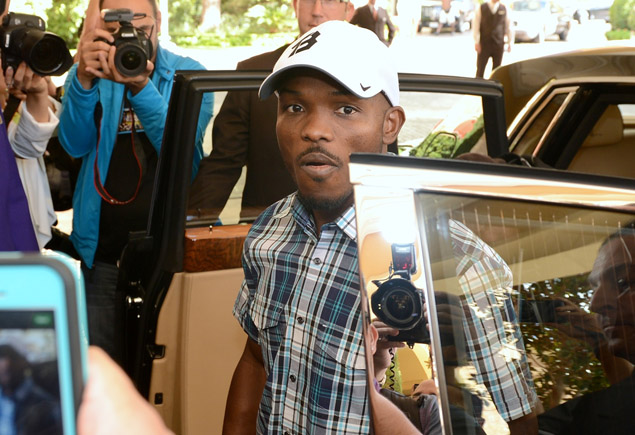 CHAMPIONS SHOULD BE ‘TESTED YEAR ROUND’

Bradley and Marquez are undergoing random drug testing by the Nevada State Athletic Commission, a development set up by Top Rank CEO Bob Arum and NSAC executive director, Keith Kizer, according to a report by Yahoo!Sports.

“Nevada’s definitely doing the right step… I don’t think promoters want to get involved because if a boxer tests positive, then it kills the whole fight… So it’s a double-edged sword at the end of the day, but the fact that Nevada got involved, I have to respect that, because they’re actually trying to change something and do something different… No other commission in boxing has done this,” said Bradley.

Although Bradley had initially desired the testing to take place through the combined efforts of The United States Anti-Doping Agency (USADA) and The Voluntary Anti-Doping Association (VADA), that did not happen, in part, due to Marquez’s association with conditioning guru Angel Guillermo Heredia Hernandez, whose history includes being involved in performance-enhancing activities.

Heredia has an adversarial relationship with former BALCO founder Victor Conte, who works with VADA.

Bradley contended, however, that Marquez stated that he would agree to the USADA/VADA testing when asked by HBO’s Max Kellerman during their filming of HBO’s Face Off With Max Kellerman, but that scene was cut.

“Check this out, I said, this is what I’ll do. I will do your testing, and I’ll do VADA testing. How about you do both testing? Nobody has seen this, but on HBO, on the Face Off, he agreed to doing the damn two tests. He agreed, but they didn’t put that in. They didn’t put that out there. Hell yeah, they cut it out. Damn right they cut it out. But he agreed to do both tests because Max put him on the spot,” said Bradley.

“He’s like, ‘Well, if Tim agrees to do both tests to satisfy you guys, are you willing to do it too?’ [Marquez] said, said ‘Yes.’ Then, a few weeks later, he reneged on all of the testing. Then, that’s when the commssion got involved, and that’s when they got involved to save this fight. This s–t is suspicious to me. I don’t give a damn what anybody say. I’m not saying he’s on anything, because I’ll be legally sued or whatever, but it’s too damn suspicious.”

So badly concussed from his fight with Provodnikov was Bradley that he suffered from headaches and slurred speech for weeks afterward and required medical examinations from neurologists, the fighter said.

On Tuesday, Bradley spoke freely about his recovery process, owing to his desire to shed light on the dangers of being a professional boxer.

“The point is that a lot of fighters probably go through what I went through after certain fights. I’m here to tell them that, basically, there’s help out there. You can get help. I got the help out there, and I’m basically here to just speak out,” said Bradley.

“A lot of people feel that I shouldn’t speak out about it. That I should keep it a secret. But for some reason, I want to talk about it, you know. Because I went through it. I want to share it with the world to let them know that it is true about boxing. It is a dangerous sport. When you come into a fight, you might not leave the same way.”

Asked if he wanted to be an advocate for safety in boxing, Bradley said, “absolutely.” Bradley said that his future plans include participating in procedures conducted by organizations such as the Cleveland Clinic’s Lou Ruvo Center for Brain Health, which has engaged in comprehensive brain imaging of professional boxers.

“I want to help these fighters and just let them know that there is help out there, and that I received help,” said Bradley. “I’m 100 percent better than in the Ruslan fight, mentally. My mental clarity is there. I’m very focused, very determined, and on top of that, my training went very well for this fight.”

Bradley blamed extreme weight loss, in part, for his performance against Provodnikov.

“There were a lot of factors that made me fight that way. There was dehydration. A lot of fighters have to realize that the more dehydrated you are, the more susceptible you are to getting concussed, or, also, getting rocked in a fight. There’s less water on the brain and you can get rocked. You don’t have a chin when you’re dehydrated. Most fighters, when they go into a fight, they’re dehydrated, and that’s why bad things happen to them, mentally, physically,” said Bradley.

“So, with that being said, I was two weeks away from the fight, and I was still weighing heavy. I was at about 162 two weeks away from the fight. I was struggling to make the weight. It was almost at, like, the last minute that this Ruslan fight came about. We finally signed the contract when it was like eight weeks out from the fight. I was weighing very high, going into camp, and I had to lose massive amounts of weight. It was hard. I’m going to tell you, it was extremely hard.” 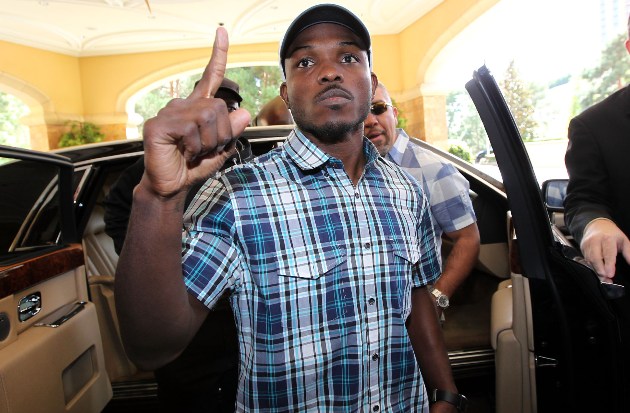 IN DEFENSE OF C.J. ROSS

Bradley defended judge C.J. Ross, who has taken a leave of absence in the wake of having scored 114-114 in last month’s majority decision by Mayweather over Canelo Alvarez. Ross was among two judges — the other being Duane Ford — who scored 115-113 for Bradley over Pacquiao.

Bradley also expressed his belief that Mayweather-Alvarez was a closer fight than it appeared to some.

“There were some close rounds in the Mayweather fight. A lot of people gave him credit for his defense. But the kid was hitting him with some shots, right here in the body. Clearly,” said Bradley.

“Jabs here. Right hands here. He was busier in some rounds. There were some close rounds. Maybe those were the rounds where she decided to go with him instead of with Mayweather, because everybody gives Mayweather a lot of credit for his defense.”

Bradley-Marquez will be refereed by Robert Byrd and judged by Robert Hoyle, Patricia Morse Jarman and Glenn Feldman. Byrd refereed Bradley’s victory over Pacquiao, as well as Marquez’s seventh-round stoppage of Manuel Medina in for the IBF’s 126-pound belt in February of 2003.

Hoyle’s card read 114-114 in Marquez’s majority decision loss to Pacquiao in November of 2011, and he had Marquez ahead, 77-74, when the Mexican fighter rose from a third-round knockdown to stop Michael Katsidis in the ninth round in November of 2010.

WHAT ABOUT FIGHTING MAYWEATHER OR COTTO?

In victory over Marquez, would Bradley like a shot at Mayweather?

“I really don’t even think about it. I would love to fight Mayweather, damn right, because he’s the best in the world. I would love to fight him,” said Bradley. “But right now, I’m just thinking about Marquez, man. Marquez is the only thing that’s on my mind. Taking care of Marquez. After that, we can sit down and talk about it, but I don’t know.”

How about a junior middleweight bout against Miguel Cotto, who is coming off last weekend’s third-round stoppage of Delvin Rodriguez?

“I ain’t getting in there with no Cotto, man. After last week, I was like, ‘Lord.’ I said, ‘damn, Cotto walked straight through that dude.’ I thought he was going to knock him out, but Cotto looked phenomenal,” said Bradley, later saying that he would “fight anybody,” including Cotto.