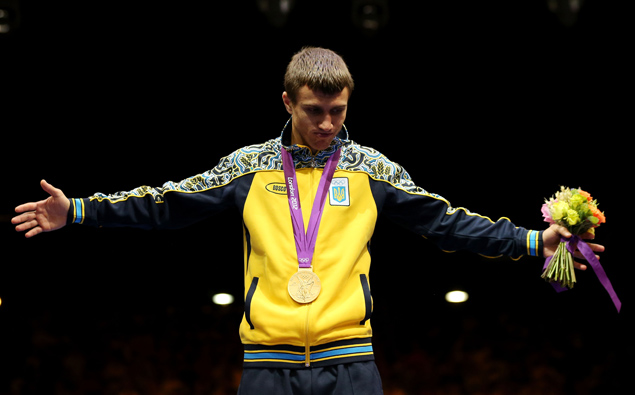 Gold medalist Vasyl Lomachenko of Ukraine celebrates on the podium during the medal ceremony for the men’s lightweight (60 kg) final bout on day 16 of the London 2012 Olympic Games on Aug. 12, 2012 in London, England

For several years boxing fans the world over had been asking when amateur phenom Vasyl Lomachenko would turn pro. He’s won back-to-back Olympic gold medals, as well as world amateur championships and countless other accolades, including the Val Barker Trophy (for most outstanding boxer in the Olypic Games). Though still only 25, one wondered if the Ukrainian boxer would ever make that leap into the paid ranks.

He finally decided to embark on the pro game this past summer. He took a trip to America with his father Anatoly where he was met by Egis Klimas, who manages several pros including current WBO light heavyweight titlist Sergei Kovalev and IBF featherweight beltholder Evgeny Gradovich. Lomachenko visited the offices of Top Rank, Golden Boy Promotions and several other promoters before eventually arriving at the decision to team up with Las Vegas-based Top Rank.

“I decided the time just got for me to turn pro,” he said, before adding that he decided Top Rank was the best fit for him simply they “offered the best deal for me.” 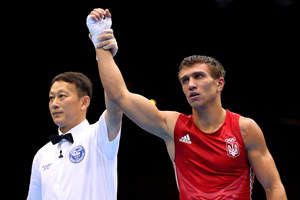 Even though he only left the amateur game, in which he apparently sported an eye popping 396-1 record (that’s correct, the single loss coming in the 2007 world championships final against Albert Selimov, which he’s twice avenged), he says he wanted a quick start in the pros. He makes his highly anticipated debut on the undercard of the Timothy Bradley-Juan Manuel Marquez in a scheduled 10-round bout against Jose Ramirez, a 25-year-old Mexican prospect with a 25-3 record. Ramirez, who is coming off a split-decision win against Rey Bautista in the former title challenger’s native Philippines, has never been stopped and has scored 15 knockouts.

The Ukrainian southpaw refused to speculate about what he can achieve in his pro career, coyly adding “I am a life maximist and do not intend to move away from my principles, I will do everything to the max.”

Klimas further comments “It is hard to say at this stage how many weight classes Vasyl will be going to, at the moment the featherweight division is very aggressive and interesting with many good fighters, so I think we will stay for little while.

“I really believe in this kid as he has everything it takes to be best of the best in pro boxing,” Klimas continues about his newest signing. “Even fighting in (the) amateurs he had a professional style. Specialists like Teddy Atlas who was a commentator for the USA in the Olympics noted Vasyl and made his comments right after Lomachenko got gold (the) medal, ‘He is one who can make a good pro’ Teddy said.”

If all goes well, it is rumored that Lomachenko will challenge for the WBO featherweight title in January against the winner of the upcoming Orlando Salido-Orlando Cruz bout. If successful, Lomachenko would break the record set by Thailand’s Saensak Muangsurin who won the WBC 140-title in his third pro fight. However, Lomachenko’s stab at the record is currently under scrutiny as he had six bouts in the World Series of Boxing tournament that allows amateur boxers to fight under pro circumstances whilst retaining their amateur status.

Here’s what Lomachenko had to say when RingTV.com caught up with him.

Anson Wainwright: Firstly, welcome to the professional side of boxing. Can you tell us why you decided to turn pro at this stage?

Vasyl Lomachenko: Thank you. Why now? I decided the time just got for me to turn pro.

AW: You visited America and met with several promoters. Can you tell us about this and why you eventually decided Top Rank was the best fit for you?

VL: Yes, I meet with few promoters; and among them Top Rank offered the best deal for me.

AW: You make your debut on the undercard of Tim Bradley-Juan Manuel Marquez on Oct. 12. What can you tell us about your fight with Ramirez on that card?

VL: I do not want to talk much about the fight or my opponent. I just want to let you know that I insist on being equally serious about any opponent.

AW: If all goes well it is rumored that you could face the winner of Orlando Salido-Orlando Cruz in your second professional fight as soon as January. What are your thoughts on that? It would break the previous record. Why are you in such a rush to fight for a world title?

VL : If all goes well then most likely in January I will fight for a world title. I am confident in my abilities and I know I can become a champion. I would like to fight as quickly as possible for the world title and to make history in professional boxing as I did in amateurs.

AW – You were born in the southwest of Ukraine in Bilhorod-Dnistrovskyi. Could you tell us a little about your youth? Were things tough for you growing up?

VL: All of my childhood I spend in boxing gym. I was born in a family of trainers. My mother was an acrobatics trainer and my father was boxing trainer.

AW: How did you become interested in and then take up boxing?

VL: I was very young and do not even remember. I was like 4 or 5 years old. 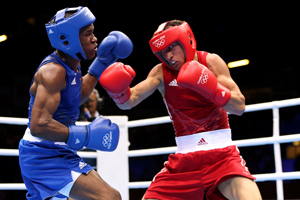 AW: You enjoyed an outstanding amateur career. You won gold at two Olympics as well as two World Championships. Could you tell us about your amateur career?

VL: In 2007, I went to the adult World Championship in Chicago were I came in second. After it I got so much motivation to train harder and harder and I always try in every tournament to get first place, which I managed for all these years. The biggest moment of my amateur career was after I got the gold medal in the 2008 Olympic Games in Beijing, as it was my dream of all childhood.

VL: It is difficult to answer this question now. Let’s get back this one after few fights.

AW: When you look at your career as a professional boxer, what are your goals?

VL: Let me tell you. I am in life maximist, and do not intend to move away from my principles. I will do everything to the max.

AW: Who is your boxing hero and why?

VL: It is difficult to me to say who is the one, but there are number of boxers both from times past and the present from whom we can learn.

VL: I’m an athlete, and all my hobbies and interests has something to do with sports. I love to fish and hunt and I love to play hockey and basketball.

AW: Lastly what would you like to say to the boxing world?

VL: I am not going to make dramatic statements and a lot of talking. Just wait until Oct. 12 and you will see!

Photos /Scott Heavey-Getty Images
Questions and/or comments can be sent to Anson at [email protected]and you can follow him at www.twitter.com/AnsonWainwright