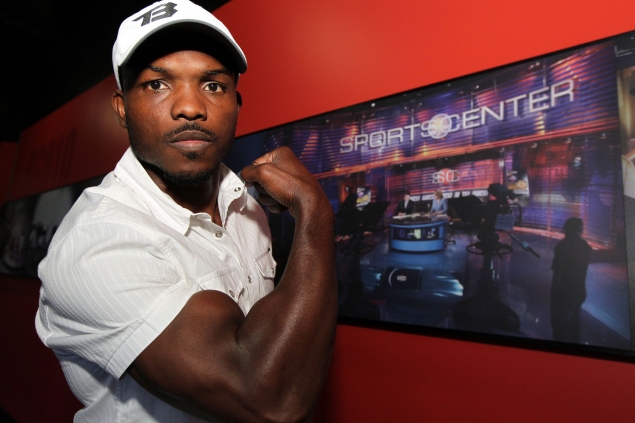 “I think that it’s going to be a very close fight,” said Garcia, who will challenge WBO junior lightweight beltholder Roman “Rocky” Martinez as part of a Nov. 9 tripleheader to include Nonito Donaire‘s featherweight debut in a rematch with Vic Darchynian.

“I think that Bradley has the speed and the hunger, and that he’s willing to do everything that it takes to win. On the other hand, I think that Marquez can catch Bradley and hurt him, because he’s that great of a counterpuncher.”

Besides Manny Pacquiao, who has battled to a draw with and won split- and majority decisions over Marquez (55-6-1, 40 knockouts), Freddie Norwood, Chris John and Floyd Mayweather Jr. have also beaten the Mexican star by decision.

“Those who come to JMM pay the price: Juan Diaz, Michael Katsidis, and, to some extent, Manny Pacquaio. Should Tim want to slug and please the fans, it will be exciting, but he’ll play into Juan Manuel’s hands.”

Garcia believes that Bradley (30-0, 12 KOs), his managerial stablemate with Cameron Dunkin, would be wise not to stand in front of Marquez.

“I wouldn’t be surprised to see Bradley come out and box his way to a 12-round decision,” said Garcia. “I really don’t pick any sides, but I just think that it’s going to be a very, very good fight.”

Bradley also dethroned Kendall Holt by unanimous decision for the WBO’s 140-pound belt in April of 2009, rising from two knockdowns to do so.

“Every adversity that Bradley seems to face in the ring, he seems to find a way to overcome it,” said Tim Smith of RingTV.com. “I don’t know what it is about him, but he just seems to have this incredible survivor skill and instinct.”

Bradley also owns a unanimous decision from July of 2007 over current IBF lightweight titleholder Miguel Vazquez, whose other losses were by split- and unanimous decision to former RING junior middleweight champion Canelo Alvarez.

Casamayor was stopped for only the second time in his career by Bradley, whose next fight was against Pacquiao. Still, in a firefight, Garcia thinks that Marquez’s edge in finishing power could be the difference.

“If I did side with maybe one scenario for someone, I would maybe side a little more with Marquez as the winner,” said Garcia. “”Still, this is a very, very difficult where you have to pick a winner. I see this as almost a toss-up.”

The same appears to be true for the 32 boxing insiders polled about Bradley-Marquez, the results of which are below. 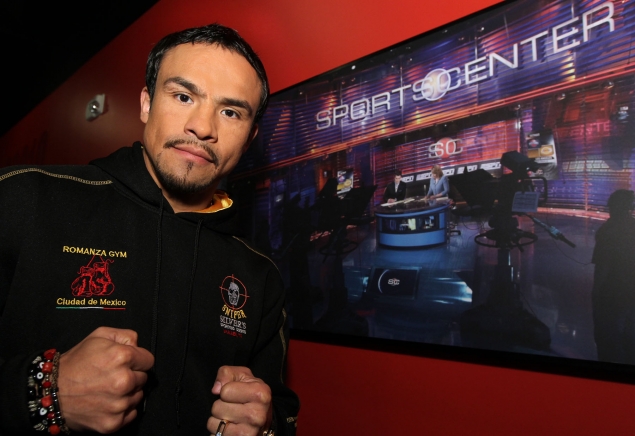 Juan Manuel Marquez KO Tim Bradley: Tim Bradley has always displayed a questionable chin. After engaging in a vicious war with Ruslan Provodnikov, it will be interesting to see how much was taken out of him.

Those two things, coupled with Juan Manuel Marquez’ transformed body and improved punching power, have convinced me JMM will score yet another stunning knockout on HBO PPV.

Marquez is an expert counter-puncher. If Bradley tries to slug with Marquez the way he did with Provodnikov, it’s lights out for Bradley.

I see a very competitive fight ending when a Marquez right-hand bomb catches Bradley coming in, somewhere in the late rounds.

Tim Bradley SD 12 or late KO Juan Manuel Marquez: This is a difficult fight to assess with certainty, which means it is meaningful. But the greater meaning in this contest is against Timothy Bradley. The scalp of Juan Manuel Marquez would be a proud one in the American’s record book.

It will be testy, technical, and could come down to grit and determination. That vim, for me, lies on the side of Bradley, slightly inferior in technique to Marquez, but hungrier. I don’t believe that Bradley beat Manny Pacquiao, but if he sticks to a rugged game plan, he could out-muscle Marquez in this fight.

I have a hunch that Bradley may even be able to catch the Mexican late in the fight. Fight the wrong way, nonetheless, and the legendary Mexican could make Bradley look like a stiff. Bradley by late TKO, or split points decision.

Timothy Bradley SD 12 Juan Manuel Marquez: It’s tempting to say that this one winds up as a draw. Whatever happens, it’ll be close, which could mean controversy. Barring a head-butt or some other unforeseen craziness, however, the edge here goes to Tim Bradley for all of the intangibles.

Bradley has the look of a fighter with renewed confidence and energy. The bitter aftermath of his decision over Manny Pacquiao is gone. All of that, of course, can crash faster than Pacquiao did if Juan Manuel Marquez lands another big punch.

The guess is that Bradley is too clever to let that happen. Remember, Marquez, now 40, was losing to Pacquaio when his right hand landed like lightning. Bradley figures to be a lot more cautious than Pacquiao ever has been with tactics that will score enough points for a narrow win.


Tim Bradley UD 12 Juan Manuel Marquez: This fight is such a toss up. It’s hard to pick a winner when such a clear path to victory exists for both fighters. For Tim Bradley, that path, if he can still walk it straightly, is to out-box Juan Manuel Marquez and avoid a firefight.

For Marquez, that path, if he can get Bradley to walk the walk on it with him, is to engage “The Desert Storm” in close quarter combat and land counters. Which fighter will be most able to impose his advantage on the other? The pick here is Bradley.

When he wants to be, Bradley is a very slick boxer and Marquez is a 40 year old warrior who can be out-boxed. If Bradley can check his fighting ego at the door and stay focused on winning the match, and not necessarily new fans, his path to victory is the one most likely to be walked on by both boxers. Bradley wins by competitive but unanimous decision.

Juan Manuel Marquez UD 12 Tim Bradley: This is a fabulous showdown between a living legend and a two weight world champion who still yearns for respect. Tim Bradley’s main assets are hand speed and movement, but I can see Juan Manuel Marquez neutralizing those advantages with a perfectly-timed counter jab and crisp body shots.

The Mexican has sublime timing, and I just can’t envision “Desert Storm” Bradley having continued success against a ring genius like Marquez. “Dinamita” may have had trouble with movers in the past, but he had no motivation against Chris John and no chance against the bigger man in Floyd Mayweather.

Marquez’s confidence is sky high coming off the Manny Pacquiao knockout, and the prospect of a world title in a fifth weight class has him oozing motivation. The fight will be competitive, but there will be no doubt who has won at the end of 12 action-packed rounds. We just need the judges to see the same fight that everyone else did. 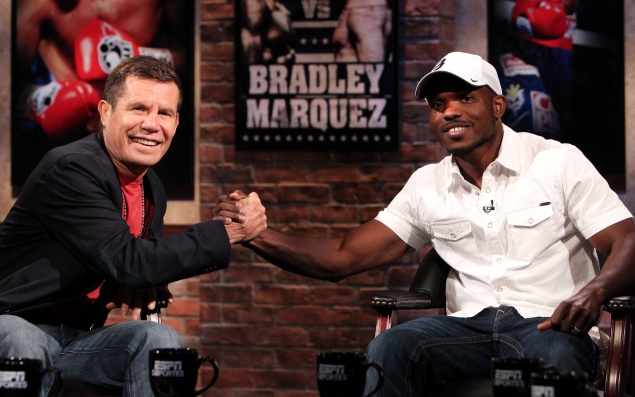 Timothy Bradley UD 12 Juan Manuel Marquez: Tim Bradley’s volume will be the key to victory, for it will allow him to jam Juan Manuel Marquez’s sophisticated radar and keep the 40-year-old master counter-puncher overly focused on defense.

Marquez’s spectacular one-punch knockout of Manny Pacquiao masked the fact that, to that point, he was being beaten rather soundly. Marquez’s face was a mask of blood, and despite scoring the third-round knockdown, he still seemed to be adversely affected by Pacquiao’ss speed.

Bradley showed against Pacquiao that his speed is at least comparable to the Pac Man’s, which is a good sign for “The Desert Storm.” Like his younger brother, Rafael Marquez, Marquez’s defensive numbers have been slipping as of late, which tells me his reflexes have eroded somewhat. If Marquez is to win, he needs those reflexes and he can’t afford to fall too much in love with his power.

Bradley has the youth, grit and volume to take full advantage and if he doesn’t let Marquez’s knowledge and experience intimidate him into a waiting game — as was the case with Canelo Alvarez against Floyd Mayweather Jr. and Tavoris Cloud against Bernard Hopkins — he should win a fairly solid decision.