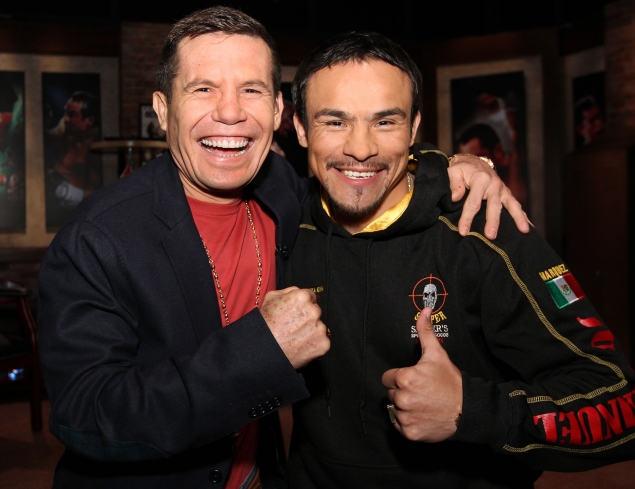 Juan Manuel Marquez’s stature in Mexico is almost as high as the country’s boxing idol, Julio Cesar Chavez (left), following his sixth-round KO of Manny Pacquiao in December. The respect and adulation of Mexican fans convinced Marquez to remain in boxing at age 40.

LOS ANGELES – Tim Bradley says he would have retired after knocking out Manny Pacquiao if he were in Juan Manuel Marquez’s shoes.

Most people would have. It was the perfect performance for the Mexican veteran to end what is certainly a hall-of-fame worthy career. However, Marquez, who will challenge Bradley for the WBO welterweight title on Saturday at Thomas & Mack Center in Las Vegas, is not like most people.

His desire to challenge himself is so strong it separates him from his fellow prize fighters. Marquez’s fighting spirit was never so evident than the night he traded knockdowns with Pacquiao before landing what was arguably the most significant punch of this decade when he knocked his arch rival out with a single right hand at the end of the sixth round of their fourth bout on Dec. 8.

If it wasn’t the most significant punch of the 2010s, it was certainly the most satisfying victory of Marquez’s stellar boxing career, as he blasted a fellow future hall of famer who had held him to a draw and twice defeated him by painfully close decisions.

By knocking out Pacquiao, Marquez not only earned THE RING’s Fighter of the Year honors for 2012, he gained a level of respect and adulation from his country that has only been given to the legendary likes of Ruben Olivares and Julio Cesar Chavez.

Which, of course, begs a couple questions: What more does the 20-year veteran, who has won major titles in four divisions, have to prove?

Why did he take on a dangerous young titleholder like Bradley?

Marquez, who turned 40 on Aug. 23, was happy to answer these questions during a Tuesday press brunch at the Millennium Biltmore Hotel in Los Angeles.

The bottom line is that a fire still burns in his belly and he’s feeling too good right now to quit. 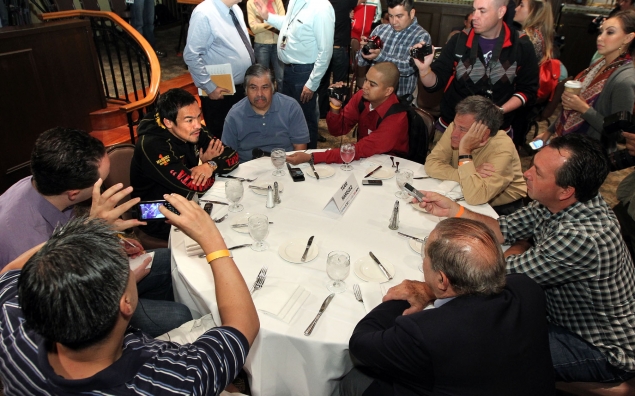 “This fight represents another title opportunity for me – a fifth title,” said Marquez, who didn’t have to mention that he’d be the first Mexican boxer to win major belts in five divisions if he beats Bradley.

It’s not just about history for Marquez. It’s personal because the WBO belt that Bradley holds once belonged to Pacquiao.

“I should have won that title when I fought Pacquiao in 2011, but I don’t know what happened with the judges,” Marquez said, referencing the third bout with his rival, which he lost by controversial majority decision.

Bradley (30-0, 12 KOs) took the WBO belt from Pacquiao by winning a controversial split decision over the Filipino icon last June. The 30-year-old Palm Springs, Calif., native followed up his unpopular title win with a very well-received slugfest against Ruslan Provodnikov in March.

Bradley suffered a concussion early in the bout but survived numerous wobbly moments to outbox and outfight the hard-punching Siberian and earn a close unanimous decision. Many fans and members of the media who are picking Marquez to beat Bradley are doing so because they believe the American fighter might be “damaged goods” after the grueling affair with Provodnikov.

“I’m expecting the best Bradley,” he said. “He proved he had heart against Provodnikov. He proved that he is a strong fighter. I think he’s a great fighter.”

Far more people believe that Marquez is a great fighter. It’s that recognition, perhaps more than anything else, that’s keeping him in the fight game.

Marquez fought in the shadows of fellow Mexican champions Marco Antonio Barrera and Erik Morales during most of his prime. The dynamic duo, who engaged in one of the sport’s greatest trilogies, had more crowd-pleasing styles than Marquez did when he campaigned in the featherweight class in the 1990s and early-to-mid 2000s. However, Marquez, the more technical of the three standouts, always wanted test his skill against theirs.

However, despite fighting under the same promotional banners as the more popular fighters during their primes (Forum Boxing with Barrera and Top Rank with Morales), Marquez was avoided by the management of both during their peak years.

Marquez finally got a shot at Barrera, then the 130-pound champ, in March of 2007, and he won a hard-fought unanimous decision. However, this bout came four years after Pacquiao dominated Barrera to an 11th-round TKO. Pacquiao, who had gone 2-1 against Morales (scoring two stoppages) in their thrilling trilogy in ’05 and ’06, won a lopsided decision over Barrera in their rematch later in ’07.

By knocking out Pacquiao, Marquez “one-upped” his longtime peers in the eyes of the boxing world – especially Mexican fans.

“It feels great,” Marquez said. “For years the Mexican fans looked to Barrera and Morales and supported them. Me? Never mind about me, but now that’s all changed.”

In many ways, Saturday’s HBO Pay Per View event against Bradley is part of an extended Pacquiao victory lap for Marquez. Although one has to wonder if the aging fighter will trip over one of the most difficult young veterans in the game while “celebrating” his late-career success.

Not a chance, Marquez told boxing writers on Tuesday. Just because he’s having a good time doesn’t mean he isn’t training just as hard – perhaps harder – than he has for previous challenges.

“I like training very hard,” Marquez said. “It’s why I’m still fighting. I have 62 fights but I feel great. I haven’t had a lot of wars. I was a defensive fighter for a long time. If I wasn’t (a technical fighter) – if I’d had a lot of tough fights – I would have probably retired five or six years ago.

“I never imagined I’d still be fighting at age 40, but when I began boxing I knew I had to have the discipline and put the work in just to have a chance to achieve my dreams. I didn’t know how far I’d go but I knew I had to work hard to get there.”

It was a long and arduous journey, but he got there – probably beyond his dreams. And now that he’s here, he’s going to stay awhile.