Bradley: A long, painful journey from Pacquiao to Marquez 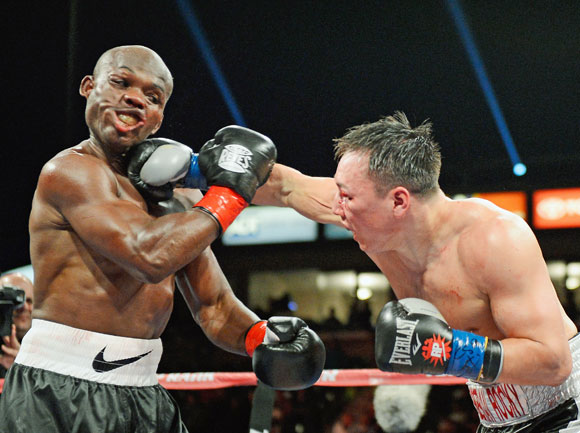 Joel Diaz, the trainer of Timothy Bradley, acknowledged that he was worried.

Bradley was starting training camp for his fight against Juan Manuel Marquez only about five months after his unforgettable meeting with Ruslan Provodnikov, a war so brutal that he had headaches and slurred speech for weeks afterward.

Would Bradley recover in time to fight effectively against Marquez? Would he EVER fully recover?

Diaz came up with a plan to find out: He arranged for Bradley to exchange punches with Lucas Matthysse in the very first sparring session of his training camp. The result proved to Diaz – and perhaps Bradley – that the fighter had recovered and would be ready to face Marquez this Saturday night in Las Vegas.

“I’m going to be honest with you,” Diaz said Monday during small news conference in Los Angeles. “Yes, I was worried. The first week of camp his balance was off, his equilibrium was off. Even his speech a little. ÔÇª I said, ‘Tim, I’m very concerned. I don’t want you to get hurt in there. I’m concerned about the punches you took.

“He said, ‘Coach, I’m good.’ I said, ‘Yeah, every fighter says he’s good.’ ÔÇª The test was Matthysse, who was a few weeks away from fighting Danny Garcia. I wanted to see how he would react to a heavy hitter. I watched and thought, ‘OK, we’re good. He showed me that Tim is there.”

Bradley’s precarious condition going into camp had its roots in his victory over Manny Pacquiao to win the WBO welterweight title in June of last year, which most people dismissed as a horrible decision.

However, instead of going after the judges who goofed, many fans – hiding behind the anonymity of Twitter and other social media outlets – bombarded Bradley with one cruel comment after another for many days.

Bradley, as well as members of family, were devastated. Someone who sees himself as a great fighter suddenly was depicted as a fraud even though he had never lost a fight. 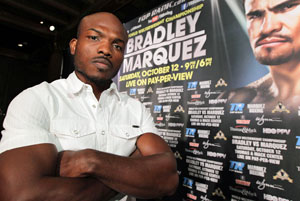 “A lot of people came after me,” Bradley said. “I got laughed at. It was a terrible time. My kids had to deal with this, people saying your dad didn’t win. It was a bad time. Every morning there were numerous comments. It would start around 5:30 in the morning and wouldn’t end till around 3 in the morning. And it would start against the next day at 5 or 6, somebody posting something negative about me.

“I thought, ‘Wow, they’re waking up thinking about me.’ ÔÇª I just stopped reading the internet.”

The pain didn’t subside, though. Bradley went into the Provodnikov fight angry and determined to prove his newly acquired doubters dead wrong, even if it meant risking his own well being.

Bradley has never been afraid to mix it up but he’s a boxer first, a quick-handed, elusive technician who was more likely to beat you with his skills than his power or heart. That changed dramatically when he met Provodnikov in March.

He said he made the decision to brawl the night before the fight.

“It was like, ‘I’m going to kick the sÔÇöt out of this guy,” he said. “‘I’m not taking no for answer. I don’t care what anybody says, I’m taking him out.’ The night before (the fight) my wife cried. I told her that night about my plan. She was like, ‘Don’t do it, don’t do it.’ She cried because she knew what I was going to do.”

And he did it. He traded punches with one of the toughest fighters in the world to prove to everyone – including himself – that he was worthy of the title “champion.” In the process, he might’ve taken more brain-jarring punches in 12 rounds than he had taken in his previous 30 fights combined.

Bradley won by a close, unanimous decision, somehow ending the fight on his feet, a feat that proved both his valor and surreal ability to absorb punishment, but he paid a price in terms of head trauma. It was the kind of brawl that can shorten the careers of its principals.

Bradley said he remembers only the first and last rounds of the fight, the middle 10 being lost in a fog. And he admitted that when he first saw his swollen head in the mirror after the fight, he thought very simply: “Holy sÔÇöt!”

Even he couldn’t believe he was able to take the kind of punishment he took against Provodnikov and live to talk about it. “I could’ve died,” he said with fainthearted chuckle.

“I was just blown away,” Bradley responded when asked what he thought when he watched the video of the fight for the first time. “ÔÇª I just couldn’t’ believe I could take big shots like that and couldn’t believe I was still standing after the fight. It showed me what type of fighter I am, the type of heart I have, determination, will. It showed boxing fans around the world what I’m made of, that I’m a tough, tough cookie to crack.

“ÔÇªWhen I went to New York to visit with HBO (afterward), they treated me differently. My promoters treated me differently. People around town showed a lot of respect. They said, ‘Man, what (a) heart you have. I can’t believe you withstood big shots like that and continued to fight.’ ÔÇª At the end of the day, the feedback made it worth it. Things happen for a reason, to fight that way that night. I’m glad I came out on top. I felt like it brought more light to my career. After the Pacquiao fight, the lights got real dim. I was in a very bad spot, very bad spot.”

Bradley soon afterward was rewarded with a lucrative pay-per-view matchup with Marquez. However, he still had to prove to his trainer that he was up to the challenge after emerging from hell against Provodnikov.

Diaz asked Bradley what he thought about sparring with Matthysse, one of the hardest punchers in the world. “Great,” responded Bradley, who trains not far from his home in Palm Springs, Calif. One thing, though: Bradley never imagined the Argentine would be his first sparring partner.

“Who spars with Matthysse on their first day back?” he said, apparently still in disbelief. “Who does that? I haven’t been in the ring for (more than) four months. Who the hell does that? ÔÇª That Monday I walk into the gym. I see all these people with cameras. I thought, ‘What the hell? Who is here?’ I see Matthysse on the ring. I thought, ‘Am I sparring Matthysse or is he just here training?’ (Diaz) said, ‘You’re sparring Matthysse.’ I was like, ‘OK.’ I’m a dog. Bring it on.”

It was the most important sparring session of Bradley’s career.

“That let me know I can still take a punch,” he said. “Matthysse hit me with a left hook. It sent me half way across the ring. I had to stop a second. I thought, ‘God dÔÇön, he’s strong.’ I didn’t get dazed, though. And it was a solid shot. ÔÇª I got caught (with a number of) good shots and didn’t get buzzed.”

“I thought, ‘Well, at least I know I have my chin. It was perfect. From there, I was confident, very confident.”

Thoughts shifted to Marquez, a counterpuncher who feeds on aggressive opponents.

Bradley made it clear on Monday that he has no intention of attacking the Mexican as he did Provodnikov, saying “if they believe that, they’re stupid.” Bradley has already proved his point. Sure, he wants to please the fans – who wouldn’t after the love he received following the Provodnikov fight? – but the objective Saturday is to win.

Diaz couldn’t have been much more pleased with this training camp. Bradley survived Matthysse, shed about 35 extra pounds and, Diaz said, looked extremely sharp in his final sparring session on this past Saturday.

Bradley’s final sparring partner was Diaz’s brother Julio, a world-class welterweight. They went at it for five rounds.

“Julio is a true welterweight,” Joel Diaz said. “Julio hits hard, he’s been in the business for years. And he told me, ‘If Tim does what he did today, Marquez is not even going to be able to find him. If he fights like he sparred, Marquez is going to get frustrated and Tim is going to take him. Every time I tried to unload on him, I couldn’t find him. After the third round, I felt tired because I took so many punches while I was trying to knock his head off. Every move I made he was hitting me – and hitting me hard.’

“I said to Julio, ‘OK, that makes me feel good.’ He said, ‘I’m telling you: As long as Tim listens to you like he listened to you in training, he’s going to win this fight.’ ÔÇª Then, if he comes out with a good victory, a no bull-sÔÇöt victory, if he beats him right, he’ll get all the credit in the world.”

And perhaps any lingering pain over the Pacquiao aftermath will become a distant memory.