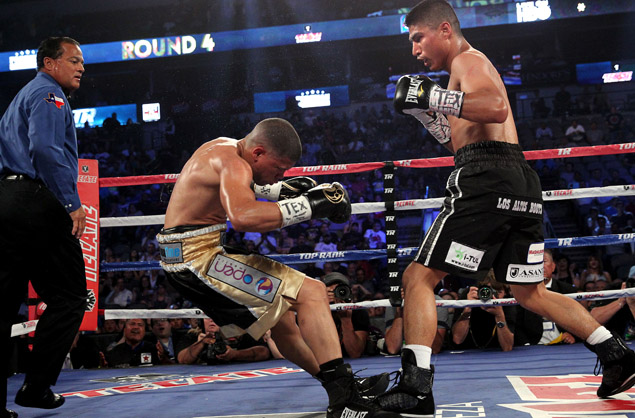 Featherweight champion Mikey Garcia will be featured on HBO’s 2 Days in advance of challenging WBO junior lightweight beltholder Roman “Rocky” Martinez as part of a Nov. 9 tripleheader to include Nonito Donaire‘s featherweight debut in a rematch with Vic Darchynian.

2 Days: Mikey Garcia will be aired at 1:15 a.m. ET/PT following HBO’s debut of the Legendary Nights documentary based on the Arturo Gatti-Micky Ward trilogy, which will be broadcast at midnight on Oct. 19.

The night of boxing will begin with the 9:45 p.m. ET/PT airing of the junior welterweight bout featuring Ruslan Provodnikov against WBO titleholder Mike Alvarado.

Garcia (32-0, 27 knockouts) is the WBO’s mandatory challenger to face Martinez (30-1-1, 20 KOs), who is coming off a split-decision victory over previously unbeaten Diego Magdaleno in April, which followed a split draw with Juan Carlos Burgos in January.

A boxer-puncher from Oxnard, Calif., Garcia, 25, is coming off January’s eighth-round technical decision over Orlando Salido, which was followed by June’s fourth-round stoppage of former titleholder Juan Manuel Lopez. Garcia was overweight prior to his contracted 126-pound bout with Lopez, costing him his WBO belt at the scales.