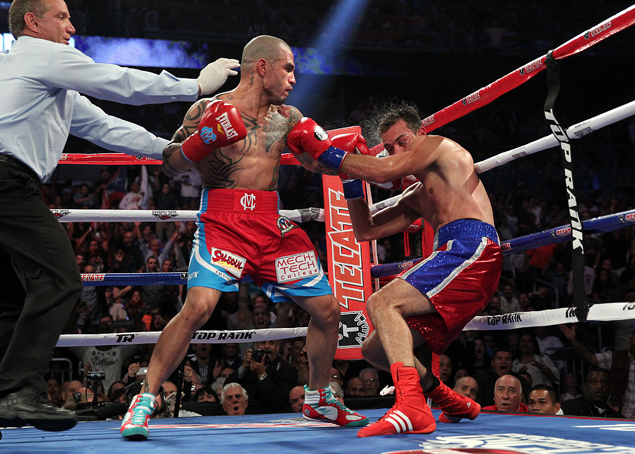 When it comes to rebuilding fighters Freddie Roach is almost in the league of the late, great Emanuel Steward.

The hall-of-fame trainer joined forces with James Toney in the late 1990s, a time when the former middleweight and 168-pound titleholder was considered washed up. However, with Roach in his corner, Toney regained his form and won a cruiserweight title as well as Fighter of the Year honors in 2003.

Roach took on Amir Khan after the popular British lightweight prospect suffered a first-round knockout to Breidis Prescott in 2008. Khan was abandoned by most fans but under Roach’s guidance he won eight consecutive bouts over the next three years, winning two major 140-pound titles along the way.

Roach even rebuilt his own star fighter, Manny Pacquiao, after the Filipino icon lost to Erik Morales in 2005. Roach improved Pacquiao’s technique as the dynamic southpaw won his next 15 bouts, beating the biggest names in the sport and winning titles at 130, 135, 140, 147 and 154 pounds along the way.

Can Roach do the same with Miguel Cotto? If the Puerto Rican star’s performance against junior middleweight fringe contender Delvin Rodriguez, his first fight with Roach, is any indication the answer is a resounding yes.

Cotto (38-4, 31 knockouts), who has been in many grueling fights during his 12-year pro career — including brutal late TKOs to Pacquiao and Antonio Margarito — showed that he still has a lot of fight left with a dominant third-round technical stoppage of Rodriguez on Saturday in Orlando, Fla.

Cotto was coming off two decision losses in 2012 — to Floyd Mayweather and Austin Trout — putting his career in question. However, the three-division titleholder’s union with Roach clearly paid off.

Cotto fought Rodriguez (28-6-3, 16 KOs) with the same calculated aggression and accurate power punching that he displayed during his prime as an undefeated junior welterweight and welterweight titleholder. The 32-year-old veteran confidently marched forward, cut the ring off, landed his hook and ruthlessly attacked Rodriguez’s body in the first two rounds of the HBO-televised bout. 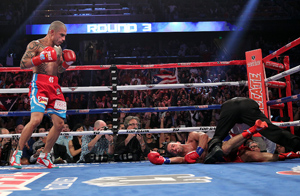 Cotto hurt Rodriguez with a right cross-left hook combination at the end of the second round. He jumped on his wounded opponent at the start of the third, pushing Rodriguez to the ropes where he landed a right to the body and hook to the head that caused the 33-year-old Dominican to slump helplessly into the ropes. Referee Frank Santore Jr. jumped in to save Rodriguez as Cotto landed follow-up power punches.

The fight was stopped at 2:42 of the third round.

Cotto connected with 50 percent of his overall punches and 54 percent of his power shots, according to CompuBox. He did not look like a shot fighter, as some suggested he was following his disappointing loss to Trout last December. He looked like an elite fighter.

Roach was pleased with what Cotto did against Rodriguez.

“The body shots broke him down, the head shots knocked him out,” Roach said. “(Cotto) came (to my gym) so confident and he worked so hard. He put the hours in. We’re going to have a lot of big fights after this. Line them up.”

With Saturday’s sensational performance, Cotto positioned himself for a number of high-profile matchups against the likes of middleweight champ Sergio Martinez, former junior middleweight champ Canelo Alvarez, and even Mayweather, who he troubled during last year’s fight.

Roach said he likes the idea of a showdown with Martinez during a media day workout for Cotto in Los Angeles two weeks ago.

“I knew Cotto could fight but you learn more about a fighter when you work with them one on one. He’s really strong and a great puncher. He’s got a great hook. I pissed blood once at home after working the mitts with the body pads with him.”

Roach’s focus for their first camp was to rekindle Cotto’s offensive prowess. Cotto had become lighter on his feet and less heavy with his punches under his last coach, Pedro Diaz. Roach wanted Cotto to plant his feet more, commit to his punches and let his hands go.

“Sometimes he was hesitant with his punches,” Roach said. “I’m an offensive coach and I’d like him to let his hands go more.”

Cotto did that against Rodriguez with devastating effect. Time will tell if he can be as effective against elite fighters, but for now Cotto knows that he did the right thing by putting his trust in Roach.

“I just want to finish my career the best way possible,” Cotto said at his media day workout. “Freddie Roach is the guy to be the captain of this ship. Freddie knows a lot about boxing so I just follow everything he says to me, I follow his instruction. I know everything he says is for my benefit.”