MANILA, Philippines – Less than a week into sparring, Manny Pacquiao is already replacing one sparring partner with another after battering middleweight Marlon Alta on Saturday afternoon.

Junior welterweight Dan Nazareno Jr. (17-10, 13 knockouts) will be flying from Manila to General Santos City on Monday to help Pacquiao (54-5-2, 38 KOs) prepare for his Nov. 24 bout with Brandon Rios at the Venetian Resort in Macau, China.

Alta was stopped in the second round of sparring at the Pacman Wild Card Gym a minute into the round by an overhand left cross. Fredrick Lawson (21-0, 19 KOs) of Accra, Ghana relieved him, going three rounds with Pacquiao.

Alta (12-3, 9 KOs) hasn’t fought since being stopped in six rounds last October. The 23-year-old middleweight is said to have been out of shape and weighing about 175 pounds. Alta was brought in at the last minute in the place of South Korean Min-Wook Kim, the OPBF 140-pound champ, whose arrival has been delayed for unspecified reasons. 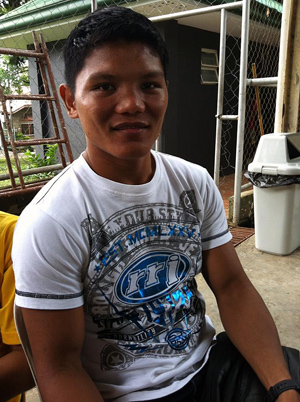 Coincidentally, Nazareno, of San Fernando, Philippines, hasn’t fought since being stopped by Kim in two rounds last November, but says he has been deep in training for a fight in Japan on Nov. 25. He says he was excited to receive the call from Pacquiao’s assistant Jonathan Penalosa on Saturday evening for sparring.

“It’s my dream to taste the power of Manny Pacquiao’s punches,” said Nazareno, who had beaten Alta by a six-round decision when both were lightweights in 2007. “First reason is that since Manny Pacquiao is a world champion. Second is that I want to face the punches of Manny Pacquiao to see where I’m at, if I need to do more training, some more footwork and conditioning. Third is that I’m inspired by him.”

Nazareno added: “Also, I want to be on an undercard in one of Manny Pacquiao’s fights.”

Aside from the Kim fight, Nazareno has been sturdy, having gone the distance with a number of unbeaten fighters in Russia, South Korea, Thailand and Mexico. His aggressive, hard-hitting style is more like Rios’s than is Lawson’s approach.

Former two-time world champion Gerry Penalosa, who was on hand to witness Saturday’s sparring session, feels Nazareno will be a good addition to Pacquiao’s camp.

“Nazareno can be a help to Pacquiao,” Penalosa said. “He’s better than Alta.”

“Lawson was good. He was moving around and kept throwing punches but only hit the gloves,” said Manangquil, who manages prospect Harmonito Dela Torre and world-rated contender Randy Petalcorin.

“Pacquiao hit him in the second round with an overhand left, and if Pacquiao followed up he would have stopped the guy.”

Pacquiao’s trainer Freddie Roach will be working the corner of Miguel Cotto tonight against Delvin Rodriguez in Orlando, Fla., after which he will fly out to join Pacquiao’s camp for the final six weeks of training. Strength and conditioning coach Justin Fortune will also be flying in to General Santos City, and is expected to arrive on Sunday.

Roach is said to be bringing a pair of sparring partners with him to add to Pacquiao’s camp.

The Rios fight will be Pacquiao’s first since suffering back-to-back-losses to Timothy Bradley and Juan Manuel Marquez last year.