Round by round: Klitschko has four knock-down UD 12 over Povetkin 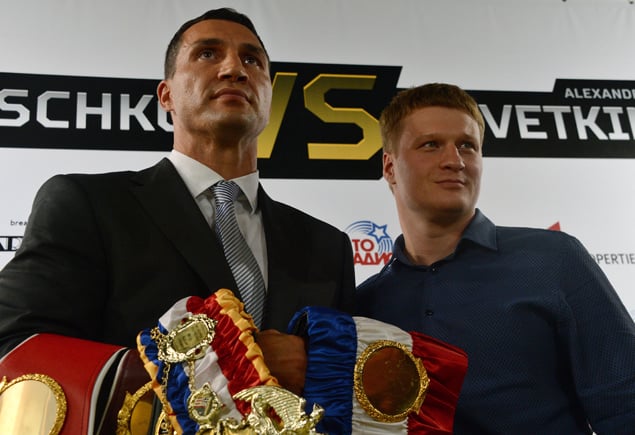 RingTV.com has live, round-by-round updates on this page for Saturday’s clash of former Olympic gold medalists during which RING, IBF, WBA and WBO heavyweight champion Wladimir Klitschko (61-3, 51 knockouts) scored four knockdowns on the way to a shutout, unanimous decision over Alexander Povetkin (26-1, 18 KOs) as part of the Cotto-Rodriguez broadcast later that day.

Klitschko scored a knockdown once in the second round and dropped his man three times in the seventh of a fight that aired on HBO at 3:30 p.m. ET, and will be shown again as part of the 9:45 p.m. ET/PT broadcast of the junior middleweight bout between three-division titlewinner Miguel Cotto and Delvin Rodriguez from the Amway Center in Orlando, Fla.

A 1996 Olympic gold medalist for Ukraine, Klitschko, 37, came up with his 19th consecutive victory during a run that includes 13 knockouts against Povetkin, a 34-year-old winner of Olympic gold for Russia in 2004.

Alexander Povetkin enters to videos on a big screen of highlights of his fights. He’s wearing a black robe trimmed in red. Interestingly, little to no fan noise during his ring walk other than a rush of cheers once in the ring.

HBO’s Jim Lampley mentions that Povetkin had tried unsuccessfully to lure trainer Freddie Roach for this fight. Roach, however, will be in Miguel Cotto’s corner for his fight with Delvin Rodriguez.

Wladimir Klitschko enters to videos on a big screen of highlights of his fights, to his usual Red Hot Chili Peppers’ “Can’t Stop.” Wearing red robe trimmed in yellow.

Povetkin introduced to resounding cheers, being in his partisan Mosco, and Klitschko, also cheered with a smattering of boos.

Judges:  ALL THREE JUDGES, Ted Gimza, Glenn Feldman, both from the United States, and Philippe Verbeke, from Belgium, HAVE IT 119-104 FOR KLITSCHKO, BY UNANIMOUS DECISION.

HAROLD LEDERMAN HAS IT 119-104 FOR KLITSCHKO

Round 1: The round has begun. Klitschko runs out and engages. Tries to extend the jab and Povetkin clinches and pounds to the body. They trade left hooks and clinch again. Povetkin’s goal is to get inside and land. Two jabs by Klitschko. Another clinch. Another Klitschko jab. Two more Klitschko jabs. Povetkin trying to crowd and duck beneath. Povetkin digs to the body. Povetkin sneaks in a right but takes a BIG left hook. Povetkin thrown to the canvas during a clinch. Klitschko, 10-9.

Round 2: Klitschko out-lands Povetkin, 8-to-6, in round one. Klitschko opens with a jab and a right hand. Povetkin sneaks in a clubbing left during a clinch. Give Povetkin credit for trying to leap in and roughhouse. Smart tactics. Four decent jabs by Klitschko. Crowd’s booing. Povetkin lands one of two right hand attempts and another clinch. POVETKIN DOWN ON ALL FOURS FROM A CLEAN JAB!!! He rises. Klitschko, 10-8; Klitschko, 20-17.

Round 7: Lederman has it 60-53 for Klitschko. HARD LEFT AND RIGHT BY KLITSCHKO, WHO THROWS POVETKIN TO THE CANVAS. IT’S RULED A KNOCKDOWN by referee Luis Pabon. Povetkin gets hammered with an assortment of blows and GOES DOWN A SECOND TIME AND RISES AFTER A LEFT UPPERCUT. Left hook WOBBLES Povetkin. Povetkin GOES DOWN A THIRD TIME FROM A LEFT HOOK. Rises, yet again. Povetkin gets out of the round. Klitschko, 10-6; Klitschko, 70-59.

Round 9: Klitschko has not landed a body shot at all, according to CompuBox. All head shots. Lederman has it 80-68, for Klitschko. Povetkin down again from an apparent left jab, but it’s ruled a slip.  Klitschko goes back to setting up the right hand behind the jab. Povetkin misses a left and takes a Klitschko left. Five thudding  jabs by Povetkin, who is all busted up. Head-twisting right, left, right by Klitschko. Clinches. Left hook and clinch from Klitschko. Right by Povetkin. Clinch. Klitschko, 10-9; Klitschko, 90-77.

Round 11:.Klitschko loses balance and almost goes down from a jab to the body. But after righting himself, he’s back to the jab and clinch mode. Grazing right by Povetkin. Jab and grab by Klitschko. Four unanswered short jabs by Klitscko. Right and left by Klitschko stop Povetkin in his tracks. Two left hooks by Klitschko. Klitschko penalized a point for pushing Povetkin to the canvas. Left uppercut by Klitschko. Even, 9-9; Klitschko, 109-95.

Round 12:. Klitschko has dominated. Continues to jab and leap in with the left hook and right hands prior to clinches. Jab and grab for Klitschko. Two short jabs by Povetkin. Jab and right by Klitschko. Pabon pauses the fight to allow tape on Povetkin’s right glove to be secured. Povetkin is lumped up and bloody around the eyes. Four jabs by Klitschko; grazing right by Povetkin, who gets slung to the canvas again by Klitschko. Short left insiide from Klitschko. Klitschko, 10-9; Klitschko, 119-104.

HAROLD LEDERMAN HAS IT 119-104 FOR KLITSCHKO