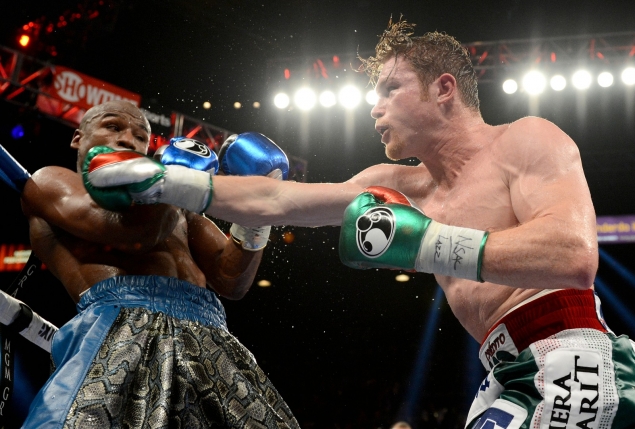 Canelo Alvarez, who was sullen last month in the aftermath of being dethroned as RING and WBC junior middleweight champion to Floyd Mayweather Jr., proclaimed himself to be “very happy with Golden Boy Promotions” as a means of dismissing any notion that his contract with the organization is nearing its completion.

“I have a contract with Golden Boy Promotions with which I am very happy,” said Alvarez, in a prepared statement that was sent out on Friday. “Any event or matter that points to the contrary is false.”

“I am very happy with Golden Boy Promotions,” said Alvarez, who slipped to 42-1-1 with 30 knockouts after falling to Mayweather (45-0, 26 KOs). “I’m scheduled to travel next week to Los Angeles to meet with [Golden Boy CEO] Richard Schaefer and [Golden Boy matchmaker] Eric Gomez for a meeting that we hold after each fight.”

Marquez, who turned 40 in August, decisioned Sergei Fedchenko for the WBO’s 140-pound belt in April of 2012 at a time when was initially an interim” belt before later being upgraded to full status, according to Valcarcel.

In his next bout last December, Marquez rose into the 147-pound division for a non-title sixth-round stoppage of Manny Pacquiao, who already had been dethroned as WBO beltholder via split-decision loss to Bradley in June.

Alvarado was last in the ring for a unanimous decision win over Brandon Rios for the WBO’s interim belt in March that avenged his seventh-round stoppage loss to Rios in October of last year.

In his last fight, also in March, Provodnikov scored a 12th-round knockdown during a unanimous decision loss to Bradley in defense of the title he won from Pacquiao.

Marquez can become the first Mexican fighter to win a belt in a fifth weight class by defeating Bradley.

“My biggest motivation for this fight” with Bradley, said Marquez, “is winning a fifth world title in five different divisions.”

Mexican junior welterweight Ricardo “Dinamita” Alvarez (21-2-3, 13 KOs), the 31-year-old brother of Canelo Alvarez, will pursue his 13th victory in his past 14 bouts and his ninth stoppage during that streak against Colombia’s Humberto “Metralleta” Martinez (27-7-1, 21 KOs) on Saturday night at in Mexico in the main event of a Televisa and FOX Deportes-televised tripleheader.