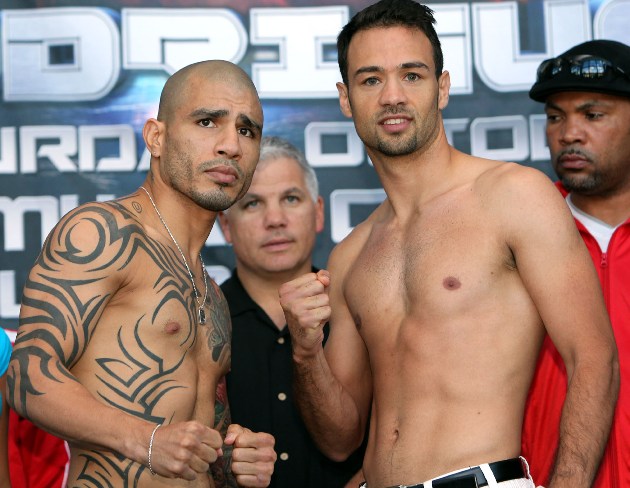 Three-division titlewinner Miguel Cotto weighed 153.2 pounds compared to the junior middleweight limit of 154 for rival Delvin Rodriguez on Friday in advance of Saturday’s bout at the Amway Center in Orlando, Fla., on HBO.

Cotto (37-4, 30 knockouts), who turns 33 on Oct. 29, has lost his past two bouts by unanimous decision against Floyd Mayweather Jr. and Austin Trout. Cotto’s last victory was in December of 2011, a 10th-round stoppage of Antonio Margarito.

A 33-year-old resident of Danbury, Conn., born in the Dominican Republic, Rodriguez (28-6-3, 16 KOs) has won two straight by knockout since falling to Trout. Rodriguez knocked out previously unbeaten George Tahdooahnippah in the sixth round, and Freddy Hernandez in the eighth.

Crawford, who turned 26 on Sept. 28, has won five of his past six fights by knockout, and Klimov, 31, is coming off a majority decision over John Molina in June.