THE RING Magazine November issue: At a glance 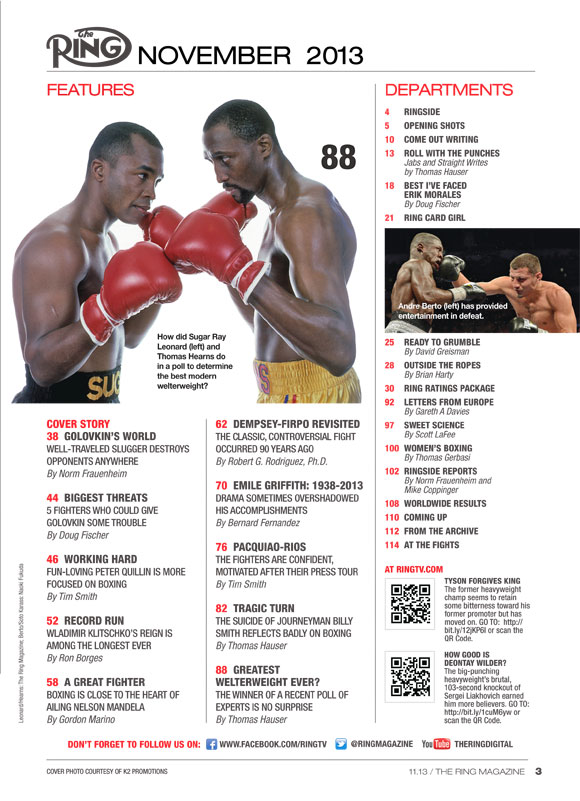 Gennady Golovkin, by most estimations, is a superstar waiting to happen.

The former amateur star, who is from Kazakhstan, has fought around the world and turns heads everywhere he goes. A perfect record and knockouts in all but three of your fights has a way drawing attention.

That’s why the boxing world is so excited about the middleweight titleholder. And it’s why THE RING decided to make him our cover boy the November 2013 issue.

You can read about GGG (his nickname) in contributor Norm Frauenheim’s story A Tour de Force in Any Language, which focuses on Golovkin’s ability to connect with boxing fans everywhere. 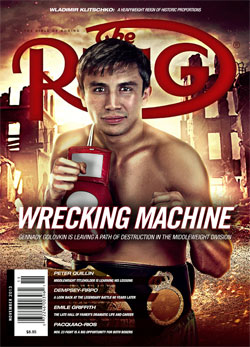 Frauenheim wrote: “The multi-lingual Golovkin communicates best without words. He allows his prolific ring skill to say it all in a language as universal as it is historical. There’s no confusion, no horse milk, in what the unbeaten middleweight has been doing with consistency defined by an eye-catching knockout ratio.”

Also, RingTV.com Editor Doug Fischer, gives you in Golovkin’s Undoing? five fighters he believes could give Golovkin some degree of trouble in the ring.

Among other featured articles, contributor Tim Smith writes in Maturation Process that Peter Quillin – another middleweight titleholder and a potential opponent of Golovkin – is doing what’s necessary to keep his belt and continue to grow as a fighter.

At least that’s how his trainer, Eric Brown, sees it. Brown said he has seen a dramatic change in his fighter since he won the title by beating Hassan N’Dam N’Jikam in October of last year.

“The championship has done a tremendous amount of good for him,” Brown said. “You have guys who have a lot of talent, but never get to that championship because they never fully understand what it takes to get there. But when they win the title, they can see just how that hard work paid off. It’s a confirmation. Peter now sees it, and he also sees how hard it is to stay there.” ÔÇª

In Chasing Legends, contributor Ron Borges writes that Wladimir Klitschko doesn’t think about records and such. His job is to focus on his next opponent, which in this case is Alexander Povetkin on Oct. 5.

We do think about such things, though. And sometimes we marvel at what we discover: Klitschko recently passed Larry Holmes to become the second longest reigning heavyweight champion, behind only Joe Louis.

And while the great Brown Bomber is well ahead of Klitschko, nothing the dominating Ukrainian does surprises us any longer – even at 37.

Borges writes: “Considering Klitschko’s conditioning level and dominance in recent years, reaching those numbers is not beyond the realm of possibility.” ÔÇª

Contributor Gordon Marino recounts in Freedom Fighter ailing South African leader Nelson Mandela’sstrong connection with boxing and the fact he has inspired many of the sport’s biggest stars. ÔÇª

In Dempsey vs. Firpo: 90 Years later, new contributor Robert G. Rodriguez, Ph.D. provides a fresh look back at one of the most-discussed moments in boxing history.

Or as Rodriguez put it: “As boxing fans commemorate the 90th anniversary of this bout, THE RING re-examines published news reports and historical texts to better understand the controversies, media portrayals and significance of this historic battle in the context of 1920s America. ÔÇª

THE RING remembers the late Emile Griffith in Ahead of His Time, as contributor Bernard Fernandez looks back on the unusual challenges the Hall of Famer faced during his remarkable career. ÔÇª

In Road Warriors, Tim Smith writes about the grueling worldwide tour to promote the Manny Pacquiao-Brandon Rios fights on Nov. 23 in Macau, China. The fighters are upbeat going into a fight that could make or break their the careers. ÔÇª

Contributor Thomas Hauser writes in Billy Smith and the Case Against Boxing that the sport failed one of its own in Smith, a career “opponent” who compiled a record of 13-145-2 before committing suicide. ÔÇª

Hauser also put together The Greatest Modern Welterweight?, a fascinating poll of 28 boxing experts designed to determine the best modern 147-pounder. The winner won’t surprise you but some aspects of the exercise might. ÔÇª

And in Letters from Europe, Gareth A Davies’ column, Davies looks back on Darren Barker’s dramatic up-and-down journey to the middleweight title he won by defeating Daniel Geale on Aug. 17.